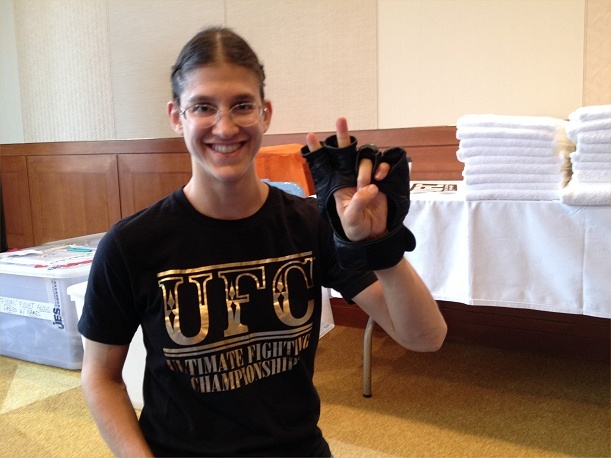 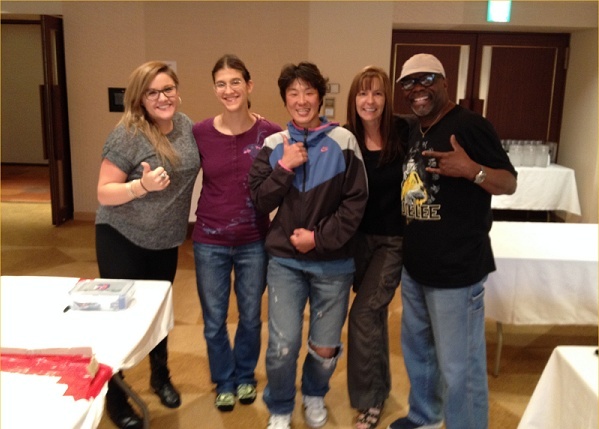 I had the honor of working as part of the UFC Fighter Relations Team for UFC Japan this September. I interpreted between English-speaking staff and Japanese fighters, and also between English-speaking fighters and Japanese media. I actually did so much more than that. Many teams such as Event Operations, Media, and Fighter Relations, etc worked together like well-oiled cogs in a clock tower which would countdown to the final time- the actual UFC event headlined by Roy Nelson and Mark Hunt.

Along with about six other guys, I was lead and directed by Mr. Burt Watson. When I first met Burt, I was set to fight in the TUF 20 finale, November 2013. I was so stressed out that I couldn’t appreciate his incredible attention to detail, and the thorough planning of him and operations staff Donna Marcolini and Amber Andrews. Burt patiently taught me so much, and can honestly say there’s no better person in the world better at his job than him.

Let me give some examples, and describe Fight Week – the week from Monday to the Saturday event.

We set up our headquarters in a conference room in a hotel in Shinjuku, with desks, laptops, and supplies. We put mats down in empty rooms on either side to be workout rooms for the red and blue corners respectively. Each room had one table on which rested water cups and towels. Burt explained that we put the tables up against the wall adjoining the office. Fighters like to do cage practice, so they tend to pick the mats up off the floor and lean them against walls. If they lean them against the shared wall, the staff in the office would be hearing “BAM! WHAM! BOOM!” all day long. The tables would block this. What foresight!

We set up three digital scales – one for each workout room and the official one in the office. Burt told me, “Make sure you check the scales by weighing yourself a few times every day, so if somebody complains about the scale not being accurate, you can say with certainty, ‘No, I checked it a few hours ago!’” He then gestured to the mats. “We clean the mats many times throughout the day, so if anybody complains about some skin infection, you can know for sure the mats were cleaned because you just cleaned them yourself!” 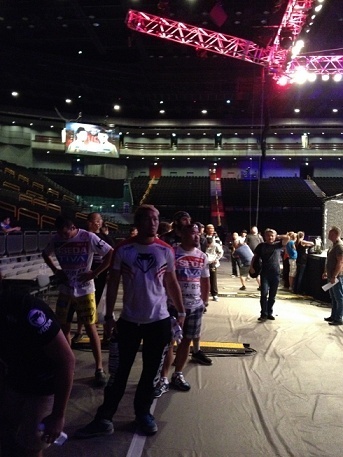 I helped put wrist bands on fighters and their cornermen, come fight day. “If their name isn’t on that list, they don’t get on the bus to the arena,” Burt emphasized with a shake of his head. “YOU stand by that bus door and CHECK! Somehow between the walk from the rules meeting to the bus, somebody always tries to join the group.” All cornermen should have filled up applications and registered by mail weeks before. A colleague showed me how to put the paper wrist bands on so as to not catch arm-hair by accident, but I kept botching it up and got a few yelps.

My first day on the job, our mission was to find 300 white towels, 30 black ones, about 300 bottles of water, 3 boxes of latex gloves, and pregnancy tests. The UFC provides each fighter with free water, 3 rolled up towels, latex gloves for their cornerman, and the women have to take pregnancy tests as part of the pre-fight medicals. Why black towels? “When we wipe blood off the canvas and it’s shown on TV, it looks worse to have white,” I was told.

Monday of fight week was a crazy shopping odyssey, and we got most of the stuff at a superstore called “Don Quixote.” I spoke to the short, skinny staff in Japanese and told him to bring up every box of water bottles in brand A that he had. His eyes wide, he got a hand-trolley and brought up four boxes of 20. “Not enough!” my colleague said. I told him to go back down there and bring up all the boxes in every other brand. Plus we emptied the shelves, despite other customers about to grab some. We took literally every single bottle of water they sold in that store, and every white hand towel.

Another of my tasks was ‘pulling posters.’ A few fighters gathered around a table where 100 fight posters were stacked. They all signed the top one. I slid that off, into a new pile further up the table, and they signed the next one. By the end of the process, which took around ten minutes, we all were annoyed with the guy who took the longest to sign their name.

I helped organize the fight gloves from the stock, based on what sizes people would probably need. After gloves were fitted and rolled up (to help break them in), they were hidden away in a secret spot only Burt knew about. “That way if someone says someone tampered with them, I can say, ‘Nope, I knew where they were the whole time,’” Burt explained.

During fight week, we had time scheduled for fighters to do a pre-weigh-in weight check, and bring their fight clothes and banners to the commissioners. They would check to make sure there were no prohibited sponsor logos, for example drugs or something unacceptable. One of my jobs was to call the fighter’s hotel rooms if they were late, or if we needed to give them a reminder message. I wasn’t fond of this task because I felt like I was bothering the fighters. It had to be done! Nobody acted annoyed with me, though. I knew about half the fighters personally from having lived in Japan for eight years, and either meeting them around or training with them.

I went to media day and interpreted interviews. First, I helped Gomi-san talk to an English-speaking reporter. Then, I was called over to another seat and helped Roy Nelson speak to a Japanese reporter. It was quite a challenge to do live translation!

In the middle of Fight Week, the team visited the venue to check out the layout of locker rooms. Burt had to decide who would stay in which locker room, which was way more complicated than I thought. He had me take notes on how many rooms there were, which ones had bathrooms and which didn’t, how many fighters could fit in a room, and more. It was best to put all the fighters managed by the same manager in one room. Put the ladies near different women’s bathrooms- didn’t want them to run into each other. Put opponents on opposite sides of the hallway, etc. I was surprised how much thought went into it. 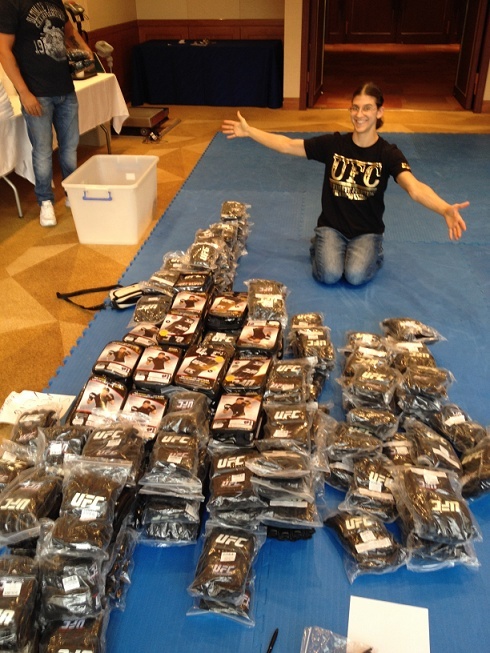 On fight night, my job became to monitor the locker rooms. If I saw somebody eating, I had to ask them to eat in the hallway so we could watch. They couldn’t take medicine, supplements, pain medicine that might thin the blood, diuretics, etc. I had to translate all that to the Japanese fighters. I had to ask them to hurry up and wrap their hands so the commissioner could check and sign off on them. The most unpleasant thing I had to do was approach a fighter who had just lost five minutes ago and ask them to take a randomly assigned drug urine test. I wished I could have given them more time to recover. The emotion on their face that was raised up to me as I spoke was heartbreaking. I knew it well. Their coach snapped at me to wait a minute, and I felt even worse. But it had to be done.

Fight promotions like the UFC and their fighters have a very interesting relationship. The UFC allows the fighters to make their dreams come true by giving them a stage and audience, while the fighters provide entertainment and revenue. It takes a lot of work to put on an event, and it was interesting to be a part of the biggest fight organization in the world.
It was definitely strange but interesting to go from “fighter” to “staff/organizer.” It had its fun moments and not so fun moments, but I feel like I have an unusually deep understanding of the business of mixed martial arts. I can tell you that next time I fight, I will have all my medicals and my cornermen’s registrations turned in a month ahead of time, I will be early for all meetings, and I won’t try and smuggle food into the locker rooms. Well…I can’t promise that last one.