For the seventh consecutive year, Fighters Only Magazine is pleased to announce it will give the most dedicated and loyal fans in all of sports – MMA fans – a night of glamour and surprise that belongs exclusively to them. Fighters Only proudly presents “The Seventh Annual World MMA Awards” Friday, January 30, 2015 live from The Venetian Las Vegas.

“Seven years ago, Fighters Only launched the ‘World MMA Awards’ as a way to honor fighters, fights, personalities and promotions and to celebrate this modern day sports phenomenon called mixed martial arts,” said Rob Hewitt, President and CEO of Fighters Only. “This year we return to The Venetian Theatre and the ‘Fight Capital of the World’ Friday, Jan. 30, for another star-studded, black-tie event dedicated to MMA and all the incredible fans of our sport.”

As with previous events, Fighters Only once again gives fans the power to determine who takes home a World MMA Award. Starting Monday, Dec. 22, fight fans can cast their votes through the official website now live at www.WorldMMAAwards.com. This year, there are 22 Award categories, including Fight of the Year, Knockout of the Year and Fighter of the Year. Fan voting begins precisely at 12:01 AM EST Monday, Dec. 22.

“Always, the biggest moments of the Awards is finding out who the fans voted in as the winners,” said Hewitt. “StartingMonday, Dec. 22, anyone can cast a vote through  WorldMMAAwards.com  and help their category favorite take home an Award.”

This year, for the first time ever, the MMA Awards reflects a full calendar year of action. Event categories will include everything that transpired from Jan. 1, 2014, to Dec. 20, 2014. This gives the Seventh Annual Awards status as the most accurate and comprehensive event in Fighters Only history.

Last Year’s MMA Awards played host to the relative ‘who’s who’ of mixed martial arts. One by one, the most popular stars in the sport stepped onto the red carpet under the world media spotlight. Fighters Only expects this year’s Awards show to be even bigger and grander in its second showing at the famed Venetian Theatre.

BodyBuilding.com, as the internet’s most visited health and fitness site and largest online retailer of nutritional supplements, is proud to sponsor this strictly black-tie Seventh Annual World MMA Awards event. RDX, one of the most exciting international fight sports equipment and apparel manufacturers, is also pleased to sponsor the World MMA Awards. 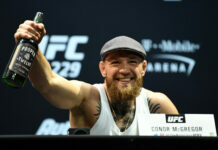