“A setback is a setup for a comeback”

This blog series will serve as a lead up to my upcoming rematch on March 28th at Battlefield Fight League 35. I hope to give you some insight into the mind of a Mixed Martial Artist as I look to avenge a fight I lost last year. While I’ve had success in winning my professional debut since then, avenging this particular loss has been on my radar.

First, a quick introduction. My name is Craig Maclean, a professional Mixed Martial Artist fighting out of Revolution Martial Arts in Langley, British Columbia, Canada. I was first introduced to martial arts, specifically Brazilian Jiu-Jitsu when I was 17 years old. After a few years back and forth with training – which saw a little amateur boxing experience – I’ve fully dedicated myself to this sport for the past 5 years.

I’ve been competing on the regional circuit since 2011, which was highlighted by becoming Battlefield Fight League’s first amateur Bantamweight Champion.

After seeing a couple of fights fall through, I was slated to defend my title against Nick Ghaeni, a wrestling standout with a 3-0 record. While I had never trained with Ghaeni, he was a familiar face to many of my training partners who had spent previous years training with him at my current home of Revolution. Had he been a well-liked training partner of them, I don’t think the excitement and anticipation of this fight would have been so high. But those are stories that remain in the gym.

While Ghaeni didn’t have as many fights and experience on paper as I did, I knew he had been wrestling most of his life and training in Mixed Martial Arts much longer than I had been. The consensus among most was I had more cage experience, the more well-rounded fighter, and the better athlete – for him, his wrestling pedigree and the fact that he was undefeated.

I knew this was going to be my toughest test so I made sure to focus on the weaker parts of my game. We brought in a new wrestling coach, Gurveer Talhan (who had previously trained with Ghaeni), and some amazing training partners who would push me everyday.

There was a lot of build up to the fight that was highlighted by his pre-fight press-conference remarks. The fact that I was considered the favorite by some, or that I was considered better in certain areas seemed to baffle him. I left the press conference wondering if he was trying to hype up the fight or if this guy was straight up nuts! But it did serve to light a fire under me for the last stretch of camp.

You can take a look at the press conference here:

Come fight day (August 23, 2014), I remember being at the gym getting ready to head to the venue and my coach telling me that I should take comfort in the fact that I did everything right this fight camp. I trained my ass off, but at the same time trained smarter than I ever had before.

Going through all the pre-fight and warm-up jitters, confidence (then back and forth multiple times), as soon as the cage door closed I felt comfortable and ready to fight.

I came out and landed two uppercut-left hook combinations. Looking into his eyes after the second combination, I remember thinking he didn’t like that and I anticipated he’d look for the takedown. He threw a smart, short left hook, which stunned me and was a flash knockdown. I immediately jumped back up and he took my back while standing. He looked for the suplex, which I defended but ended up down on my knees. He landed a few quick hammer fists to the back of my head and the ref stopped the fight. I still believe the stoppage was too quick, but the bottom line is he had his hand raised at the end of the night and took the W.

I’ve lost before but after feeling 100% prepared and knowing I had done everything right leading up to the fight was what made the loss so tough for me. But that’s what makes this sport so exciting – anything can happen on any given night. It’s the highest of highs and the lowest of lows. And I’ll go on, fight again, and get my redemption for this loss.

Next time I’ll pick up on my successful pro debut and my training for the upcoming rematch.

I just want to give a quick thank you to my amazing sponsors who have supported me: 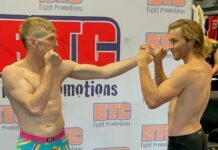 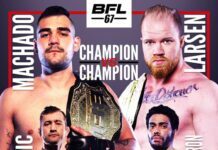