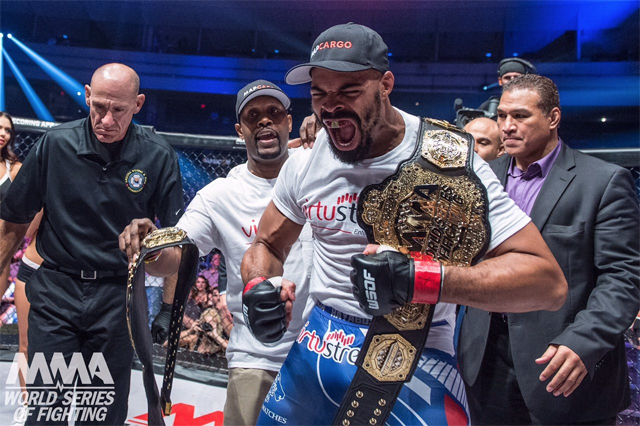 The vacant welterweight title will be on the line as veterans of the division Jon Fitch and Jake Shields meet in the main event. The co-main event sees current two-division champion David Branch defend his middleweight title against the streaking Clifford Starks.

Shields (31-8-1, 1NC) started off his WSOF run with two first round submissions over Ryan Ford and Brian Foster before challenging Palhares for the title. He went onto lose in the third round due to submission, Palahares got suspended and his belt vacated for his actions both during and after the fight.

Fitch (27-7-1, 1NC) had a rough first year with World Series of Fighting in 2013. After getting choked unconscious by Josh Burkam in under a minute in his debut, Fitch went onto win a somewhat controversial split decision over Marcelo Alfaya. After this he beat Dennis Hallman by decision in a catchweight bout before getting submitted by then champion Rousimar Palhares. In his most recent outing, Fitch welcomed Yushin Okami back to the welterweight division, beating him by UD.

Branch (17-3) has been perfect in WSOF. Debuting at WSOF 1, Branch began his run with 3-straight decision wins over the likes of Jacoby, Filho and Villefort. Since the Villefort fight in 2013, Branch has not gone to the judges scorecards, finishing Jesse Taylor, Yushin Okami, Jesse McElligot and Teddy Holder. Branch won both a middleweight and light heavyweight WSOF tournament to become a two-division champion. He has yet to defend his light heavyweight title, but will attempt to make his second middleweight title defense at WSOF 29.

Starks (13-2) has remained unbeaten since losing to current UFC middleweight contender Yoel Romero in 2013. Following the UFC release, Starks went to Bellator MMA where he went 2-0 prior to stopping Jake Heun in his WSOF debut at WSOF 19 in March of this year. Since his successful debut earlier this year, Starks has won two-straight, picking up decisions over Krasimir Mladenov and Mike Kyle.