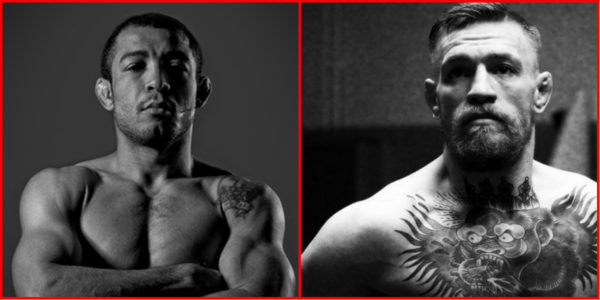 The upcoming three-day string of UFC events—which begins tomorrow on Fight Pass and culminates with the most compelling back-to-back title fights in the organization’s history at UFC 194: Aldo vs. McGregor—answers a question nobody was really asking: “What could possibly make you more giddy than the first Star Wars movie in 10 years coming out next weekend?”

UFC Rundown: Short predictions for the top 3 fights on the next 3 cards

In celebration of this impending cavalcade of artful violence, I’ve opted to break down the three most interesting fights on all three cards.

As usual, every fight breakdown is done in five sentences or less.

#3 Rose “Thug” Namajunas (+150) vs. #7 Paige “12 Gauge” VanZant (-175): Few were disappointed when the UFC announced Rose Namajunas as a replacement opponent for Paige VanZant when her original dance partner, #8-ranked women’s strawweight Joanne Calderwood, pulled out due to injury a little under a month and a half out from their contest. After three strong showings under the Zuffa banner, “12 Gauge” was primed for a step up in competition. While Calderwood’s kickboxing-centric skill set matched up favorably with the surging 6-0 prospect’s pressure-heavy offense, the same cannot be said for Namajunas, whose 3-2 record betrays a combative acumen of uncommon tricks and counters VanZant has yet to encounter. VanZant’s a pitbull of a fighter, however, and her time training with the best small man group in MMA should provide her with a game plan that likely incorporates the small cage being used both at this event and in the TUF 22 Finale to undermine Namajunas’s relative strengths. VanZant by (T)KO.

#14 Jim Miller (+105) vs. Michael “Maverick” Chiesa (-125): Yes, Chiesa is the taller, younger fighter and his reach, striking accuracy and takedown game are all better than Miller’s. However, Miller has only ever lost once—once—to an opponent who has neither held the 155 lb. strap or at least challenged for it. At 32 and with almost as many fights behind him, he is certainly the less fresh fighter, but with Chiesa’s “wins by KO” percentage residing at exactly zero, Miller has one less avenue to worry about the fight going down, and for a fighter of his caliber that is a pivotal advantage to have. Miller by UD.

#5 Aljamain “Funk Master” Sterling (-650) vs. #10 Johnny Eduardo (+475): He may be talking early retirement, but until he hangs up the 5 oz. gloves “Funk Master” remains one of the most promising bantamweights on the planet, who with just a smidge more fine-tuning could pose a legitimate threat to the 135 lb. title. However, he’ll have to get past Nova Uniao product Johnny Eduardo, who is back after surgery layoff for a torn labrum in his left shoulder, is no pup and his 38 fights more than provide enough resources for Serra-Longo to do their homework. Don’t expect a finish; Eduardo hasn’t been put away before the closing bell in more than eight years. Sterling by UD.

#2 Frankie “The Answer” Edgar (-138) vs. #3 Chad “Money” Mendes (+118): Though overshadowed by UFC 194: Aldo vs. McGregor—possibly the most stacked card since UFC 100 back in 2009—the fact that this bout still has fans fidgety in anticipation is a testament to how outstanding a matchup it is. Pursuing his quest to be a two-division champion like the man he unseated for the 155 lb. title, Frankie Edgar will all but solidify his claim to a second crack at the title with a victory over “Money,” provided the belt remains around Aldo’s waist. For Mendes, the trip back to title contention is considerably longer; he’s lost twice to the champ and once, convincingly, to the challenging interim titleholder. Their respective speed might be close to identical and the power might favor Mendes, but it’s hard to pick against the remarkably still-improving Edgar, whose savvy in the pocket and some of the best transitional takedowns in the game should have Mendes flinching in perpetuity by the end of the second round. Edgar by UD.

#6 Edson Barboza (+155) vs. #7 Tony “El Cucuy” Ferguson (-180): You know what Edson Barboza has proven to do insufficiently? Fend off pressuring, technical brawlers like Tony Ferguson, who saw his sure-to-be title eliminator matchup against Khabib Nurmagomedov evaporate after the North Caucasian pulled out due to a knee injury—his second since trouncing current lightweight champ Rafael dos Anjos. Since dropping a decision loss to Michael Johnson back in 2012, Ferguson has been on an absolute tear through the densest division in the organization. Barboza is no doubt a stiff test, but his chin won’t hold up against “El Cucuy’s” onslaught. Ferguson by (T)KO.

Joe Lauzon (+160) vs. Evan Dunham (-185): Both Lauzon and Dunham have only ever lost to the best at lightweight, but they’ve surprisingly never fought until now, when both reside outside the top 15 of the division in which they’ve spent a combined 57 fights. Dunham poses some serious problems for Lauzon, whose gameness, grit and IQ has brought him a tremendous distance in his 11 years earning a living inside a cage. Dunham’s pressure and wrestling advantage should see Lauzon’s back hit the mat on more than one occasion, and the problem is Dunham can likely can replicate the circumstances that led to that happening at will. The Eugene, Oregon native’s sturdy chin and near imperviousness to submissions, outside of the starkest of circumstances, just seals the deal that much more—an unfortunate thing for fans of Lauzon, like myself. Dunham by UD.

(C) Jose Aldo (+107) vs. “The Notorious” Conor McGregor (-127): Reading Shaun Al-Shatti’s collected oral history of fighting Aldo, one thing seems to get pulled into focus more than anything else: the mystique—the aura of Aldo—is reminiscent to that of a prime Anderson Silva’s in terms of how effective it is in preemptively defeating his challengers. By the time they enter the Octagon, his opponents are shaking in their proverbial boots at the prospect of being on the receiving end of one of his notoriously brutal leg kicks, hitting nothing but air as a result of his superlative head movement and footwork and, possibly more than anything else, bearing firsthand witness the effects of pure, perfect explosiveness when bone collides with bone with bad intentions behind it. But in McGregor we find a man with Muhammad Ali confidence, whose wake of destruction arguably overshadows the defending champion’s in terms of unconscious opponents brutally rendered helpless. Huge for his division and already with his eyes set on the next divisional mountain, McGregor’s stalwart confidence, bolstered by a momentum of activity his dance partner can’t currently match, is a legitimate factor in this bout. His unparalleled, brain-rattling power, superior reach, granite chin and fearlessness in the exchange spell an early disaster for the pound-for-pound king, whose dethronement may very well reframe the entire complexion of the sport. McGregor by (T)KO.

(C) “The All-American” Chris Weidman (-145) vs. #1 Luke Rockhold (+125): Weidman vs. Rockhold feels different because it’s the first title bout featuring two in-prime UFC middleweights not named “Silva” in, like, forever. You remember that time-tested tenet about the wrestler’s advantage in both the threat and follow-through of transition–the threat of striking opening up the grappling game and vice versa? It’s still in play here—heavily; it’s why it’s all Rockhold can seemingly talk about when discussing the way their skills align. The Californian’s best offensive weapon against the champion is his powerful body kick, but if caught the strike turns into a significant disadvantage for the AKA product, who does his best ground work from top position and will find himself vulnerable if his attack is intercepted. Look for the negligible range difference to be undermined by superior ring generalship and pressure by “The All-American,” who will catch the challenger cleanly against the cage for a knockout before the fourth round begins. Weidman by (T)KO.

#2 Ronaldo “Jacare” Souza (-149) vs. #3 Yoel “Soldier of God” Romero (+129): The outcome of this bout, featuring two brilliant athletes with contrasting grappling backgrounds, relies on a factor which rests comfortably in the breast pocket of one Yoel “No Forget Jesus” Romero. Souza’s striking has improved, but his biggest knockout win—Yushin Okami—just lost to welterweight Jon Fitch. Basically, to win, he’s got to put Romero on his back–a tall task indeed. About as decorated a wrestler possible, short of earning an Olympic gold medal (he won silver in 2000 and has defeated three different Olympic gold medalists since),l the Cuban American Top Team product Romero has only headstrong sloppiness to work on and, at 38, Father Time to worry about. Judging from the leaps he’s made from fight to fight, culminating in his murderous bludgeoning of former light heavyweight champion Lyoto Machida in his last outing, he’s a lock for the next shot at the 185 lb. title, provided the belt stays in Long Island. Romero by (T)KO.

(All photos used are not the property of MMASucka.com and will be removed upon request by their rightful owners.) 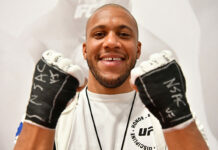