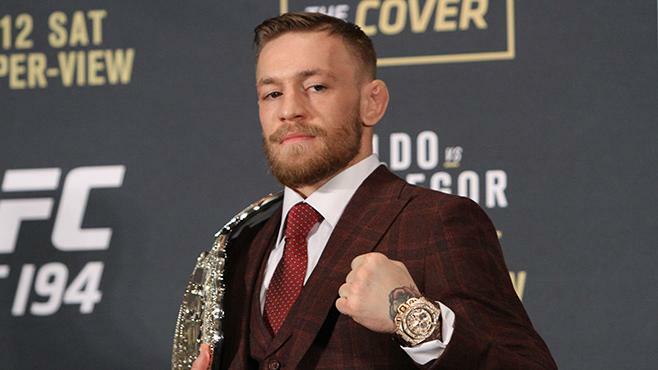 Old-time gambler Pug Pearson spoke of the “choking point.” The choking point was on display during a skins game he played against three competitors. At the 18th tee, Pearson was up two holes on one man, one hole on another, and even with the third. Pearson teed off first and hit a drive that ricocheted off a tree branch, sending the ball backward some fifty yards. After a minor tantrum and a round of ribbing, Pearson suggested they press all bets. The other players agreed…then proceeded to do something they hadn’t done all day: slice their drives well into the rough. They, according to Pearson, couldn’t keep their minds off the money.

At the post-fight press conference, Conor McGregor told the media the following:

It’s not the same when you sign to fight me. It’s a whole other ballgame. It’s a completely different pressure bubble you’re under. And he felt that. A guy that’s been on top so long, ten years undefeated, the company’s only champion, he felt the pressure like he’s never felt before. That’s cause he was facing me.

Consider Aldo’s position. He’s openly talked about establishing a legacy as the greatest fighter of all time. Then the greatest challenge to that legacy stands in front of him…with an exponentially greater level of attention than he’s ever received in his entire career.

This isn’t to diminish McGregor’s victory. Nor is it to suggest that Aldo “cracked.” But maybe he pressed a little more than usual. Maybe his mind wasn’t 100% focused on the task at hand. It’s those types of small edges that a fighter like McGregor or a gambler like Pearson feeds off of. That human element. The choking point.

One narrative heading into UFC 194 was what would happen post-UFC 194 given the various outcome permutations. Dana White promised Frankie Edgar the next crack at the featherweight crown after finishing Chad Mendes. But “get it in writing” has never been more apt advice than a fighter dealing with the UFC, and one only had to imagine some combination of close and controversial that would necessitate an immediate rematch between UFC 194’s main eventers.

While there was nothing close or controversial with Saturday’s result, Jose Aldo was right when he told Joe Rogan, “There was really not a fight, so we need to get back in here.”

What we saw on Saturday was a sample size of 13 seconds. This wasn’t UFC 193, where Holly Holm spend five-plus minutes dominating Ronda Rousey before finishing her off with a head kick. If we ran this fight back a million times, McGregor sleeping Aldo within Vine Time is hardly indicative of the general long-term trend.

And nevermind that a McGregor-Aldo rematch is much bigger business than McGregor-Edgar. McGregor was respectful and complimentary of Edgar and his skills in the post-fight press conference, though you can imagine him turning on the promotional charm when necessary. But can you imagine McGregor trash talking Aldo in a rematch? Hanging last night’s result over his head for another two-month promotional blitz? Perhaps co-headlining UFC 200 with Holm-Rousey II? Madness.

It’s fair to say 2015 was the Year of Ronda Rousey. And 2016 is shaping up to be the Year of Conor McGregor. But where Rousey’s year was about her ascent into mainstream stardom, McGregor’s year may be about a UFC star aggressively negotiating his leverage with the promotion for the first time.

We’re seeing early warning signs. McGregor may have refused to wear the standard Reebok kit at UFC 189. He’s insinuated he wants to co-promote events with the UFC. Last night, it appeared UFC co-owner Frank Fertitta slammed the belt at the finish. During the post-fight press conference, McGregor said he would refuse to vacate the featherweight title if he moved up to fight for the lightweight belt.

The UFC and McGregor may come to amicable terms. But some are suggesting McGregor’s paydays may hit $20 million. The UFC has done well to keep those numbers secret, but given McGregor’s fight persona, do you believe he will keep his new-found fortune under wraps? And what would that do to the market?