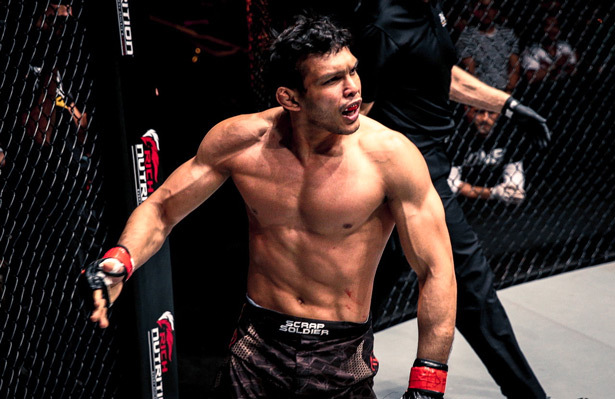 ONE CHAMPIONSHIP RETURNS TO JAKARTA FOR ONE: TRIBE OF WARRIORS ON 20 FEBRUARY

CATCH ALL THE ACTION LIVE IN INDONESIA ON RCTI

06 February 2016 – Jakarta, Indonesia: The largest sports media property in Asian history, ONE Championship™ (ONE), has just announced its return to Jakarta with ONE: TRIBE OF WARRIORS. Set to take place on 20 February at the Istora Senayan, the card features an international main event headlined by welterweights Luis “Sapo” Santos and Rafael “The Machine” Silva. In the local main event, Dutch mixed martial arts veteran Vincent “Magnivincent” Latoel takes on the hard-hitting Kotetsu “No Face” Boku of Japan, while in the Indonesia Warrior Bout, Mario Satya Wirawan of Bogor, Indonesia will square off against countryman Yohan Mulia Legowo.

CEO of ONE Championship, Victor Cui stated, “Jakarta will always be one of our favorite destinations because of its energy and passion for mixed martial arts. ONE: TRIBE OF WARRIORS is set to bring out the best in our local and international ONE Superstars, and we’re excited to give fans another evening of electrifying mixed martial arts action.”

Luis “Sapo” Santos is a mixed martial arts veteran from Brazil with over 70 professional fights on his record, and over half of his wins ending by either TKO or KO. With a black belt in Brazilian Jiu-Jitsu and a penchant for spectacular finishes, Santos made a successful ONE debut with a highlight-reel knockout of Bakhtiyar Abbasov. Known for his aggressiveness and brute strength, Santos looks to wreak havoc inside the ONE cage. He’s set to take on the tough Rafael Silva in his next bout.

Rafael “The Machine” Silva of Portugal has a wealth of experience competing in different promotions over almost 15 years of professional competition. Silva has amassed 40 wins and just 15 losses against some of the toughest opponents. He now goes up against one of the strongest welterweights in the division, putting his grappling skills to the test against the hulk-like Luis Santos.

Vincent Latoel was successful in his last bout, scoring an emphatic second round TKO over a game opponent. The 36-year-old mixed martial arts veteran is in his 15th year as a professional fighter and is looking for success in his next bout, this time against hard-hitting Kotetsu Boku.

Kotetsu Boku of Shizuoka, Japan is never in a boring fight. The MMA standout from Krazy Bee is one of the toughest competitors in the promotion, and he is coming off an impressive victory over highly-regarded Major Overall of the United States. Now, Boku will once again put his striking skills to the test against Dutch fighter Vincent Latoel in a 71.5kg catchweight bout.

Mario Satya Wirawan of Bogor, Indonesia recently recorded the fastest knockout victory in ONE Championship history with a six-second stoppage of Chan Heng last December. The former university soccer player is on the right track in his young MMA career and is aiming to stay in the winner’s column when he takes on countryman Yohan Mulia Legowo in the evening’s Indonesia Warrior Bout.

Yohan Mulia Legowo from Central Java, Indonesia is looking for his first win inside the ONE Cage. The Kung Fu and Boxing practitioner is also a well-rounded grappler incorporating various techniques from wrestling, Judo, and Jiu-Jitsu. Legowo suffered a couple of setbacks in his last two fights but will look to put his full array of offensive weapons on display when he takes on fellow Indonesian, Mario Satya Wirawan.

Anthony Engelen is a Dutch fighter who trains full-time in Indonesia. Engelen’s strength lies in Brazilian Jiu-Jitsu, usually making his overall game a potential war of attrition on the ground. Engelen was met with a recent setback, but he now looks to advance his position in an extremely stacked division. Standing in his way is the Philippines’ Rocky Batolbatol.

Rocky Batolbatol of the Philippines is a former professional boxer who has transitioned into mixed martial arts. The hard-hitting Filipino constantly uses well-placed combinations in search of spectacular knockouts and will be looking for a stoppage against his next opponent. He’ll have his hands full with Anthony Engelen, who is a technical grappling ace.

Marcin Prachnio from Poland is a mixed martial artists with a 9-2 professional record. He is a victor of his last four bouts and has a whopping seven stoppage wins. Always looking for the finish, Prachnio will make his ONE Championship debut against Brazilian submission specialist, Alexandre Machado.

Alexandre Machado of Rio de Janeiro, Brazil is a mixed martial artist with a 7-1 record. What’s even more impressive is his ability to finish opponents either by knocking them out or submitting them. Out of seven total victories, Machado has only reached the distance once in his young career. The Brazilian finisher is set to take on Polish fighter Marcin Prachnio.

Japan’s Koetsu Okazaki is a mixed martial arts veteran who has faced the best fighters in his division in ONE Championship. The Japanese fighter currently holds a 10-4 record and has experience facing the likes of Yusup Saadulaev, Kevin Belingon, and ONE bantamweight world champion Bibiano Fernandes. His next opponent is a tough one – New York’s Andrew Leone.

Andrew Leone of Cortland, New York trains at Bali Muay Thai & MMA gym with some of the most talented athletes in Asia. With a standout record of seven wins and only two losses, Leone is coming off two spectacular victories over solid opponents in Geje Eustaquio and Shinichi Kojima. In his next bout, Leone will be put to the test against Japanese veteran Koetsu Okazaki.

Angela “Unstoppable” Lee is originally from Singapore but has lived and trained in mixed martial arts in Mililani, Hawaii. Lee is one of the most promising young fighters on ONE Championship’s growing roster and has impressed inside the ONE cage with her all-round striking and grappling skills. She looks to impress fans once again as she battles New York’s Rebecca Heintzman.

Rebecca Heintzman of Binghamton, New York is a 29-year-old female strawweight making her ONE Championship debut. With great all-round skills, Heintzman had a solid amateur career, transitioning well into professional MMA. Heintzman’s full arsenal should be on display as she faces one of the most promising young fighters in 19-year-old Angela Lee.

Bashir Ahmad is widely known as the ‘Father of Pakistani MMA’. He is extremely quick and relentless with his striking and will look to overwhelm opponents from the beginning of the match. He is a ONE Championship veteran and features a full range of striking and grappling skills. His next challenge will be against the Philippines’ Jimmy Yabo.

Jimmy Yabo is a former URCC standout with an impressive mixed martial arts record. He boasts one of the best knockout percentages in the division, having finished all four of his opponents when victorious. Yabo has had a few heartbreaking setbacks, but he’s back in the ONE Cage, dedicated and looking for victory. He’ll take on Bashir Ahmad in what should be an action-packed matchup.

Djatmiko Waluyo of Mexico City, Mexico is of part-Indonesian descent. He is unbeaten at five wins and no losses. Of his five victories, two have come by knockout and two by submission, making him both a threat as a striker and a grappler. Waluyo makes his ONE Championship debut against the heavy-handed Trestle Tan in his return home to the capital city of Jakarta.

Trestle Tan of Manila, Philippines is one of the hardest punchers in his weight class. With two knockout victories and one submission victory on his record, Tan is a highly-skilled opponent for any fighter. Tan has had two setbacks recently, and is now looking to get back in the winner’s column with a victory over Djatmiko Waluyo.

Jerome S. Paye of Liberia and Li Hao Jie of China will kick off ONE: TRIBE OF WARRIORS with an intense bantamweight battle to set the tone for what should be an amazing event.