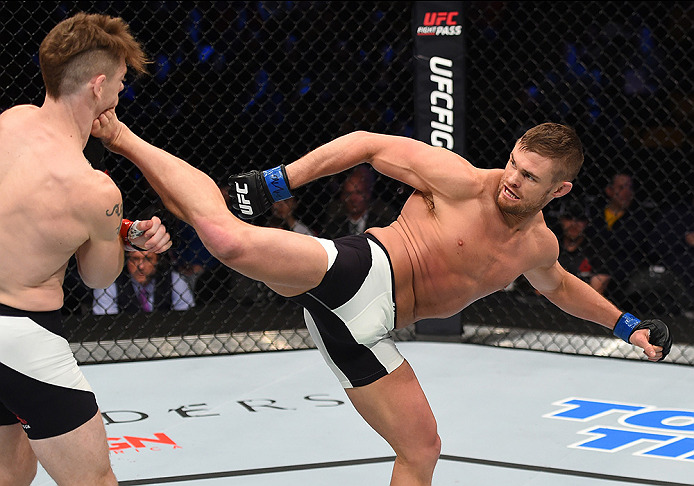 This morning at a press conference, Rizin Fighting Federation announced multiple bouts for their April 17 show, as well as two new signings in the form of always-exciting lightweight Daron Cruickshank and heavyweight Chris ‘Huggy Bear’ Barnett.

Multiple fights added to RIZIN FF 1 next month, including debuts for Daron Cruickshank and ‘Huggy Bear’

Here is the post on the Rizin website for those who were not able to watch the press conference.

Cruickshank (16-8, 1NC) will bring his exciting style from the UFC cage to the Rizin FF ring to take on former Shooto champion Shinji Sasaki (16-8-3). The 13-fight UFC vet has lost three-straight and has not tasted victory since October of 2014 where he beat Anthony Njokuani in Halifax, Nova Scotia. Sasaki is currently riding a three-fight win streak and most recently took out Won Sik Park via KO in 40 seconds at ROAD FC 29 two weeks ago.

Chris ‘Huggy Bear’ Barnett (14-2) will also make his debut on the card, and he’ll be taking on ‘Baby Fedor’ Kirill Sidelnikov (8-4). 29-year-old Barnett is is a real knockout-artist, with 12 of his 14 wins coming by way of KO, including a first round knockout over Shinichi Suzukawa in his most recent outing at Inoki Bom-Ba-Ye 2015 on NYE. 27-year-old Sidelnikov is coming off of a big first round knockout over Carlos Toyota at ‘RIZIN FF WGP 2015: Day 1’ in a fight that was his first in five years.

24-year-old Teodoras Aukštuolis (8-3) will also return to action as he takes on Jaideep Singh (2-1). Aukštuolis was a RIZIN 2015 WGP semi-finalist, scoring a big KO over Jungle Fight champion Bruno Cappelozza on Day 1, he went on to lose to former Strikeforce champion and current Bellator LHW Muhammad ‘King Mo’ Lawal on Day 2 via decision. 6’5 Singh (2-1) also fought for RIZIN on NYE, as he headlined the three-day event opposite arguably the greatest fighter of all time; Fedor Emelianenko in a losing effort. Prior to this, Singh was most known for his 40-10 kickboxing record which saw him KO Sergei Kharitonov to win the K-1 WGP 2010 Final.

Another RIZIN 2015 WGP semi-finalist will return to action in the form of 23-year-old Russian Vadim Nemkov (4-1) as he takes on Sweden’s Karl ‘King’ Albrektsson (4-0). Nemkov made his Rizin debut on Day 1 of the 2015 WGP in the quarter-finals, knocking out former KSW LHW champion and UFC-vet Goran Reljić in the first round. On Day 2 in the semi-finals Nemkov lost to Jiří Procházka following an entertaining ten-minute battle. Albrektsson is a solid and athletic young fighter who is as well-rounded as they come for a guy with such limited experience. It’s also worth noting that Albrektsson has competed in some Shootfighting bouts which aren’t on his record.

And finally, jiu-jitsu ace Gabi Garcia (1-0) will return to action under the Rizin banner against Russia’s Anna Malyukova (1-0) in a light heavyweight contest. Gabi Garcia took part in the Rizin Fighting Federation show in December and took out Lei’D Tapa via knockout. Finding information on Malyukova is a bit tough, but she also won her debut MMA fight via (T)KO, and, according to Karim Zidan of BloodyElbow; trains out of Gladiator Fight Team Belgorod. She also won the Russian MMA Championship and the World Cup of MMA in Russia.

RIZIN 1 takes place on April 17 in Nagoya City, Japan. The event will feature intriguing match-ups, including a two-on-two grappling match that involves Wanderlei Silva and Kazushi Sakuraba. Also on the card, the return of Kazuyuki Fujita, Jiří Procházka and Yuki Motoya, as well as the debut of Bellator’s Hisaki Kato.