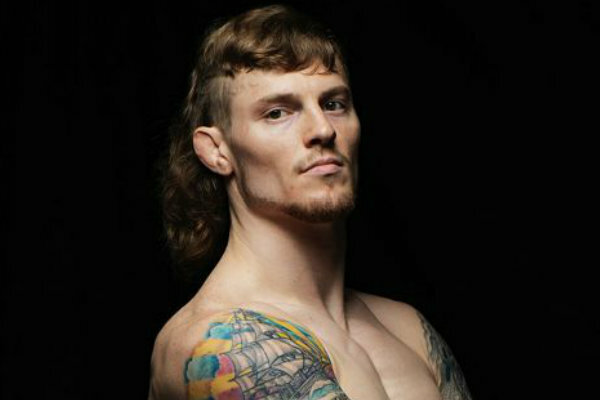 Steve Montgomery is due for a resurgence.

Last year was a wash for the 25 year old mixed martial artist. One of the more promising prospects on The Ultimate Fighter: American Top Team vs. Blackzilians, based on his then 8-2 record, the ATT stable member was forced off the show prematurely due to medical issues and failed to secure wins in his two subsequent Octagon appearances. The UFC released him shortly afterwards.

A string of injuries followed. He broke the big toe on his left foot—a fracture that split the toe up the middle six ways like a hollow-point bullet into the tarsometatarsal joint—and partially tore his posterior cruciate ligament (PCL) and meniscus in his knee. He’d come so close—so damn close he was there—but it seemed then that Steve “The Creepy Weasel” Montgomery couldn’t catch a break.

“I celebrated getting into the UFC a little early,” he conceded to MMASucka.com.

You get the sense about Montgomery, a self-professed hippie surfer on hiatus, that he’d find the silver lining in even the darkest cloud.

“I had some injuries after my last fight and just threw the whole year out. Now I’m hungry. I feel like I’m coming into my own as a fighter. I learned a lot last year and I’ve already paid taxes, so it’s time to get what’s mine. I’m coming hard this year.”

Montgomery is back on the regional circuit with a planned bout this Friday against Avery “The Irish Hurricane” McPhatter at Absolute Fighting Championship 25. Despite sharing the same relative stomping grounds, the two have never fought under the same banner. However, their similarities are difficult to ignore. They’re still decently young in the sport (McPhatter is 27 and both he and Montgomery debuted in 2010), are rangy (Montgomery is six-foot-four; McPhatter, six-foot-two) and both men have recently opted to forego the rigors of severe weight cutting in favor of competing in a division more befitting their frames: middleweight.

“Weight cutting is just not my personal favorite,” he said. “I really think it takes away from the enjoyment for me. If it’s more than getting in a sauna a couple of times while you’re actually hydrated, then I don’t want anything to do with it. At 185 I can still use my reach. I like being the taller guy, but I don’t mind mixing it up with taller guys. I have a ton of confidence in myself as a puncher, long and on the inside.”

While McPhatter isn’t known for his punching power (he’s only won once by TKO) his newfound success at 185 pounds is filled with finishes—submission wins over Mark Inge, Raul Amaya and Joel Cooper and the aforementioned stoppage by strikes against Keith Schneider. Appropriately, Montgomery isn’t expecting an easy fight.

“I’d be mistaken if I [went into our fight thinking] he was the same guy,” he said. “He came up two weight classes, is on a five-fight win streak and finished a bunch of tough guys. I’m sure he’s got some new tricks up his sleeve.”

His plan for this bout is simple: just win.

Past that, his long-term fight career goal is to keep a promise he made to a certain follicly challenged Zuffa president while on the flight back from Australia following UFC 193: Rousey vs. Holm.

“On the plane from Australia, I ran into Dana [White] by accident,” he said. “He was on the same flight. I told him, ‘I’m not going to ask you for anything, but if you guys cut me, don’t worry; I’ll be back next year and I’m going to show you what you’ve got your hands on.’ Rafael dos Anjos went 0-2 in his first two UFC fights and look at him now. I’m very confident and I know when I come [back] to the UFC this year I’m going to smash some guys.”

Outside of the cage, Montgomery is making final preparations for a new venture he’s planned on for quite some time: “The Weasel’s Tale,” a podcast borrowing equal parts from Joe Rogan’s The Joe Rogan Experience and Bill Burr’s Monday Morning Podcast.

“The first one, I’m just going to talk about the last year as a whole, what kind of made me want to do a podcast and that’ll be it. From there on out I’ll have a guest every time. The guest, it’ll definitely be MMA related, but at the same time I know so many friends from such crazy backgrounds. It’ll be from military veterans who will talk about a rescue mission and their helicopter crashing to somebody from Oregon who hiked all the way to Tennessee. I know so many crazy people who are just really cool. It’ll just be having them come in, sit down and maybe tell me one or two stories or talk how they want to talk from 30 minutes to an hour.”