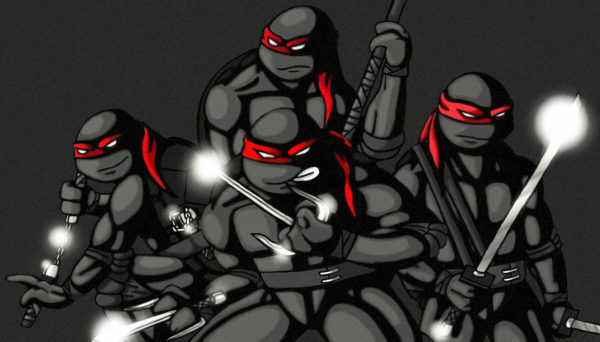 If you’re an 80’s kid then you sure as hell were a fan of the Teenage Mutant Ninja Turtles. In 1987 the hit comic made a transition to television and is still rockin’ in its third variation. The men behind Fusion Fight Gear were obviously 80’s children and have come up with a wicked design for their first TMNT product line.

The rashguard and spats that aren’t limited release, but have been very popular, are based on the original 1984 Eastman and Laird comic book Issue # 1. The top features the Turtles taking on Shredder’s foot clan atop a building in New York City. The Japanese kanji on the right arm means “turtle ninja”. 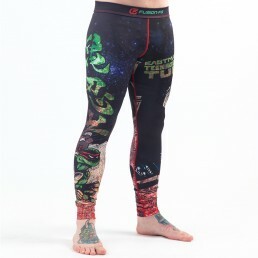 I’ve reviewed a pair of Fusion spats in the last review, and one comment that was made was they rode down in the back. Well, the design on this one is a tad different than the Batman line, but they still dropped a tad and for that, I’d go with a size bigger than you normally do.

The fit on the rashguard is much like every other Fusion product, but the design is second to none. As a giant TMNT fan growing up, this was a must have in my BJJ wardrobe.

The material is a high-end 88% polyester, 12% spandex blend. The spandex content creates more elasticity and results in a more comfortable, contoured fit that hugs your body and makes you tough to grab.

Both the rashguard and the spats retail for $59.99 USD. So if you are like me and can’t resist the turtles in a half shell then head on over to FusionFightGear.com and let them know MMASucka.com sent you.