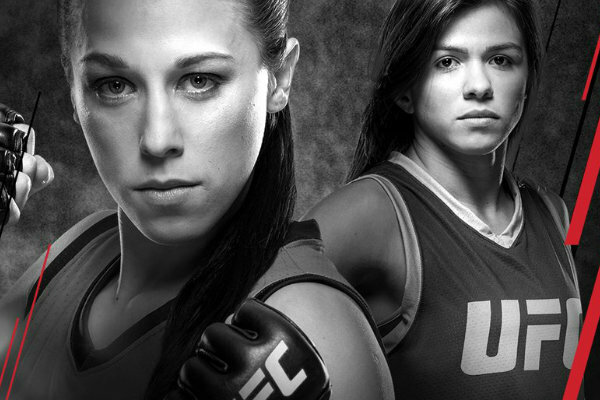 UFC Fight Weekend Part 2 of 3: Breaking down Jedrzejczyk vs. Gadelha 2

The Odd Pair Out

The UFC women’s strawweight division was introduced rather strangely. Foregoing the traditional division-building method of slowly luring top talent away from other organizations, Zuffa LLC opted to absorb many of Invicta FC’s top 115-pound talent and injected them into their reality TV talent farm, The Ultimate Fighter. This time there was a twist: the winner of the show’s finale would immediately be crowned champion of the new division. When all was said and done, incumbent Invicta FC champion Carla Esparza won the belt. But for those paying attention, this crowning felt a little empty.

The reason for this was twofold. First, the show did not include one of the top contenders in the division, Claudia Gadelha, who was awarded a UFC contract in exception to the contest. Second, it was Gadelha and Tina Lahdemaki who were the first two strawwewights to compete in the Octagon, a perplexing choice in debuting a division by a company for whom prestige was historically of paramount importance.

For many, current UFC strawweight champion Joanna Jedrzejczyk wasn’t even a blip on the radar. The six-time world champion and four-time European champion in Muay Thai had also debuted in the UFC before The Ultimate Fighter 20 concluded, but much of the attention was still on Gadelha. Just one day after Esparza became the inaugural strawweight champion, Jedrzejczyk and Gadelha locked horns for the first time. When the dust settled the Polish kickboxer had given the Brazilian grappler her first loss and earned a shot at the newly minted belt. In an embarrassingly lopsided demolition, Jedrzejczyk battered the defending champion en route to a second round TKO. Two successful title defenses later, and Jedrzejczyk is once again facing the opponent who gave her her stiffest test to date, Claudia Gadelha.

Joanna Jedrzejczyk understands the economics of combat – the budget of motion and striking, of risk versus reward. Operating behind a snapping piston of a jab, “Joanna Champion” is stingy with strikes beyond the classically dependable jab, cross and hook trifecta. This adherence to offensive basics open up slightly flashier techniques so that when she does throw something else – leg kicks, uppercuts, front kicks to the body or head – they often land and, depending on their efficacy, she considers lacing them into the tapestry of her evening’s arsenal.

About as busy a striker currently plying their trade in the UFC’s eight-sided cage, Jedrzejczyk affords her opponents zero respite. As long as she leads the dance she sets the pace and hers is one she can keep up for the full 25 minutes of championship fight time. And like a dance, it’s all about rhythm with Jedrzejczyk; she has developed ways to avoid any attempt to disrupt the tempo she’s set. Using subtle lateral movement, the champion can step just outside of the pocket when an opponent steps in with strikes and then return to where she was a millisecond later with strikes of her own. “How dare you try to play another song,” she says. “This is my party; I get to pick the music.”

When Jedrzejczyk is not engaging, she is negating. Among the finest counterpunchers in the UFC, she also possesses counter-grappling so impressive that it’s drawn comparisons to former UFC light heavyweight champion Chuck Liddell. She is deceptively strong in the clinch, wall walks as artfully as anyone competing in the Octagon, concedes no position and always works to improve her posture, return to a her feet and punish her opponent with stinging flurries mean to dissuade further attempts at closing in on her.

The challenger, Claudia Gadelha, is cut from a different cloth. A physical specimen, her entire approach to combat revolves around her incredible strength. An effective fighting style always compliments the physicality of the fighter; the two are inextricable. Jon Jones is gangly, so he fights long and utilizes different ranges to perform to the best of his abilities. By contrast, Daniel Cormier is stout and powerful, so his style focuses on avenues that utilize those restrictive strengths. Gadelha’s is no different. She is an aggressive and powerful striker when she finds success and is willing to get hit a few times to accomplish her goals. Her greatest asset, however, resides in her grappling abilities.

Gadelha dependably throws a one-two combination in nearly half of her exchanges, but the manner in which she does so would give striking traditionalists fits. Her jab comes out nice and crisp, but rather than pull it back quickly, she instead leaves it extended while following it up with her right cross. This is completely deliberate, as it affords her access to her favorite standup technique: the Muay Thai clinch.

From this position Gadelha can tenderize her opponent with knees and elbows and, when opportunities arise, double-leg takedowns and throws. One glance at Gadelha’s physique is quite telling; her core, and specifically her hips, are the source from which all of her offensive tactics sprout. Her ability to pass once she has an opponent horizontal is among the finest in her division and once she gets moving she almost always reaches mount, wherefrom she favors arm bars and vice-like rear-naked chokes.

Despite cutting her combative teeth in Muay Thai, Joanna Jedrzejczyk inexplicably produced little answer for Gadelha’s primary clinch weapon, the Thai plum. In fact, she doesn’t appear to possess an operational offensive clinch at all. Rather, she works behind the aforementioned jab to great effect, not entirely unlike a certain British middleweight champion. However, this methodical predictability leaves her open for counters – crosses, uppercuts, takedowns and a plethora of kicks to the body – that could disrupt her entire methodology.

It’s actually quite remarkable that few of Jedrzejczyk’s opponents have gone after her midsection with any sort of appropriate enthusiasm. Her footwork gives opponents fits in the pocket, but when she chooses to remain and exchange, bending at the waist to evade incoming strikes, she becomes vulnerable to abdominal strikes and takedowns.

Speaking of takedowns, her kicking game also features exploitable imperfections, the most prominent being her tendency to admire her work a little too long, as was the case in her bout against Valerie Latourneau, who caught her dangling leg time and again, scoring takedowns that otherwise would have been unavailable to her. Jedrzejczyk is seemingly allergic to almost every avenue of grappling, meaning she can handle it if it comes her way but she by no means is interested in going there of her own volition. She therefore poses no threat in terms of takedown and, in the off-chance she winds up in an advantageous position on the ground, poses an infinitesimal submission threat.

Gadelha’s greatest kryptonite thus far has been her gas tank. Forced to engage for prolonged periods either at range or in the clinch, she exits visibly tired. As a result, she is forced into a separate kind of economy of movement and her overall game suffers. She offers up scant head movement – a general liability in combat sports – and is noticeably more apprehensive in engaging her opponents’ strengths.

Case in point: In her last fight, against former World Series of Fighting strawweight champion Jessica Aguilar, Gadelha forewent the Thai clinch because she knew that it would place her in optimal range for Aguilar, a deft wrestler, to open up her own offensive game. Without the clinch to sink into, Gadelha’s entire offense suffered. Aguilar, a good but not elite striker, looked great on the feet as a result. Depleted by her opponent’s onslaught, Gadelha’s hands dropped often and she ate far more strikes than she should have.

Like Jedrzejczyk, Gadelha shines brightest when she is leading the dance. But unlike the champion, the challenger has regular trouble counterpunching, which illuminates an unfortunate truth about her overall game: she just doesn’t seem to be an entirely comfortable striker. Even on the ground, on top and in control, she is reticent to throw many strikes unless her positioning is absolutely solid, lest she give up position. To win, she needs to close distance often and bring Jedrzejczyk into her Muay Thai clinch against the cage, attack the champion’s legs with kicks and go to the body as often as possible. The Polish dynamo clearly has the edge in cardio, so it is imperative that Gadelha drain as much wind from her opponent’s lungs as possible.

The top-ranked female fighter in the world, Joanna Jedrzejczyk has a much broader path to victory. She must maintain the same unrelenting pace she did previously while keeping mobile in order to negate Gadelha’s attempts at takedowns and initiating the clinch. The champion has a knack for neutralizing opponents who close distance and force grappling exchanges with her, but she still could benefit from added efforts to maintain range and use her superior footwork to avoid disadvantageous, close-quarter combat altogether.

There is very little chance of Jedrzejczyk losing by knockout and equally as slim odds that Gadelha will be forced by her opponent to tap. The champion is not a one-and-done knockout puncher, but her attritive, eroding pugilism can indeed do enough damage to secure striking-related stoppages. Likely the more powerful of the two, blow for blow, Gadelha certainly could get the job done by strikes, but short of a lucky punch, if a knockout comes it’ll do so as a result of her nasty clinch work. If this contest goes the distance, however — as was the case in their last encounter — Jedrzejczyk’s superior cardio, championship experience and ability to control distance should enable her to capture more rounds than the challenger.