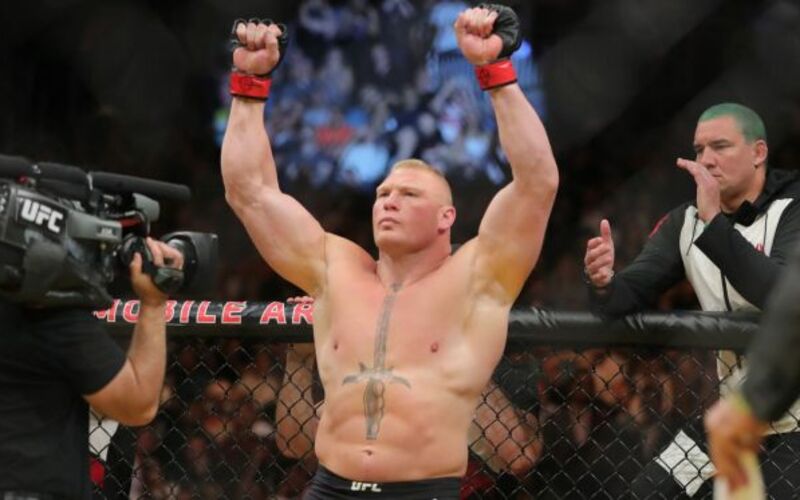 Considering all that went into it – ten months of buildup, a week of events in Vegas, two lead-in fight cards, and a legitimately stacked card from top to bottom – UFC 200 should have felt big and different. It didn’t.

It’s not that the UFC didn’t try. They replaced the usual blue-gray canvas with canary yellow (or “gold,” if you want to buy the company line). Instead of adding gravitas, the canary yellow was a strange distraction, and made the event feel like a King of the Cage or Cage Warriors event for long-time fans. The UFC also beamed prefight hype videos onto drapes lowered to surround the Octagon, which got zero reaction and looked second-rate. Despite swinging and missing on both ideas, one can at least credit the UFC for doing something different.

The problem is that was all they did. The rest of the show’s production was UFC boilerplate: the same format, the same camera angles, the same staging. No live music. No national anthems. No ramps or gaudy entranceways or pyrotechnics. “Face the Pain” continued, though.

For the casual fan or curious onlooker, the pay-per-view fights likely didn’t live up to the event’s billing. Aldo-Edgar was a smart, tactical affair; Mark Hunt did little in between Brock Lesnar takedowns; and Daniel Cormier did what he had to do to shut down Anderson Silva. But like Dana White’s common refrain about fighters leaving it to the judges, the promoter can’t leave it in the hands of the fighters. What should have felt like the culmination of a week of events, of ten months of build, of, perhaps, Zuffa’s ownership run, instead felt like any other UFC pay-per-view event.

It didn’t help the UFC that Jon Jones got himself pulled off the show. Brock Lesnar had already stolen the show at the pre-fight press conference, and without Jones-Cormier 2, he became the sole individual draw of the show. But after initially putting him and Mark Hunt in the main event, they made the switch to Miesha Tate and Amanda Nunes. Tate is a bigger star than she’s often perceived, but her fighting Amanda Nunes – a name no one outside the fight community knows – does little to capture the imagination.With a Jones-Cormier grudge match or the crazy special attraction of Lesnar, the card builds towards a big payoff ending. With Tate and Nunes, the show didn’t build to anything at all.

Nunes did become the first openly gay champion in UFC history, which is both notable on its own and for the fact that the UFC seemed to make zero mention of it at any point. There’s no mention on the UFC’s official Twitter account, and I don’t remember anything on the broadcast either before, during, or after the fight. Nunes’ girlfriend was featured in an Embedded episode, which was great because they presented their relationship like any other.

But the first openly gay champ is big deal and something worth pointing out! And ignoring it is especially bizarre considering the promotion started selling “We Are All Fighters” shirts with proceeds going to a LGBTQ center in Las Vegas. I don’t think the UFC was trying to whitewash the moment – the two examples above are an indication of how far the company has come on these issues – but perhaps it got lost in the shuffle of a gargantuan event?

Brock Lesnar already “won” after the first round of his fight with Mark Hunt. He came in and won a round against a legitimate UFC competitor after nearly five years away from the sport. Then he decided to rally after a bad second round to win the damn fight outright.

Lesnar’s accomplishments in the sport cannot be understated. He benefited from good timing with regards to winning the UFC title, but here’s the list of men Lesnar has defeated in the UFC: Heath Herring, Randy Couture, Frank Mir, Shane Carwin, Mark Hunt. Ranked heavyweights, every one of them.

Daniel Cormier just couldn’t win this week. He loses the Jon Jones fight (and maybe forever) and then gets booed for doing what he needs to do to beat Anderson Silva. Cormier got put into a classic no-win situation. He decided to handle that by taking Silva down and working on top for most of the fight. The problem was compounded because Silva is very savvy defensively. One of the understated things about combat sports is how hard it can be to accomplish something if your opponent is solely concerned with preventing it. Silva’s lockdown half-guard and posture control minimized the damage he took, but also gave him little opportunity to try and escape back to his feet. And without those scrambles creating openings, there was only so much Cormier could do offensively. Hence, the fight we saw (and one we should probably be thankful didn’t turn into MMA’s Ali-Holmes).

Gauging by some of the scorecards on Twitter, it looked like we might have another philosophical judging debate on our hands on the merits of damage vs. volume. Fortunately, though, all three judges and all 22 media members collected by MMA Decisions found some permutation for Aldo.

-Cain Velasquez bounced back from his title loss to Fabricio Werdum with a win over Travis Browne. While Velasquez will likely fight the winner of Miocic-Overeem and while he may still be the best heavyweight on the planet, the injuries and time off may have robbed us of his potential.

-Sage Northcutt has plenty of raw tools and athleticism, but he was dangerously close to losing to some guy named Enrique Martin. Unless the UFC is willing to continue to dig up dregs for him, his development would be better spent on the regional scene.

-It’s still a hideous design, but colored Reebok fight gear is a huge improvement over the monochromatic look.