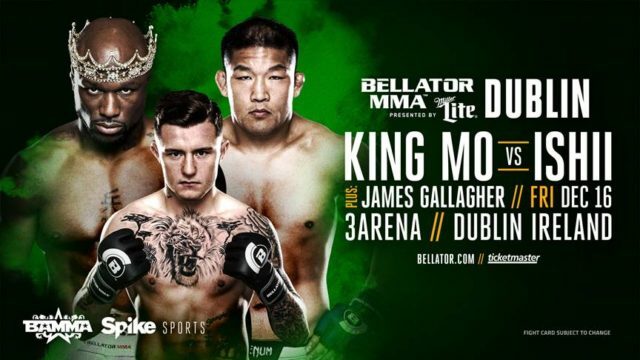 ‘Bellator 169: King Mo vs. Ishii’ has been announced for December 16 at the 3Arena in Dublin, Ireland. The event will be co-promoted with BAMMA 27 that same day, live from the same arena prior to Bellator 169.

In the main event, “King Mo” (19-5, 1NC) will look to rebound from a unanimous decision loss to future light heavyweight title-challenger; Phil Davis. He will take on Japanese Olympian, and gold medalist judoka, Satoshi Ishii (14-6-1). Ishii enters the fight after suffering back-to-back losses. He was knocked out by Jiří Procházka under the Rizin banner prior to losing a razor-thin split decision to UFC, Pride, and Bellator veteran; Quinton Jackson.

Also on the card; former featherweight title challenger Daniel Weichel (37-9) takes on Dublin’s own Paul Redmond (11-6). Since suffering a KO loss to Patricio Pitbull in their title bout in 2015, Daniel Weichel has won two-straight, picking up unanimous decision victories over Emmanuel Sanchez and Giorgi Karakhanyan. Paul Redmond will be making his Bellator MMA debut when he takes on Germany’s Weichel. Since getting released from the UFC last year, Redmond has picked up one win outside of the promotion. We most recent saw him beating Chris Stringer under the BAMMA banner.

One of Ireland’s brightest prospects will be on this card as well, in the form of featherweight James Gallagher (4-0).

The BAMMA portion of the card will be headlined by a bantamweight title fight between Tom Duquesnoy (13-1, 1 NC) and Alan Philpott (16-8). Also, a featherweight title fight featuring former Bellator fighters Ronnie Mann (25-8-1) and Martin Stapleton (18-4).