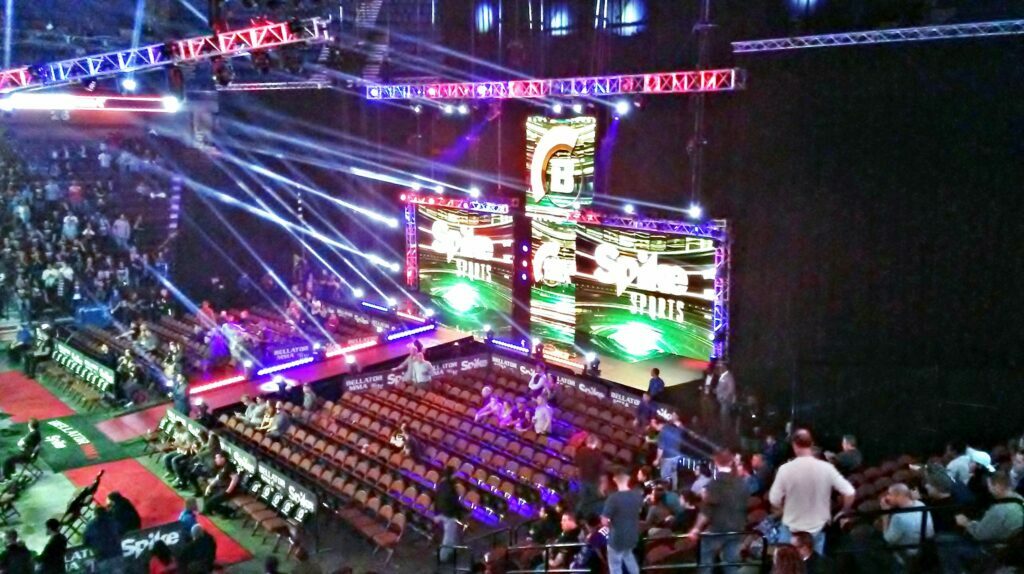 On November 4, Bellator brought their traveling carnival of MMA into the Mohegan Sun Arena, in Uncasville, CT. It was a night where my fledgling journalistic journey would be embraced (for the first time) by big-league mixed martial arts. And the likes of Phil Davis, Liam McGeary and a host of other talents would make it a night to remember for the devotees in attendance.

Friday night was my first foray into being a credentialed press member for a major MMA show. So my excitement was palpable. It was subdued though, as I admired the massive splendor of the Mohegan Sun casino. Its impressive looking and mirrors any notable casino in the country—including that smell of cigarettes and senior citizen perfume wafting over from the slot machines.

After a lengthy walk to the arena, and a stop at the box office to get my press pass, I made my way to press row. I have to say, as a youngling in this game (and a long-time fan) there are few things more cool than asking, “Excuse me, which way is press row?” This is only topped by reaching your seat, seeing your name on the table, and having the fellow sitting behind you get a bit booty-hurt over someone they don’t recognize having a better seat than them. It’s cause for an inner fist pump moment.

Some knock the spectacle of a “tent-pole” Bellator show because it isn’t like the UFC. I for one have never subscribed to that thinking. I love it, and in person its even better. The lights, the music (with base that thuds through your chest), and the grandiose stage give you a side of glamour with your serving of fisticuffs.

It’s the right kind of presentation to pair up with a Scott Coker promoted event. Ever since his days as the head of Strikeforce, Coker can always be expected to give exciting finishes, trash talking vets, and blue-chip prospects on the rise. All of those elements were on display Friday night.

These prelims were special because two of the newly dubbed “Fab Five” made their MMA and promotional debuts. Ed Ruth and Tyrell Fortune–along with Aaron Pico, Jarod Trice and Joey Davis—are part of a quintet of elite collegiate wrestlers signed by the promotion. The hope is that they will be the foundation of the company for years to come. And for a man that found, and nurtured, MMA superstars like Daniel Cormier, Tyron Woodley and Ronda Rousey, we should take Coker’s word for it, and keep an eye on them.

Each man faced another fighter debuting professionally. Both men won their debuts. And both won by technical knockout in the opening frame. They were also both in attendance at the post-fight press conference, showing Bellator’s high hopes for the pair.

However, their success differed. Ruth was up first and found that MMA can be a bit dicey, as he was stunned, and put on his butt, early in the round. Ruth would mention at the post-fight press conference he heard a ringing in his ears and thought, “he’s still right there, and there’s not two of them, so I’m going to attack that guy.” And that’s exactly what he did. He used his national championship winning wrestling and took the fight to where he was comfortable. Though he did not beat his opponent—Dustin Collins-Miles—into submission, referee Kevin MacDonald mercifully ended the bout, handing Ruth a major step forward in a promising career.

Both looked like fighters in their pro debut (which is not a bad thing), though Fortune showed more dominance over his opponent. After taking an early jab from his opponent, Fortune thought to himself, “Ok, this is a fight. This isn’t a wrestling match anymore.” The Blackzilians team member—who didn’t feel much nervous energy leading up to the fight—also would use his stellar wrestling acumen to take control of the fight. However, when on the mat, he showed a natural talent for vicious ground and pound. He landed several knees to the body of Cody Miskell that made my ribs ache, and the crowd voice a unified “Oh.”

Many in the audience did not seem fully aware of the importance of the pairs first entrance into an MMA cage. Nonetheless, both have the pedigree to make those who understood the significance appreciate the possible history they witnessed–prospective future stars making their debuts.

Along with Ruth and Fortune showcasing their talents on the undercard, the prelims were full of talents from Connecticut and surrounding states. Josh Diekman, Tim Caron, and Sarah Payant all had obvious cheering sections bring an extra intensity to the bouts. Not all of them would give their loved ones reason to scream in victorious joy. But the experience of living out a life journey close to home, and in front of the people most supportive of them, was a special moment that is hard not to be touched by. Especially the agony of defeat.

Soon after, the Bellator production went into over-drive. The lights went down. The music went up. And Michael C. Williams’ smooth baritone voice boomed over the address system, as he implored the crowd to show their excitement for the beginning of the broadcast. The celebrities mulling around (which included WWE announcer Corey Graves, Boston Celtics center Jonas Jerebko, former San Diego Charger Shawne Merriman, and MMA legend Royce Gracie) took totheir front-row seats. It was showtime.

Without a doubt the prelim fighters don’t get the same effects as the main card combatants. It gives the viewer the belief these fights are more meaningful and bigger. And it was two big men that lead the main card and gave it a whole bunch of meaning.

MMA veteran Sergei Kharitonov made his anticipated debut for the company. As a -375 favorite to beat his younger opponent, this seemed like a predetermined fight. Javy Ayala was not interested in those odds. Early in the first round the fighter from Porterville, CA landed an overhand that left the Russian unconscious, before he even hit the floor. It made fans jump out of their chairs in shock. It was a result that made the reporters at press row look at each other in stunned disbelief. The televised portion of the show just opened with a bang.

To my dismay, two fights that included Paul Daley, Derek Anderson and Marloes Coenen were scrapped from the main card in the final 24-hours leading up to the show. This turn of events would catapult the latest champion of Gracie Jiu Jitsu in MMA—Neiman Gracie—on to the main card.

This family of fighters all fight in a similar way. An uncomfortable aura comes off of them when standing and attempting to strike. It is all a predator in wait strategy for that one moment they can get it to the floor, and end it. This match followed that Gracie template to a tee. His opponen–Rudy Bear–is a capable veteran. But he was still no match for this vaunted family art. Gracie got a first round armbar submission. Via of a very slick transition from back control.

“My uncles are happy with me because I used Gracie Jiu Jitsu,” said Gracie. Though, he understands that in today’s modern era of the sport that isn’t enough. “I’m trying to become more of a complete fighter,” he said. Gracie doesn’t want the moniker of being just a “jiu jitsu guy.” With his record moving to 5-0, and time on his side at 27-years-old, the young grappler has time to complete his skill-set, and notch many more wins.

The co-main even between Brennan Ward and Saad Awad was easily the fight of the night. Because of its intensity in and out of the cage. Ward, who hails from New London, CT (just a short drive from the Mohegan Sun), had the largest crowd reception by far. Several friends were seated in front of press row rooting him on (as well as standing up in our field of view). One of those friends included the aforementioned Daley.

The fight did not last long, but the cheers for the hometown brawler added a component that is hard to match from a couch seat at home. After some brief exchanges, the pair grappled against the cage. At which point, Ward claims Awad asked him, “You want to wrestle or you want to bang?” Ward’s line-of-the-night response was, of course, “I want to bang baby.” The chat would lead to a furious exchange between the two soon after. The end result would leave Awad tumbling to the floor out-cold, and the crowd being left in a frenzied state.

Now the 10,000 seat arena was not filled to capacity. And there were a fair amount of seats available in the highest sections. But you wouldn’t have known it from the ovation for Ward. This is the seventh time he has fought in Uncasville for the company. It was his return fight following a surprise loss to “Cyborg” Santos in April. He had much to make up for. He did that by moving his record to 5-2 when fighting in his own backyard.

Because of the sudden end to all of the main card fights, there was an unfortunate amount of sitting and waiting. While at home you may get the opportunity to see a fresh prelim fight, in the arena it is far less interesting because you saw it already. However, Phil Davis versus light heavyweight champion Liam McGeary was a fight many had waited much longer for.

Both entrances garnered noteworthy applause. McGeary has made New York his “from” location in his introduction. So I’m sure the event being close to his new home had an effect on his louder support. There was a clear energy and excitement in the building once the bout started. Though that diminished noticeably as the crowd slowly realized Davis’ wrestling would be too much for the champ. “He beat me on my bad day, and he was on his good day,” said McGeary after the fight. He openly lamented the affects a long lay-off might have had on his performance. He had not fought in over a year heading into the bout.

As Davis made the fight less interesting with his stifling grappling, the totally drunk fans behind press row kept themselves entertained with the kind of chants only an alcohol filled boneheads could truly appreciate. While he didn’t seem to grab the attention of those men, his performance was what many expected, and it was impressive nonetheless.

One the main event had ended, and all the press conference questions were answered, the night was officially over. A new champion was crowned. The locals were happy after their favorite fighter was victorious. A few rising talents continued, or started, their journey in this unique sport. Bellator put on an entertaining, and finished filled, show. And a young journalist got his first taste of big-time MMA spectacle.