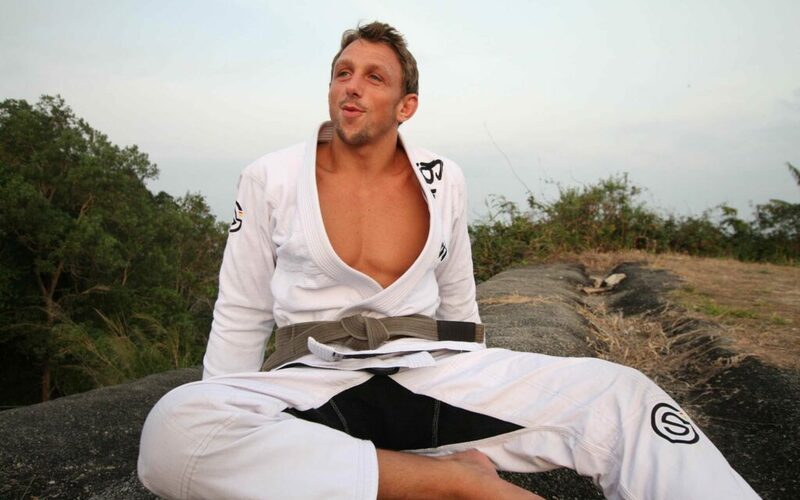 When you hear the name Stuart Cooper, as a Brazilian Jiu-Jitsu fan you for surely know that he produces and films some of the greatest documentaries online. Earlier this month it was announced that Cooper would be uprooting himself from his hometown of Preston, England, and making the move to Singapore to train and coach with Evolve MMA.

The world class gym was founded by one of the greatest names in the Muay Thai world — Chatri Sityodtong. He has built the team up to have so many different facets to it and has implemented some of the best coaches in the world. Stuart Cooper will be stepping into those doors and sharing the mats with legends.

“I’ve been traveling for almost ​six​ years​, ​producing videos with some of the best athletes in the world and developing my own BJJ skills,” Cooper told MMASucka.com. “But the time had come where I really wanted to find somewhere to focus​ on​ full​-​time and continue producing ​martial arts videos and develop my own BJJ skills as a coach.​ ​I had heard through a friend in the industry that Evolve ​MMA ​was hiring so i immediately contacted them about any possible work making videos and teaching BJJ in one of the most beautiful countries in the world.”

With his film-making, Cooper has traveled the globe to many different countries and different cities. Something that keeps him occupied while not filming the arts, is training and coaching in the arts.

He spent some time in Thailand coaching BJJ at Tiger Muay Thai and found that the coaching aspect helped round out and improve his game. And the positive feedback from people didn’t hurt either.

“I first had experience covering a few classes in the UK when ​I ​was ​still ​a purple belt<” said Cooper. “Then​, I ​moved out to Thailand to work and train at Tiger Muay Thai. After about ​six ​months at TMT​, ​the opportunity came up to start teaching the evening BJJ class. I really enjoyed teaching and received ​positive ​feedback from the students. I also found that it improved my own BJJ game. Since then​,​ it has been my biggest passion besides ​film-making, and I have conducted seminars all over Poland, UK and America​.​”

Many people train at Evolve MMA as mentioned above. But others make the trip to Singapore just to have a chance to see what the gym is all about. A lot of fighters come and go, but one thing is for certain, Evolve is honing champions. According to the Evolve website, they are home to the most world champions of anywhere in the world.

Seeing all of those different accolades makes the gym stand out. that’s for certain, but what was it that particularly stood out for Cooper to choose to make the move to Asia?

“Evolve​ MMA​ is very different​, ​because of the huge lineup of world class coaches in each discipline,” he said. “I have trained at many academies around the world​, ​but ​I ​have never seen so much talent under one roof. For example​,​ most gyms ​I h​ave been to ​focus on either Gi or No-Gi BJJ. ​Evolve MMA has classes​ for both, as well as 10th Planet Black​ with​ Belt Rick Marshall. This is a completely different style of ​Jiu-Jitsu, and I am really looking forward to learning​ it​ myself. They also have ​World Champions training there​, like Angela Lee, Michelle Nicolini, Roger Gracie, Orono Wor Petchpun, Petchboonchu FA Group, Sam-A Gaiyanghadao, and so many more. Throughout the year​, Evolve also ​hosts seminars with big names​, ​​​such as Miesha Tate and Garry Tonon​. That’s very exciting, and I can’t wait to be part of that organization.”

When thinking about Evolve, who is the BJJ guy that comes to mind? For myself it’s Shinya Aoki.

I would say Shinya Aoki and Rafel dos Anjos, I first heard of Evolve​ MMA​ in 201​1, w​hen ​I ​was a purple belt training in Rio ​d​e Janeiro. At that tim​e, I was training with RDA for one of his upcoming fights and ​I ​remember him leaving for Singapore to work on his striking and finish off his training camp. So whenever ​I ​think of Evolve​,​ it reminds me of training with RDA.

Have you done any documentaries about the crazy team that is Evolve​ MMA​?

No​, I never had the chance to work with any of the Evolve​ Fight Team, ​aside from Rafael dos Anjos. I had the opportunity to film ​RDA’s training​ ahead of​ his UFC fight against Gleison Tibau​, ​and made ​three ​short videos on his preparation. They were actually some of the first videos ​I​ had ever made back in 2011.

If not, will that be something that comes up on the docket in the future?

Definitely, that is something that i am really looking forward to. There are so many big names to produce really nice video content on at Evolve. Once i arrive in March I will start to make videos with Shinya Aoki, Ben Askren, Michelle Nicolini and many of the other famous athletes that pass through conducting seminars.

I have to ask from a complete selfish fan perspective — does training and teaching at Evolve mean that your documentaries and films will be taking a bit of a backseat?

No, ​not at all. In fact​, I ​will be producing more films than ​I​ usually do because of the huge lineup of ​World C​​hampions ​and instructors​at Evolve​ MMA. I’m ​sure they all have really interesting stories that will make great videos for me to produce. 2017 will be a very busy year for me.

Talk a little bit about your past. Who did you get your black belt from?

I received my ​black belt from my professor Lucio Sergio Dos Santos in 2015 at the age of 31. It took me ​eight​ years to get my ​b​lack ​b​elt. It has been a great journey​, ​and because of BJJ​,​ ​I​ ​had opportunities to travel all over the world and train with the very best. I’ve been fortunate to train at the best academies in Rio, Recife, Miami, Florida, New York, L​os Angeles​, San Diego, Oregon, Texas, Thailand, China, Australia, Dubai and Jordan. I​’v​​e also had the chance to train with many ​world-class black belts and MMA fighters​,​ such as Marcelo Garcia, Fernando Maccachero, Mario Sperry, Murilo Bustamante, Otavio Souza, Braulio Estima, Roger Huerta, Brian Ebersole, Osvaldo Alves, Roberto Cyborg Abreu, Eddie ​B​ravo and many more. The list goes on. I​’​m very lucky to have had the pleasure to train with all of these amazing athletes.

What go you interested in BJJ in the first place?

I started training BJJ ​when I was ​23​, ​​​​right after seeing UFC for the first time. I remember wanting to try it right away and looked up Muay Thai classes in the area. I took my first Muay T​h​ai class ​before seeing​ that they had BJJ on right after. I remember getting choked out by people much smaller than myself and ​I​ immediately got hooked. Since then​, I ​have been training every day and it has now become my life.

I’ve heard in an interview in the past that you plan on transitioning from BJJ to MMA. We see so many people from the BJJ scene make this jump. What was the mindset behind doing this?

Yes​, I ​have wanted to fight MMA for a long time now​, ​but the timing was never right. I always knew that if ​I​ was going to do MMA​, I​ would do it right and with all of my ​focus. Over the last few years​, I ​was traveling way too much and was mainly focusing on my films and BJJ.​ ​However​, ​back in 2010​, ​when ​I ​was a blue belt residing in the UK full​-​time​,​ ​I​ did train very hard for ​two​ amateur fights. I won both very quickly in the first round. Once ​I​ relocate to Singapore and start to train full​-​time at Evolve​ MMA,​ ​I will be able to put ​in ​the time​ ​and train properly for my ​professional MMA debut.

Do you have a goal for your MMA career?

I want to do MMA because it​’​s something ​I​ love​, ​and ​I believe ​that I h​ave the right style of BJJ for​ it. ​Competing in MMA will also improve my overall knowledge as a coach​, ​and ​I​ will have much more of an understanding of what BJJ techniques work well in an MMA fight. This will enable me to help upcoming MMA fighters in the future.

Please don’t have the Jorge Gurgel syndrome, where your BJJ goes out the window. I know so many BJJ practitioners that that has happened to, including Demian Maia. However once he found that it didn’t work for him, he went back to his bread and butter. Why do you feel guys that are so good at one aspect of the game try to do something completely unknown to them?

I think sometimes when BJJ practitioners transition over to MMA they have to devote a lot of time to developing their striking and put BJJ ​to the wayside for a while. When it comes to the fight​, I t​hink maybe they want to show the improvements of their striking and show that they are not one​-​dimensional. ​It could also be because of the lack of wrestling they have. I know so many high​-​level BJJ practitioners fighting MMA​, ​but they don’t really have the effective takedowns to go with their BJJ​, ​and then find themselves standing up against their opponent.​ It’s​ trying to find the right time to set up the takedowns with your strikes. One person that does it really well is Jacare Souza and​, ​of course​,​ Damien Maia.

With you being based in Singapore at Evolve, will you still be globetrotting to other gyms for your films? Or do you plan on sticking in Asia for the next little bit?

​I ​plan to stay in Asia for a long time and really focus on my new career with Evolve​ MMA​. ​It’s now time to stay put and focus on my future.