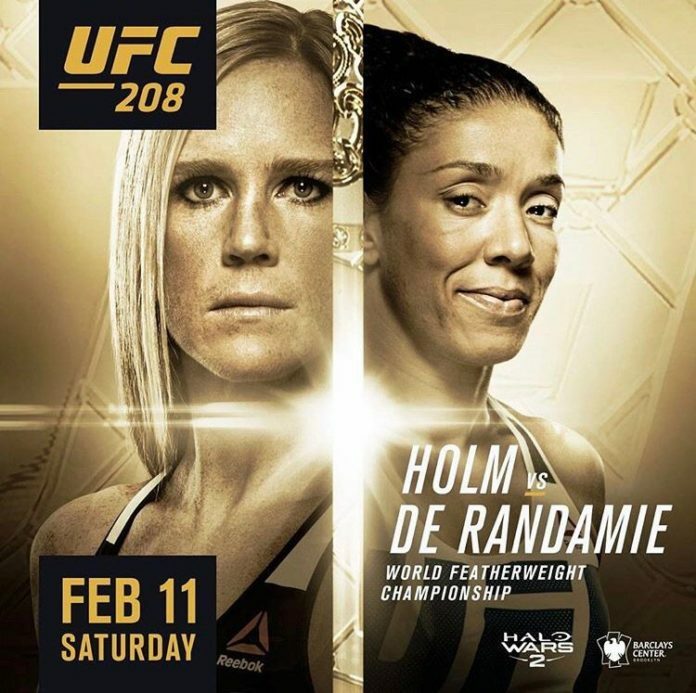 The UFC returns to pay-per-view this weekend, with UFC 208 going down at the Barclays Center in Brooklyn, NY. That means it’s time to help the fighters with lackluster, over-used, and just plain bad walkout music. This week, I’m teaming up with Two Wheel Union host and fellow MMASucka.com scribe John Douglas to lend aid to these wayward warriors. So, without further ado, here we go.

What she walked out to last: “The Landlord’s Walk” – Blair Douglas

What Justin thinks she should walk out to next: “Preacher’s Daughter” – 3 Inches of Blood

What John thinks she should walk out to next: “For Keeps” – Gossip

Justin: In all honestly, I feel like Holly Holm is missing out here. “The Landlord’s Walk” is kind of an energy-drainer when it hits. It’s not a bad song, it’s just not one that UFC crowds can really connect with on a mass scale. More folky and classical songs can work for some, Yoshihiro Akiyama for example, but this one just doesn’t seem to fit. Hence, I propose going with the somewhat obvious “Preacher’s Daughter” by 3 Inches of Blood, full of hard rocking, traditional metal swagger. It even boasts a pair of fantastic bridges imploring the listener to, “Beware the Preacher’s Daughter.” Listen below.

John: Holly Holm is coming off of two losses in a row. The first losing her Bantamweight strap and most recently dropping a heartbreaking Unanimous Decision loss to Valentina Shevchenko. Going into the fight against the Dutch Kickboxer Germaine de Randamie for the inaugural Women’s Featherweight Title. Holly will have to change things up if she wants to be the first woman to be a two weight division champion; she’ll have to play for keeps. Listen below.

What he walked out to last: “My Time” – Fabolous

What Justin thinks he should walk out to next: “Choke” – Sepultura

What John thinks he should walk out to next: “Hard In Da Paint” – Waka Flocka Flame

Justin: Walking out to Fabolous is a lot like doing the pee-pee dance: No matter how big or how strong you are, you can not look intimidating when you do it. “Jacare“ is a bad, bad man. He should walk out to a song that conveys that. “Choke,” by his Brazilian compatriots in Sepultura definitely conveys that badassness. Listen below.

John: This song is dangerous when put into the wrong hands. This is the kind of beat that turns sparring sessions into street fights, turns men into fighters, and makes listeners put on an ice grill. When those horns come in, it’s time to get ready for a fight to go down. Venom himself couldn’t have captured a more aggressive or ruthless beat. Which will get us ready for what we are about to see; Jacare giving Tim Boetsch a one sided thrashing. Listen below.

What he walked out to last: “Requiem for a Dream” – Lux Aeterna

What Justin thinks he should walk out to next: “Progenies of the Great Apocalypse” – Dimmu Borgir

What John thinks he should walk out to next: “Jump on Stage” – Girl Talk

Justin: Ryan Laflare is not unique in walking out to “Requiem for a Dream.” It’s an easy song for somebody looking for something symphonic and bombastic to walk out to. Laflare should dig a little deeper, and go with the sweeping “Progenies of the Great Apocalypse” from Norwegian symphonic black metallists Dimmu Borgir. It’s a song that many composers would kill to have done themselves, especially those in the film industry. Listen below.

John: Girl Talk takes takes a bunch of instantly recognizable hooks and lyrics and brings them together in this catchy, genre blending mash up. However talented he may be, Ryan LaFlare has developed a reputation for being a decision machine in his UFC career. Having this as his walk out music at the very least will give the crowd something to get excited about going into his fight with BJJ specialist Roan Carneiro. Listen below.

What he walked out to last: “Aleja Gwiazd” by Zdzislawa Sosnicka

What Justin thinks he should walk out to next: “Against Widows” – Amorphis

What John thinks he should walk out to next: “Egoist Hedonist” – Riverside

Justin: I get that fine people of Poland are very proud of their musicians. I can appreciate that. While I can appreciate what many Poles walk out to, from the gangsta to the bizarre, sometimes they can go off the rails. The plodding, Europe-lite stylings of Zdislawa Sosnicka may get a subset of the Polish populace going, it’s too odd to really get over with worldwide audiences. So, in the vein of sticking with something prog, I suggest Marcin Tybura switch it up to the energetic strains of Amorphis’ “Against Widows.” Listen below.

John: Nothing says “Polish Regional MMA” quite like some epic progressive rock! Listen below.

Keep it locked to MMASucka.com for more on UFC 208!