The upcoming UFC 208: Holm vs. de Randamie card introduces a brand new UFC title when Holly Holm faces Germaine de Randamie for the inaugural UFC Women’s Featherweight Championship. We begin this episode by previewing all of the fights on that card including the most under the radar Anderson Silva fight in the last decade, against Derek Brunson.

In the second half of the show we discuss last weekend’s UFC Fight Night: Bermudez vs. Korean Zombie event, as well as the long list of recently released and currently unsigned fighters on the UFC roster.

BROOKLYN, NY – FEBRUARY 08: (L-R) Holly Holm and Germaine de Randamie of The Netherlands face off during the UFC 208 Ultimate Media Day at the Barclays Center on February 8, 2017 in Brooklyn, New York. (Photo by Jeff Bottari/Zuffa LLC/Zuffa LLC via Getty Images) 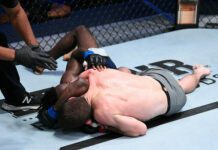