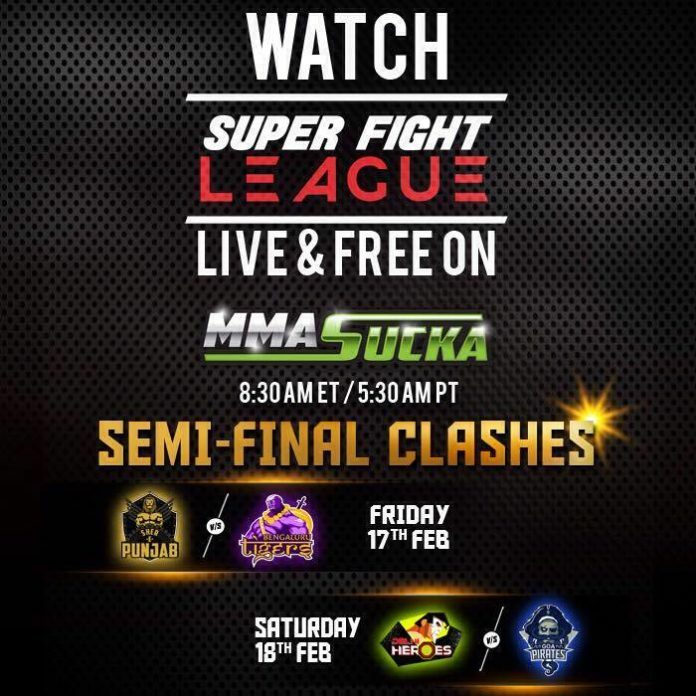 Over the past four weeks Super Fight League (SFL) in India have been hosting action packed bouts of Mixed Martial Arts action in an innovative new team format.
SFL has implemented a distinctive point scoring system unlike any other in the sport of MMA. Each Super Fight League Team is made up of six professional fighters, five male and one female, across six different weight classes including Bantamweight, Featherweight, Lightweight, Welterweight, Light Heavyweight, and Women’s Flyweight. The bouts are scored on a unique point system.
Fights ending in a Draw award +1 point to each team with fights ending via decision awarding +3 points to the winning team. Fights that end via TKO are worth +4, Submission victories are worth +5 and Knockout victories are worth +6.
The Super Fight League was founded in India in 2012 by British Business magnate Mr. Bill Dosanjh and has hosted events both in India and the United States featuring hundreds of fighters from around the world participating in over 60 events to date. Mr. Dosanjh had the following to say ahead of the SFL Season 1 Semi-Finals, ““The inaugural season of Super Fight League has witnessed an array of celebrities supporting the league, while the team owners cheered their fighters in the first season of the Mixed Martial Arts league. I have seen the crowd going crazy while watching the fights and passionately supported the fighters to perform even better every fight night. The turnout at Siri Fort Sports Complex has been amazing and I can assure that we have a great final two weeks in store .”
Super Fight League fans can watch the action unfold here on MMASucka.com via broadcast streams on YouTube and Facebook Live. Friday’s event features a North vs. South battle between Sher-e Punjab taking on Tiger Shroff’s Bengaluru Tigers beginning at 8:30 AM ET / 5:30 AM PT.