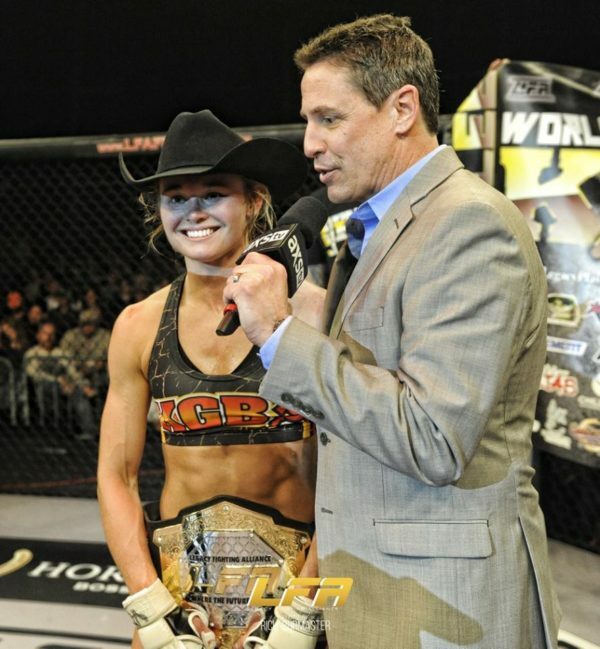 The month of February 2017 featured some pretty great submission wins. We all saw some of the best BJJ in the sport of MMA fully displayed at UFC 208 when Ronaldo Souza took out Tim Boetsch with a kimura. What about James Vick strangling Abel Trujillo with a d’arce choke at UFC Houston? Or Sara McMann imposing her will and running through Gina Mazany to score a quick submission?

Those are the ones we all saw, but there were plenty of amazing submission finishes on the smaller cards this month as well! From ROAD FC to SFL, and even Tanko FC. There was a pretty large list of potential ‘Submission of the Month’ candidates. One fight really stood out, though.

On February 17 at LFA 4, Andrea “KGB” Lee took on Heather Bassett in a fight that was to crown an inaugural LFA women’s flyweight champion.

LFA 4 took place in Bossier City, Lousiana and it featured an inaugural women’s flyweight title fight in the co-main event.

28-year-old Andrea Lee is primarily known for her incredible muay-thai technique, and that was very much on display in this bout. The Invicta FC veteran battered Heather Bassett, both on the feet and on the ground, for two and a half rounds.

The fight was not even close and Andrea Lee looked phenomenal throughout. She entered the contest with two knockouts, two submissions, and one decision win on her resume. At 3:40 of Round 3, before the contest could enter the championship rounds, Andrea Lee beautifully transitioned to a nasty armbar and forced a very much defeated Heather Bassett to tap out.

This was the third armbar win for Andrea Lee, meaning all of her submission wins are via armbar. Check out full event highlights from LFA 4 below, including Lee picking up LFA gold with a beautiful armbar.

Some pretty great submissions this month, so check out a list of honorable mentions below!