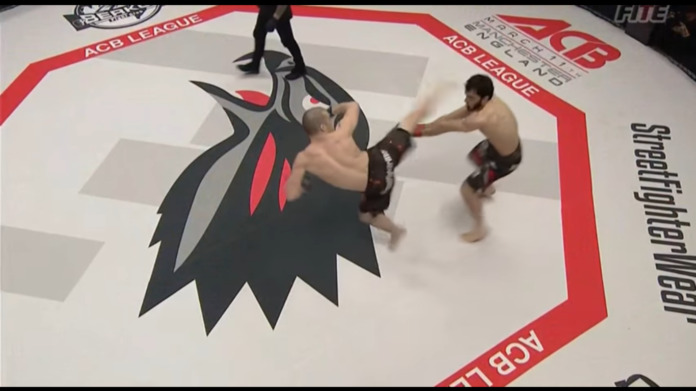 Picking the best knockout of February was no easy task. It seemed like every event that happened had a more brutal knockout than the last.

The amount of highlight reel-worthy knockouts was astounding, but picking ‘the best’ of the month was incredibly difficult. The month opened up with UFC Houston, an event that had four contenders for that title. So right away we should have known the type of month we were about to get!

The Korean Zombie, Khalil Rountree, Thanh Le, Derrick Lewis, Thiago Santos, Patricky Pitbull, and Vitaly Minakov are just a few of the names who added KO’s to their highlight reel this month!

But after analyzing a long list of knockouts, one that took place under the ACB banner really stood out.

The fight lasted less than two minutes, but after about 90 seconds of a ‘feeling out process’, Shestakov threw a picture-perfect spinning back-kick that connected right on the temple of Arsakhanov. Knocking the previously undefeated Russian out before he even hit the mat.

The already devastating knockout was made even more brutal after an unconscious Arsakhanov hit the mat with his arms stiffened up.

Check out the entire fight below, and revel in the incredible finish courtesy of 23-year-old Dmitriy Shestakov.

In case you, for some reason, doubted how tough picking a ‘winner’ this month was; check out the lengthy list of honorable mentions below!