What a UFC Women’s Flyweight Division Could Look Like 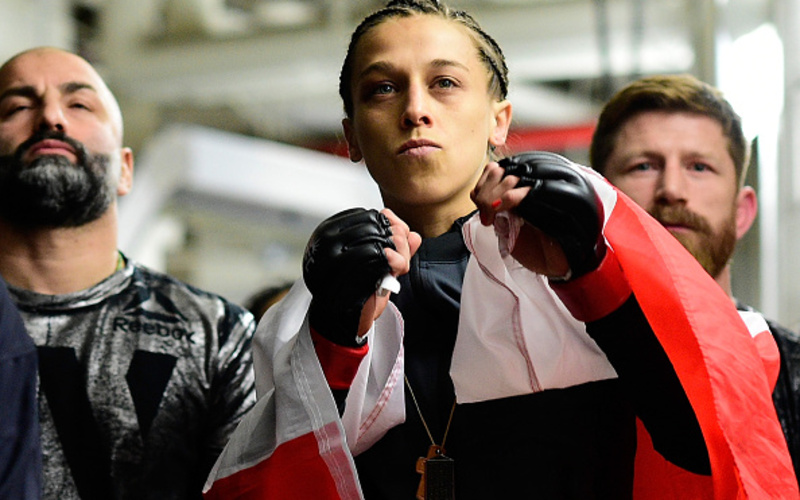 With the UFC recently creating its third women’s division, featherweight, fighters and fans alike have been clamoring for the fourth: flyweight. UFC President Dana White has already poured cold water on the idea, at least for the foreseeable future. UFC fans got their first taste of women’s flyweight back in June at UFC Ottawa, when Joanne Calderwood defeated Valerie Letourneau in an exciting striking match. Since then, the movement for women’s flyweight has only intensified, especially after the UFC decided to create women’s featherweight first.

There are endless possibilities for how a UFC women’s flyweight division would look should the promotion go that route. Smaller women from bantamweight could move down, larger women from strawweight could move up, and it would open a potential free agency splurge for natural 125’ers. Without further ado, here’s how a potential UFC women’s flyweight division could look.

The Brazilian jiu-jitsu ace has her heart set on making the UFC, but has ran into some weight-cutting issues at strawweight. She’s off to a 3-0 start in her professional MMA career after a convincing win over Katherine Roy on Friday night. She’d be an exciting prospect at flyweight for sure, and might be a better natural fit at 125 despite having her heart set on 115.

Porto has been a fixture in the Invicta flyweight division for over four years now. She holds wins over Modafferi and Zoila Frausto, and would be a top-caliber flyweight in the UFC.

Former Ultimate Fighter: Season 18 contestant and UFC fighter Modafferi didn’t find the UFC success she hoped for; the main reason was that she was forced to fight at bantamweight. If the UFC opened up the “Happy Warrior’s” natural weight class, she would make an immediate impact in terms of fighting and fan likability.

Lee is a notable flyweight in Invicta, and recently earned the 125 strap under Legacy Fighting Alliance when she submitted Heather Bassett. Lee would be a marketable fighter under the UFC banner, and bring finishes to women’s MMA. All but one of her six professional victories have come by way of knockout or submission.

The former featherweight and bantamweight seems to have found her home at flyweight, as she is on a three-fight winning streak. She has fought at Invicta, Bellator, Pancrase and BAMMA. If the biggest MMA promotion in the world would be inclined to sign her, she could add UFC to her resume as well.

The Scottish standout looked at her peak performance level when she fought Letourneau in the lone UFC women’s flyweight bout. After suffering losses to Maryna Moroz and title-challenger Jessica Andrade at 115, a move up to 125 could make the always-exciting “Jo Jo” a force to be reckoned with.

Letourneau is the definition of a “tweener” in MMA. She’s undersized at bantamweight, but the cut to strawweight is too draining for her. The lack of a 125 lb. division has forced her and the UFC to part ways. Despite being on a three-fight skid, fans would surely welcome back the former title-challenger if the UFC is inclined to make a division suited to Letourneau’s natural weight class.

The Aussie has been one of the most vocal proponents of a UFC women’s flyweight division. Rawlings has admitted to not being able to push her body to make strawweight anymore, and it sounds like she’s done with that division. She would be a recognizable name should the UFC decide to add her desired weight class.

Macedo appears to be another “tweener,” like Letourneau. The very talented Macedo was extremely undersized in her UFC debut opposite Ashlee Evans-Smith. It’d be sad to see an exciting young prospect take unnecessary losses against much larger competition. Fans would likely be able to see the full extent of Macedo’s prowess if the doors to flyweight open.

It’s no secret that 11-6 Jessica “Evil” Eye is at her best at flyweight. She racked up an impressive 10-1 record before entering the UFC, with the majority of her bouts at 125. Like Macedo, Eye is extremely talented, yet undersized, and the opportunity to fight at her natural weight class would be beneficial.

The talented kickboxer began her MMA career as a flyweight prior to dropping to strawweight to be able to compete in the UFC. Unfortunately, Kish has struggled to make weight when it comes to 115 fights in her career, missing the mark twice. Women’s flyweight would offer Kish the chance to compete to her fullest potential, where she could get back to putting on exciting bouts.

The Japanese women’s MMA star’s only two losses have come in the UFC against Leslie Smith and former bantamweight champion Miesha Tate. Not bad. If the UFC would be able to entice Nakai to once again leave Japanese MMA promotions behind, it’d be interesting to see where Nakai stacks up against UFC women more her size.

This is a bit of a long shot, considering Honchak hasn’t fought since 2014 due to injuries and the lack of challenging opponents. One of the best pure flyweights wouldn’t have to worry about the latter though if given the chance to compete in the UFC. It’d be exciting to see where the 10-2 former Invicta flyweight champ would stack up against today’s UFC caliber flyweights. Honchak holds wins over Felice Herrig, Aisling Daly, Nina Ansaroff, Smith, Porto and Modafferi.

Shevchenko has found much success as an undersized bantamweight, as she’s defeated fighters like Holly Holm and Julianna Pena. She’s likely the next in line for another crack at bantamweight champion Amanda Nunes, who defeated her in a non-title bout. Imagine what she can do as a flyweight in MMA? “The Bullet” has the potential to be a two-weight UFC champion.

Speaking of two-weight champion potential, the strawweight champion could be a prime candidate to make the move up to flyweight. Jedrzejczyk has said that she is more comfortable making strawweight now than a few years back on a Facebook Live session, but she still aspires to be a two-weight champ. It’d be an amazing story-line to see if one of the most popular female mixed martial artists can successfully hold two UFC titles simultaneously and be the first to do it.

Well, that would be a full division in terms of a top-15, complete with a champion and all. Obviously, this is all hypothetical and would completely hinge on whether the UFC decides to create a women’s flyweight division. If they do, it’d be awesome if it looked something like this list. Who else would you like to see compete in the division, if it comes to fruition?