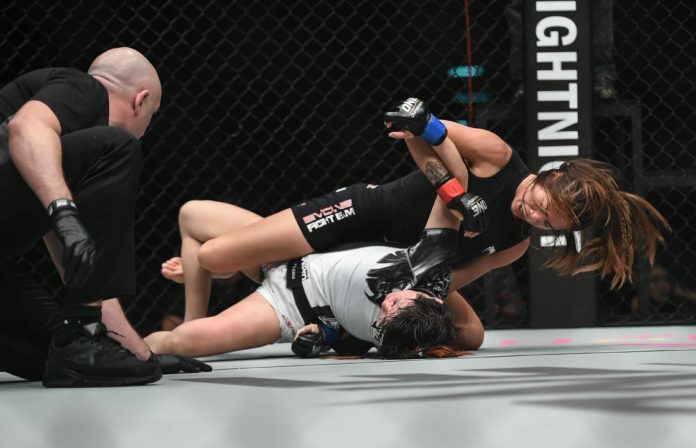 The main event at ONE: WARRIOR KINGDOM was an absolute blast, as champion Angela “Unstoppable” Lee was able to keep her title around her waist with a victory over Taiwanese talent Jenny Huang.

The Impact Arena in Bangkok, Thailand was treated to a fast paced start to the headlining contest.

Lee worked forward for the first minute landing some nifty kicks and straight punches that had Huang back pedaling. The reach advantage of Lee let her dictate the distance and her long punches connected at will.

With just under two minutes remaining in the first round, Lee landed a very strong left hook and followed up with a blistering amount of punches and kicks. Huang was able to show her grit, as she held on and continue punching. The United MMA product finished the round strong with precision striking.

A missed spinning backfist for Huang missed to start the second frame. That helped Lee take the center of the cage and pour on the pressure. “Unstoppable” continued to push forward and land stellar kicks, knees and punches. After an accidental low blow on Huang, the fight resumed and Lee came out swinging. Much like round one, Lee showed her improved striking game and landed an onslaught of strikes.

For the first time in the fight, the ladies touched gloves to start round three. Huang continued to throw counter strikes, but they came off of big strikes from Lee. Despite being used as target practice, Huang showed utter determination to continue moving with Lee. The Evolve fighter took the fight to the mat with two and a half minutes left in the frame and went to work. Lee took the back of a flattened out Huang and teed off with big punches. After some unnecessary shots, the referee was forced to step in and stop the punishment.

The 20-year-old earned her first title defense, as the end was officially called at 3:37 of the third round due to strikes.

Lee kept her record unblemished at 7-0 and kept the Atomweight World Championship in her possession. Unstoppable proved that she is a force to be reckoned with in the atomweight division and that her stock has definitely risen.

Following the bout, Lee gave credit to her opponent Huang for being the warrior she was inside the ONE cage.

“Well I have had some time to work (on the striking) because I haven’t fought in a while, so it feels really great,” Lee said post-fight. “It feels like I’m back home here in the ONE Championship cage. It feels amazing, I cannot describe what I’m feeling right now. Thank you guys for coming out. I have to say thank you to my opponent Jenny [Huang] for being such a courageous warrior. She brought out the best in me.”