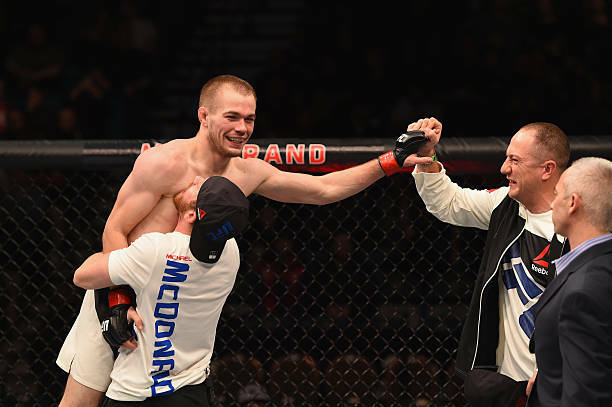 Bellator MMA has been on fire with their signings lately, and it doesn’t seem as though they plan on slowing down anytime soon. Former UFC bantamweight title-challenger Michael “Mayday” McDonald is the latest free-agent to sign with the Scott Coker-led promotion.

The signing was confirmed by ESPN on Friday.

Fighting out of Modesto, California; Michael “Mayday” McDonald (17-4) made his UFC debut in 2011 at the age of 20. After two straight decision wins, “Mayday” picked up two consecutive, brutal first round knockouts against Alex Soto and bantamweight legend Miguel Torres. This earned him a shot at the interim bantamweight title against Renan Barao. Despite looking good early, McDonald was submitted in the fourth round.

He rebounded a few months later, earning himself Submission & Fight of the Night honors when he defeated Brad Pickett via second round submission in Boston. He was given a massive fight vs. Urijah Faber in December of 2013, but lost. After the loss to Faber, multiple injury setbacks forced McDonald out of action for over two years. He returned in January of 2016 and rallied back to submit Masanori Kanehara and earn himself a Performance of the Night bonus.

In his most recent outing, “Mayday” was given a main event slot against heavy-handed brawler John Lineker in July. After multiple wild exchanges, Lineker knocked out McDonald less than three minutes into the first round.

Michael McDonald still had multiple fights left on his UFC contract when he was released. “Mayday” requested that he be released from the promotion, and the UFC obliged. It took him about one week to find a new home in the form of Bellator MMA.

No promotional debut has been announced as of yet.