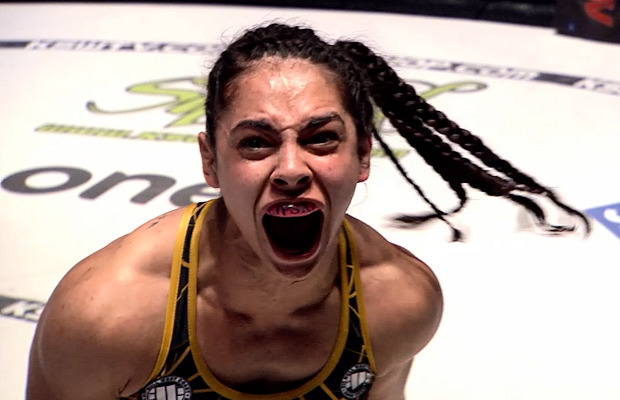 May 27 is the date, and Warsaw, Poland is the place. KSW is a European MMA promotion that has consistently brought fun fight cards to the masses for nearly a decade. But at ‘KSW 39: Colosseum’, they are taking it to a whole different level.

Considering the card is stacked from top-to-bottom, I have decided to preview all ten currently announced fights. I will be starting from the opening bout and working towards the main event. The first article will be a preview of the Inaugural Women’s Flyweight Championship bout that will open up a stacked night of action in May.

Lipski (8-3) is currently riding a six-fight win streak, with five of those wins coming by way of (T)KO. After competing exclusively in her home country ofBrazil for the first eight fights of her MMA career, Lipski was signed to compete under the KSW banner in Poland. She debuted on one of the promotion’s biggest events to date; ‘KSW 33: Khalidov vs. Materla’. In her debut fight she KO’d Poland’s own Katarzyna Lubońska.

After the big win over Lubońska, Lipski returned to Brazil at ‘Imortal FC 4: Dynamite’ and picked up yet another nasty KO win against Juliana Werner.

In October of 2016, Lipski returned to the KSW cage on yet another huge show; ‘KSW 36: Trzy Korony’. She faced German UFC-veteran Sheila Gaff and picked up another first round knockout win in what was quite the two-minute brawl. Gaff’s only career losses in the five years prior to this defeat came at the hands of current UFC Bantamweight Champion Amanda Nunes, and former UFC title challenger Sara McMann. So, Lipski joined some pretty elite company.

There has never been a KSW Women’s Flyweight Champion before. And, though not confirmed, it seems as though this title was made specifically due to the rise of KSW’s “Violence Queen” Ariane Lipski. However, on paper, she has a very tough and worthy challenger in her way before claiming the title in the form of Diana Belbiţă.

Romania’s Diana “The Warrior Princess” Belbiţă (8-2), much like her opponent at KSW 39, is known for her surprisingly devastating ability to end the fight in the blink of an eye.

In 2015 after losing two-straight fights, one of which to future UFC fighter Cristina Stanciu, Belbiţă looked to return to form in 2016. Opening up the year right, the RXF-veteran returned in March of 2016 at ‘RXF 22: Romania vs. Polonia’. She took on Polish-born Paulina Borkowska. Belbiţă went on to win the fight exactly four minutes into the first round via TKO following a nasty headkick.

Three months later at ‘RXF 23: Judgement Day’, “The Warrior Princess” returned and defeated Virak Furo via mounted elbows in the first round. This wound up being the fight that would get Belbiţă a contract with KSW.

Four months after the quick win over Furo, Belbiţă made her KSW debut in October at ‘KSW 36: Trzy Korony’. All of her previous bouts while fighting on the regional scene in Romania were contested around the 135-lb bantamweight division. Upon signing with KSW, Belbiţă decided to drop to 125-lbs in order to join the flyweight ranks.

Much like future opponent Lipski, Belbiţă made her KSW debut against Katarzyna Lubońska. Though it was a pretty comfortable win, Lipski was able to do what Belbiţă could not; finish Lubońska. Regardless, a win’s a win, and getting this win in her KSW debut is what secured Belbiţă a shot at inaugural gold.

There you have it. Youth vs. Youth. Prospect vs. Prospect. Striker vs. Striker. Brazil vs. Romania.

Both ladies earned their shot at gold on the same card in October of 2016. Though on their currents runs, Lipski has undeniably fought the better competition of the two, Belbiţă is still a very appropriate challenge and very well could be Lipski’s toughest fight to date since joining the KSW ranks.

On May 27 at the PGE Narodowy Stadium in Warsaw, Poland, ‘KSW 39: Colosseum’ will open up with a bang. It’s the “Queen of Violence” Ariana Lipski vs. “The Warrior Princess” Diana Belbiţă.