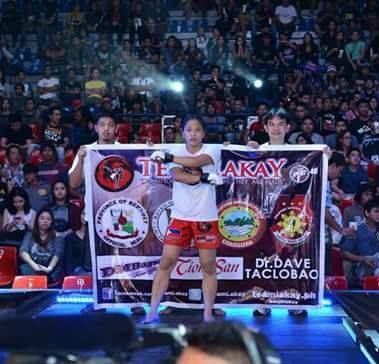 Gina “Conviction” Iniong has always had fighting in her blood, whether she knew it or not. Her father boxed growing up, and despite him not passing that down to her, she definitely saw the potential when it came to the sport.

Iniong began boxing at the age of 17, but not because her dad pushed her to do it. The Filipino admits the only reason she even stepped into the boxing gym was because the trainer at the club was “cute”. Her motivations would change before long.

High school was when she was first fell in love with martial arts, particularly wushu. One of her coaches at school was a student of Team Lakay head coach Mark Sangiao, and he was the one who first introduced Iniong to the discipline.

She honed her skills inside the Lakay Central Gym, and eventually turned to MMA after earning a college scholarship from the University of the Cordilleras through wushu, winning several national tournaments in the process.

All of this was done without the knowledge of her parents. They did not condone the fact that their ‘princess’ was a fighter. The Filipino family is now proud of her, but that was not always the case.

“My father did not know before that I joined MMA until they saw the ticket [to the event],” Iniong recalls. “At first, they did not want me to join because I am a girl, but when they saw me fight, they changed their minds, and now they support me.”

Iniong’s father was by her side for the most part, but her mother — like any other mother — did not want her little girl to get hurt.

“My mother did not want me to fight because she was nervous, and she did not want to see me get punched, but my father thought it was normal because he experienced what it was like to fight,” said Iniong.

Still, the Filipino atomweight tried to keep her MMA pursuits a secret from her reluctant parents for as long as possible. However, they were bound to find out eventually, and they did so quite early in her career.

Coach Sangiao gave Iniong a pair of tickets for her parents prior to her first professional bout at a local Filipino MMA show in February 2010. Instead of giving them to her mom and dad, however, she decided to hide them.

Unfortunately for “Conviction”, they did not stay hidden for long. Iniong’s mother found the tickets and gave them to her father and brother.

They attended the show, and witnessed Iniong submit Sonrex Patanao in the first round via guillotine choke. Following that debut victory, her parents became very supportive. Today, her dad and brother attend most of her fights, and cheer her on from the stands.

Now, Iniong trains at Team Lakay alongside ONE Lightweight World Champion Eduard “Landslide” Folayang, Kevin “The Silencer” Belingon, and former ONE Featherweight World Champion Honorio “The Rock” Banario, who are all also fighting at ONE: KINGS OF DESTINY with Iniong.

On Friday Night, 21 April, Iniong will make her debut in ONE Championship, and she is slated to battle fellow Flipina Natalie Gonzales Hills. The Team Lakay product will walk into the Mall Of Asia Arena with a 4-2 record, as she tries to impress ONE fans for the very first time.

There is no doubt her father and brother will be cheering her on from the crowd, and that her mother will be hoping for the best. That is all Iniong needs.