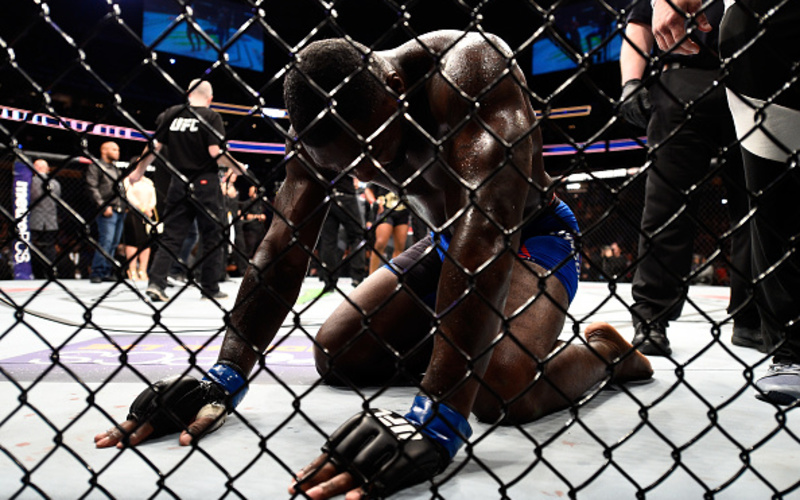 I’ve been doing this for so long, I’ve been in sports since I was eight, it’s just time to move on to something different. I won’t say better, but just different. – Anthony “Rumble” Johnson

At the age of 33, and after a ten year professional mixed martial arts career, Anthony Johnson has decided to hang up the gloves.

Following a second-round submission loss to UFC light heavyweight champion Daniel Cormier, “Rumble” announced his plans to move on and pursue other avenues.

“This is something I had to do for me. I love you all—this is my last fight. I didn’t tell anyone. I didn’t tell Dana White. My family and my friends knew, but I didn’t want any distractions. I enjoyed the UFC. Thank you. I will never, ever forget you, and what better place to end my career than Buffalo, New York.”

His career has been more than average. Since 2012, Johnson has only lost two fights. Those two bouts were against the man who pushed him into retirement at UFC 210–Cormier.

Johnson was born in Dublin, Georgia and wrestled in college before entering the world of MMA at 20-years-old.

He went 3-0 on the regional scene before being signed by the big show in 2007.

Rumble made his Octagon debut at UFC Fight Night 10 and he made his impression felt, as he TKO’d Chad Reiner 13-seconds into the first round.

Johnson’s weight was a problem on a number of occasions throughout his career, and being a large welterweight at the time didn’t help. He missed weight twice in his first seven fights with the UFC.

After going 7-3 within the promotion, Rumble decided to make the move up to 185 pounds. Despite a winning record, the weight cut was catching up to him.

In his middleweight debut, Johnson took on former UFC champion, and veteran, Vitor Belfort. Even though the fight was up a weight class, the former welterweight once again missed the mark. He didn’t miss it by a little bit either, Johnson weighed in at 197-pounds, when the middleweight limit was 186-pounds.

Released from the UFC

Following the loss and missed weight, Johnson was released from the UFC and immediately picked up by Titan FC.

After beating David Branch in his debut–both men missed weight–Rumble decided once again it was time for a change.

The Florida resident made his move to light heavyweight. This was the move that dictated the rest of Rumble’s career.

He finished his first three opponents by knockout and at WSOF 2 moved up to heavyweight for a one-off fight against former UFC heavyweight champion Andrei Arlovski. “Rumble” earned himself a unanimous decision victory in that outing and followed that up with a knockout against Mike Kyle at WSOF 8.

Return to the UFC

It was a no brainer that the UFC would bring Rumble back, especially after the run he was on.

In his first appearance back with the promotion, Johnson earned a decision victory over top light heavyweight Phil Davis. He followed that win up with two knockout victories against Antonio Rogerio Nogueira, and former number one contender, Alexander Gustafsson.

With Jon Jones suspended, the UFC light heavyweight gold was vacated and two men were waiting in the wings–Cormier and Johnson.

At UFC 187 the two met and Johnson was unable to get the job done. Despite Cormier being rocked in the first round, he was able to hang on and choke Johnson out in the third frame.

Rumble went back to the drawing board.

Winning three more by knockout, Johnson earned himself a second crack at DC’s title, two years after their first meeting.

At UFC 210, Johnson was hoping to have a different outcome than their first fight. However that wasn’t the case. The heavy handed striker turned into a wrestler for the fight and that did not work into his favor.

Cormier was able to withstand what Johnson threw at him and retain the light heavyweight championship by rear-naked choking Rumble again, this time in the second round.

Johnson has easily earned the moniker of “the most feared striker in the sport.”

Even though he has decided to step away from the sport and do something else, there is one fight that the media has been talking about for a long time now. “Rumble” vs. Jones. That fight has never come to fruition, but Johnson is not necessarily counting it out.

“But I feel I’m more, I don’t know if I want to say sad (or) disappointed, for the fans, because I know they really wanted to see it. Day in and day out, people were always talking about Jon Jones and myself fighting each other, and it just never happened. Maybe if I decide to come back one day, we can fight at heavyweight or something like that.”

If Johnson were to return, it’s not going to be any time soon. He has to step away from the MMA game at this time and live life. He needs something “different.”

“It’s just business,” Johnson said. “I want to do something besides going to the gym everyday punching and kicking and rolling around with another dude. That sh*t gets old. I’ve been doing this for so long, I’ve been in sports since I was eight, it’s just time to move on to something different. I won’t say better, but just different.”