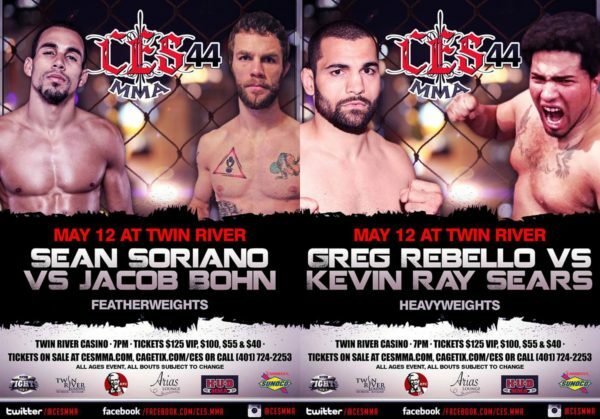 UFC-veteran Sean Soriano will return to his home state of Rhode Island on May 12 to take on Jacob “Jaugar” Bohn. Also on the card, heavy-handed Greg Rebello will meet Denver, Colorado’s Kevin Sears.

Fighting out of Florida; Rhode Island’s own Sean Soriano (9-5) will return home for the first time in five years when he takes on Bohn. After three-straight losses in the UFC, Soriano was released from the promotion in 2015. He then signed with Legacy FC and had a successful debut, scoring a vicious KO against Josh Quayhagen at Legacy FC 48. A few months later he was on the receiving end of a knockout loss at the hands of Thomas Webb. He then returned to CES for the first time since 2012 in September of last year, losing to Levan Makashvili.

Soriano knows the pressure that lies ahead, but when all is said and done, he is also perfectly fine with it.

“There is definitely more pressure, sure, because nobody wants to disappoint their people at home when they’re defending their backyard. But I’ve always been a fighter who’s thrived under pressure,” Soriano says. “Whether I’m fighting at home in Rhode Island or overseas in Asia, I’m at a point in my career where I’m going to rise to the occasion every time and I will do it once again on May 12.”

In what will undoubtedly be the biggest fight of his career, New York’s Bohn (5-3) is also looking to get back on track on May 12. In his most recent outing, Bohn was defeated by Canada’s Alex Morgan in Quebec. Prior to this, he rebounded from a loss to current UFC featherweight Shane Burgos by submitting James Jenkins at CFFC 60.

Bohn is aware of the opportunity ahead of him, and he welcomes it.

“If you’re a real fighter, this is the kind of opportunity you’re waiting for, and praying for,” says Bohn. “This is a huge opportunity to build my name and my record, and I’m ready to take full advantage of it.

This will also be a homecoming of sorts for Rhode Island’s Greg “Ribz” Rebello (21-7) as he continues to climb his way back to a CES heavyweight title shot. The CES mainstay won four-straight in just over a year prior to meeting Ashley Gooch in a bout to determine who would win the vacant CES heavyweight title at CES 37 in August. Gooch rallied to earn himself a 3rd round TKO win over the fan-favorite. Rebello successfully rebounded in January, knocking out Danyelle Williams in just under three minutes.
Rebello is just excited about getting back in the cage to fight on AXS TV.
“I can’t wait,” Rebello says with a grin. “There’s nothing I love more than putting on a show for my guys at AXS TV Fights, and I know Kevin is going to bring it. I’m always looking forward in my career, of course, but I can’t wait for May 12. Don’t blink, man.”
Standing opposite Rebello on May 12 will be Colorado’s, Kevin Sears (6-3). In January at Shamrock FC 282, Sears had three-fight win streak halted by 7-1 Kansas product Kelvin Tiller.
He is excited to enter hostile territory against Rebello in May.
“A lot of guys don’t like to go into ‘hostile territory’ to fight a local fan-favorite. This is what I love and thrive on. This is exactly what I signed up for,” Sears says. “Greg has a lot of fans in New England, and I know I will too after this fight.”