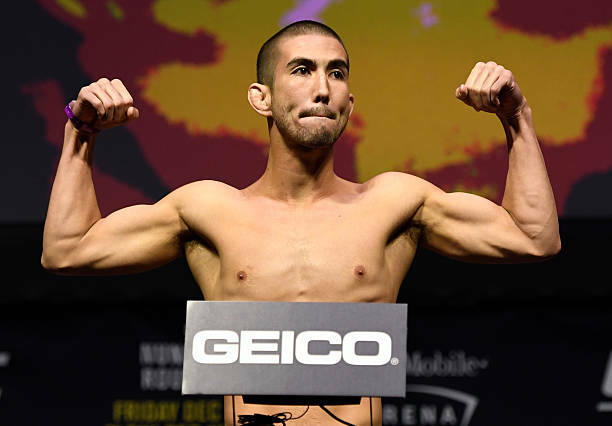 Louis “The Last Samurai” Smolka is a budding star in the UFC. The 25-year-old fighter is currently ranked 14th in the flyweight division, and is looking to improve on that ranking this Saturday against Tim Elliot. Smolka knows that beating Elliott would be a huge step in his rise to stardom.

Smolka began training at the age of seven. He discovered the UFC a few years later and has been hooked since season two of the Ultimate Fighter. Watching Rashad Evans and Brad Imes battle made Smolka think “oh this is the sh*t”, and he immediately knew fighting is what he wanted to do with his life. Since that moment, every choice Smolka has made has helped get him on the path to becoming a champion in the UFC.

Growing up in Hawaii, Smolka definitely had a lot of inspiration. B.J. Penn played a huge role in popularizing the UFC in Hawaii. Shortly thereafter, Hawaii started holding tournaments with superstars like Anderson Silva, Frank Trigg, Carlos Condit, and Robbie Lawler competing across the state. Undoubtedly, seeing the legends of the sport fighting so close to home served as inspiration as Smolka embarked on his climb to the UFC.

Smolka knows there are comparisons between him and Elliott. In his words, Smolka said that he is a “younger, hungrier version of him.” He also said that the fight will be a “wild fu**ing fight, on par with one of the better fights that will happen this year.” Winning a fight of that caliber will skyrocket Smolka into stardom.

The Last Samurai knows what the future could hold for him. Money fights are all the rage and Smolka knows that. Some fighters demand money fights after just one big win. With a win against Elliott, Smolka is confident that the money fight will come to him. When asked, Smolka said “I am the money. Why are you over here asking and begging for sh*t? Do it yourself. Conor never asked for the money fight, he became the money fight.”

Smolka is definitely capable of becoming the flyweight champion. He has no intentions of stopping there, however. In his words: “I haven’t done anything until I win a belt. Even then, I won’t be happy.” He knows he is capable of becoming a champion in multiple divisions and aspires to win across as many divisions as possible.

The UFC’s new ownership’s marketing style is only going to help Smolka achieve his dreams of stardom. Smolka feels that the new ownership tries to turn fighters into individual stars, which is extremely important. The Last Samurai said, “I’m going to be a star, making movies and attending red carpet events.”

As the UFC continues to evolve, Smolka will continue to rise to the top. He will become the money fight and achieve all his wildest dreams. When asked what animal he would ride into battle, Smolka told me that he would choose a hippo because “it would be like riding Mark Hunt into battle.” With controversy within the UFC at an all-time high and the UFC under new ownership, who knows what is possible.

Smolka is not going to ask for the money fight after Tim Elliott. He is not going to stand in the middle of the Octagon and beg for a fight against Demetrious Johnson, or anyone else. Smolka is going to roll over Elliott this weekend and won’t have to ride Mark Hunt to get his hand raised.