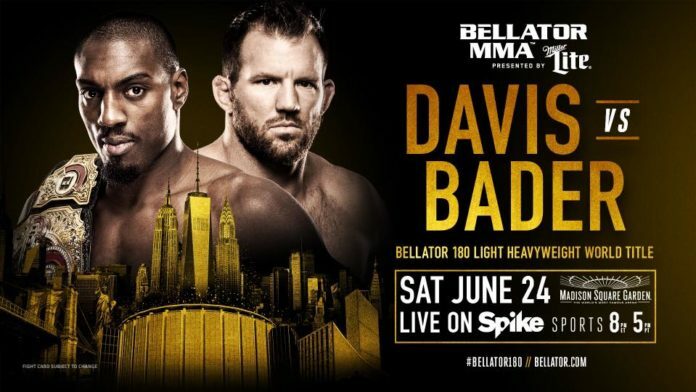 Phil Davis has announced that “King Mo” is out of his Bellator 180 main event bout vs. Ryan Bader, and, in turn, Phil Davis will replace him to welcome Bader to Bellator MMA in a rematch of their 2015 meeting.

The fight announced by Davis on The MMA Hour on Monday.

Davis (17-3, 1NC) entered Bellator MMA as a highly-ranked UFC light heavyweight in 2015. The loss that removed him from the UFC roster was, coincidentally, a very close split decision loss to Bader. “Mr. Wonderful” has gone a perfect 4-0 since joining the Bellator ranks. He made his debut in a one-night tournament defeating Emanuel Newton and Francis Carmont. He then went on to defeat the man he is replacing in New York; “King Mo“. That win was followed up by him dominating then-champion Liam McGeary.

Winner of seven of his last eight, Bader (22-5) enters the Bellator MMA cage in New York City on a two-fight KO streak in the UFC. In November he headlined UFC Fight Night 100 against the legendary Antonio Rogerio Nogueira, winning by TKO in round three. Prior to this, he picked up a brutal KO vs. Ilir Latifi in Germany.

The bout will still headline Bellator 180 on Spike TV live before the Bellator MSG pay-per-view on June 24.