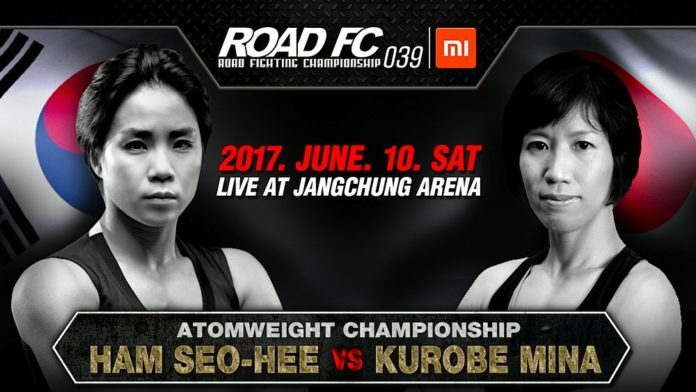 “Hamderlei Silva” is back, and she will be competing for the atomweight title upon her return to Korea.

Seo Hee Ham will take on one of Japan’s top atomweights in the form of Mina Kurobe.

The fight was announced by ROAD FC late Monday.

Team MAD’s Ham (17-8) is a pioneer for women’s mixed martial arts in South Korea, having made her debut 10 years ago. After picking up the featherweight title in DEEP JEWELS, and defending it multiple times, Ham competed twice in ROAD FC, going 2-0 in the process. A 2014 title defense vs. Saori Ishioka is what got her picked up by the UFC. Ham went 1-3 when joining the company, with her final two losses against Bec Rawlings and Danielle Taylor being highly debated.

Master Japan’s Mina Kurobe (10-2) has competed exclusively for DEEP JEWELS for the entirety of her career. She is currently riding a five-fight win streak, including a win over the aforementioned Saori Ishioka. In her most recent outing, Kurobe picked up the DEEP JEWELS atomweight title by defeating Naho Sugiyama.

Aside from the 105 lb title fight, the only other bout on the card is a lightweight contest between Habiti Tuerxunbieke and Zhenyue Huang. The event is scheduled to take place in the early hours of June 10.