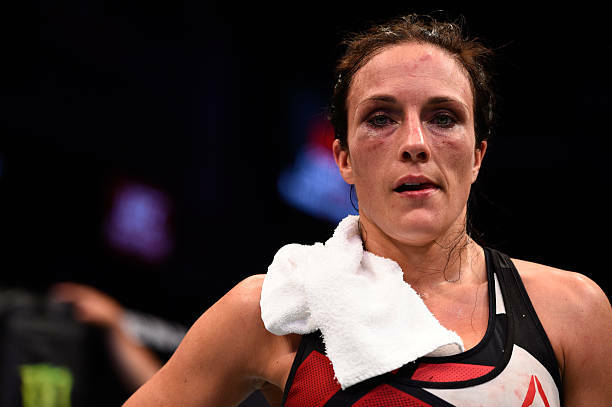 In her first fight since being released from the UFC, Valérie Létourneau will face rising 125-lb prospect Emily Ducote on July 14 at Bellator 181.

The bout was announced by Létourneau on Monday’s edition of The MMA Hour.

Létourneau (8-6) has fought either above or below her natural weight class for the majority of her career. A natural flyweight, “Trouble” competed in the UFC as a bantamweight before making the brutal cut to strawweight. Létourneau fought her way to a title shot against feared champion Joanna Jędrzejczyk. Despite a great effort, Létourneau was unable to beat the champ. She dropped two-straight afterward and was released from the promotion following a loss to newcomer Viviane Pereira at UFC 206 in Toronto.

Ducote (5-2) made her Bellator MMA debut in late 2016 with a record of 2-1. She won two-straight, submitting Bruna Vargas and Kenya Miranda da Silva, both in round two. Her four-fight win streak (two in Bellator) was halted by Ilima-Lei MacFarlane in December. Ducote successfully rebounded in March of this year, submitting Katy Collins in round one.

Bellator 181 is scheduled to take place on July 14 in Thackerville, OK. The main event will feature a lightweight rematch between Patricio “Pitbull” and Derek Campos.