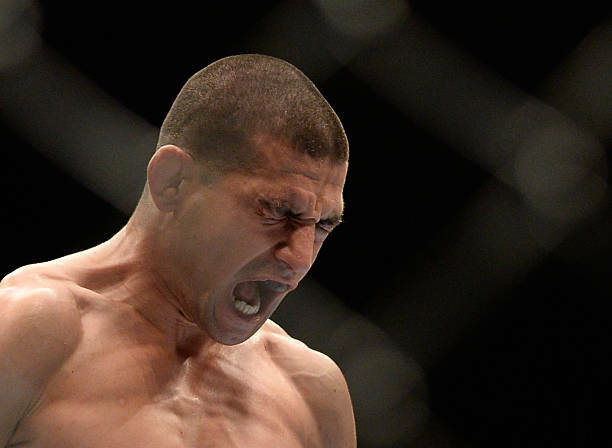 Recently, mixed martial arts fans saw fight news for Vinc Pichel pop up in their news-feed and tickers for the first time in three years when it was announced that he would be fighting Damien Brown in Auckland, New Zealand at UFC Fight Night 110 on June 10.

Pichel said that he likes to think his comeback story is the runner-up to that of his friend and former The Ultimate Fighter: Season 15 coach Dominick Cruz’s fairy-tale championship return, when the former UFC bantamweight champion usurped T.J. Dillashaw’s title in January of 2016.

Pichel’s life began taking a downward spiral on May 24, 2014; the date of his last MMA bout. It all started when Anthony Njokuani broke Pichel’s orbital early in their bout at UFC 173.

“He gave me double vision for 10 months after that fight,” Pichel said. “I don’t even know how I beat Njokuani the way I did. The whole time I was fighting him, I had double vision. I had no clue who I was swinging for. It was a pretty scary thing.”

While Pichel hung tough and won a unanimous decision despite his vision being impaired, that injury started a chain reaction of negative consequences.

For starters, Pichel was told that he had to continue working his job at Swinks Simi Valley Towing (under the American Automobile Association), double vision and all, or lose his job. When driving, Pichel would have to cover one of his eyes each time he’d make a turn depending on if it were a right or left.

Six months after Njokuani broke his orbital, Pichel also suffered a massive shoulder injury while changing a tire at work which resulted in a torn bicep and significant labrum damage; all while he was still suffering from double vision.

While those pair of injuries had kept Pichel sidelined from his UFC job, a workman’s compensation issue rife with corruption arose to make matters worse for the fighter. On top of all of that, Pichel said that he and his fiancee broke-up in January of 2015.

Pichel participated in a tour where he met with U.S. Troops to offer support following his shoulder surgery in March of 2015, which is when Pichel was forced to deal with the shady workman’s comp case.

“As I was doing that tour, my boss was in the ear of workman’s comp saying that I was fighting and competing, and that was a massive lie,” Pichel said.

It got worse. Months later, “my job was basically doing everything they could to get me to quit,” he said. “Workman’s comp was not paying me anything and cutting off my benefits. I was running through all my money and savings from fighting. They were threatening me with insurance fraud because I was going to the gym to work out, and they had someone following me around. I had to stop working out. I kind of just kept my head down, collected my disability checks and did whatever I could.”

Pichel finally left AAA in November of 2016, and began working as an electrician for a friend. He soon joined the International Brotherhood of Electrical Workers, where he still works today at their Local 952 branch.

Pichel, 34, now not only has his own life back under his control and is injury-free, but also got to hold on to his fighting career. There were moments when he was very unsure that he would ever be able to get in the Octagon again.

“Just going through that whole workman’s comp battle, I thought I’d have to retire,” he said. “I had a lot of issues mentally dealing with that. My last 10 years has been fighting. It wasn’t something I was ready to let go of yet but I was prepared to if it was something I had to do. I had this strong feeling in the back of my head that maybe I should quit.”

The last emotional hurdle that Pichel was forced to endure was catching his latest girlfriend cheating on him this past January, but that’s in the rear-view mirror now, and Pichel is looking ahead.

The Californian overcame every obstacle facing his return, and didn’t hesitate to take the fight with Damien Brown. He didn’t even know the name of his opponent when he said “yes” to the lightweight bout.

Ring rust has been often debated among fighters, fans, the media, and anyone else who has an eye to the fight game. Questions on the subject typically arise when fighters have not competed in about a year. For Pichel, it will be triple that amount of time. How does “From Hell” Pichel feel about ring rust?

“It’s bulls**t,” he said. “It’s more of a mental thing for guys that kind of doubt themselves. I’m not that way. I’m a super strong person mentally. Once I have my mind set on something, I do it.”

If all goes well for Pichel on June 10, no one will ever associate him with ring rust again. As long as he can stay healthy, he said that he’s eager to make up for lost time and would want to fight once again at UFC 214 in Anaheim on July 29, or any other card around that time.

“I’m gonna try and go on a [Donald] “Cowboy” Cerrone run here and bust out some fights,” Pichel said. “I want to try to escape [this fight with Brown] without any injuries or soreness that will keep me out of the gym for more than a week.”

For now, his attention is turned solely on Brown, a fight that Pichel said he feels good about.

“[Brown’s] a good dude and a tough fighter,” he said. “The fight will be exciting for the fans no matter what. I have all the confidence in the world that this fight will go off without any hiccups.”

So, here Pichel stands; less than two weeks away from making his long-awaited return to action after three years of injuries, work issues and other personal strife. Making it back to the UFC, widely regarded as the best organization in MMA, is a victory in and of itself. But getting his hand raised would provide Pichel with a feeling that he said he wouldn’t be able to put into words.

“It would mean the world. I’ve been through so much turmoil and so many hard times that a win would make all of that worth it.”