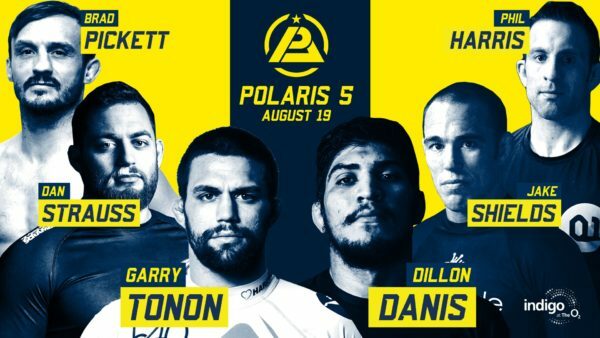 Polaris 5 – the next stacked event from world-leading professional jiu jitsu promotion Polaris – will be streamed live and exclusively on UFC FIGHT PASS on Saturday August 19th at the Indigo at the 02 in London.

The main event features the hugely anticipated grudge match between grappling superstars Garry Tonon and Dillon Danis. The pair have been exchanging barbs on social media – and in person – ever since Tonon emerged victorious from their initial encounter. The grudge match finally happens at Polaris 5 on UFC FIGHT PASS.

Tonon, an IBJJF and EBI champion, said: “Many people wish bad things for their competition, and hate on their acquisition of popularity and success. I on the other hand, am grateful for Dillon’s recent rise to fame and fortune. For when I knock him off his pedestal, he has that much farther to fall, and the bounty of rewards and acclaim that I will reap from my victory will be that much greater.”

The former UFC title contender said: “I’m super excited to be part of the first show in London It will be hard to beat the excitement of slapping AJ Agazarm but I’ll do my best to put on an exciting show with the Raspberry Ape. There’s nothing I enjoy more then going to someone else’s home town and defeating them.”

And, in a featured attraction, recently retired UFC fan favourite Brad Pickett will make his Polaris debut by taking on Phil Harris, an MMA fighter who has successfully transitioned to Polaris.

Pickett retired from MMA earlier this year after a memorable eight-year run in the UFC and WEC, where he defeated current MMA pound-for-pound No.1 Demetrious Johnson and earned a worldwide fanbase for all action style.

Pickett said: “I’m thrilled to be back competing. It’s very different to MMA but appeals to me because I am a competitive man by nature. Grappling is picking up pace as an exciting sport to watch in this country and Polaris is playing a big part in that.”

Also on the stacked main card, Polaris veteran AJ Agazarm returns to action to take on reigning European champion Lloyd Cooper in a gi match, and the Japan vs Brazil rivalry continues as grappling and MMA legends Vitor Shaolin Ribeiro and Caol Uno meet for the first time.

Additional matches featuring the best in British and world-class talent will be announced in the coming weeks. All 15-minute professional grappling matches will be contested under the Polaris rules, which are designed to encourage constant action.

Tickets are on sale now from the Indigo at the 02, details can be found here.