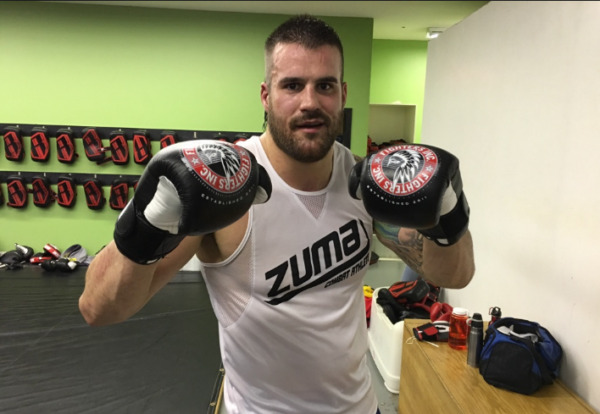 On Friday evening, Tim Hague stepped inside the ring for the very last time. He faced Adam Braidwood in a boxing match in Edmonton, Alberta, and was knocked out in the second round.

Hague was later transported to hospital and on Sunday, June 18, Hague passed away.

Adam Braidwood on Tim Hague: “I Knew in the Ring”

On Monday afternoon, Braidwood spoke to media for the first time and was very emotional with CTV News.

“It’s not a good thing for anyone involved. I want to keep the focus on Tim and his family. Especially his son, they’re the real like victims here. Everyone keeps saying this about me, but just keep it about them the best that you can because I can deal with that, I’m still alive.” Braidwood said.

Hague stepped in on short notice and faced a very dangerous opponent in Zuma MMA’s Braidwood.

“You never know in boxing. Visa’s, this and that, and Tim’s brave, so he stepped up and said he would fight me. We talked beforehand and we were going to make it a really good fight. That’s what we wanted. I know he was training hard and I’ve got the utmost respect for Tim.” said Braidwood.

News swirled around social media that Hague had been admitted into the hospital on Friday evening. On Saturday many rumors swirled that he had already passed, however it didn’t come until Sunday when his sister informed CTV that he had officially passed.

Braidwood however said, ‘I knew man.’

“I knew in the ring. I saw the way he fell man. Everybody talks about my little celebration and I’ve gotten comments before that I didn’t celebrate or hype up or this or that. I waited on my knees for Tim to move after I did my stupid little celebration. I don’t care about that, people can say whatever they want. I waited on my knees, I watched him, he moved, I picked him up because his team was struggling to pick him up. I carried him to the corner and I could see in his face and like…” admitted Braidwood.

Many media members and pundits alike made statements that the fight should have been stopped sooner or after Hague had been knocked down. Braidwood had a message for those journalists.

“What do they know? They don’t fight. He wanted to keep fighting. Journalists, this, that, people who write stuff, like, they don’t know what they’re talking about. What kind of country club lifestyle do they live? Where they get to call the shots, like what we do in there. It gets hyped up. You watch these movies, you watch TV, this and that, it’s serious business. Now you’ve got all these fake coaches running around and they don’t care about anybody. They need to leave their comments off. Tim wanted to keep fighting and that’s what we do. If people have delusions about what this sport, about what life is really like for someone like me who has nothing else, then they can walk in my shoes and see what it’s like. I would have done the same thing and he would have done the same thing to me. Trust me.” said Braidwood.

“I was in the ring. I was there. I’ll be honest with you, I was like it’s time to stop this fight. I was hoping Tim would stop it himself and if he doesn’t then I was like we have to finish it until it’s done. And it’s nobody’s fault. It’s not the refs fault. The ref asked and if you’re conscious and you’re collective and you have your stuff together, I saw the video, Tim was still there and he said he wanted to keep fighting, so that’s what happens. And that’s just the truth man. There’s no speculation about it. He wanted to keep fighting, so we kept fighting.” Braidwood admitted.

Check out the full interview below.