ONE Championship brings stacked card to Macao in August

ONE Championship brings stacked card to Macao in August

ONE: KINGS & CONQUERORS SET FOR 5 AUGUST IN MACAO 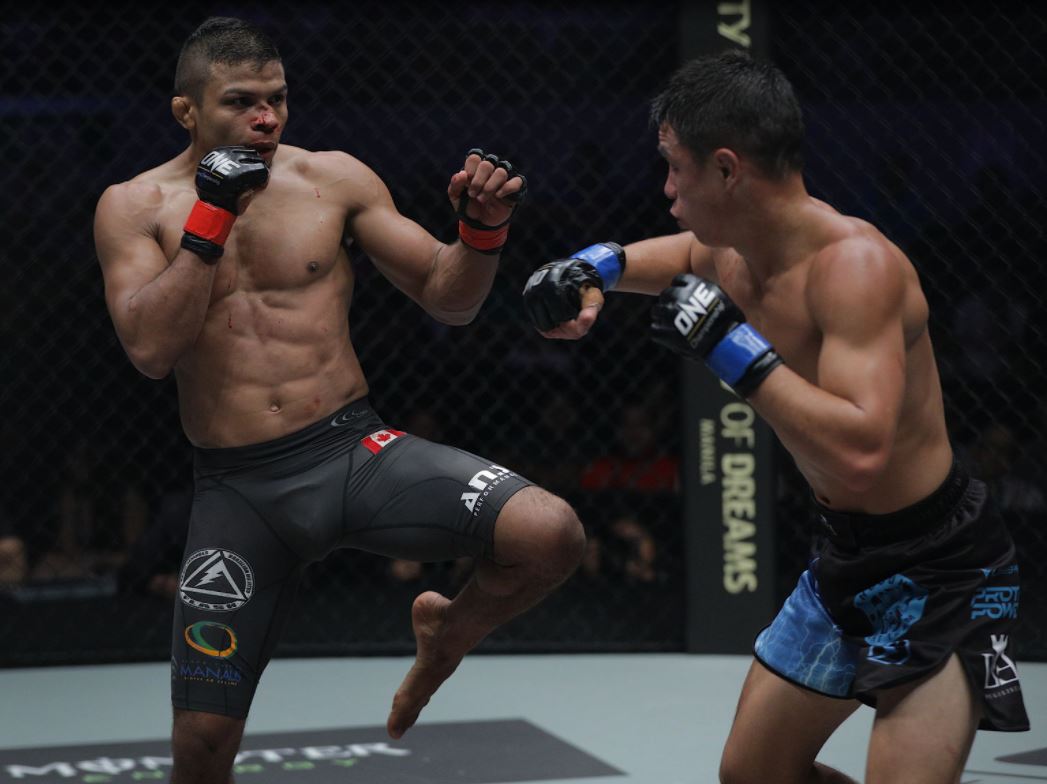 Photo via ONE Championship

27 June 2017 – Macao, China: The largest sports media property in Asian history, ONE Championship™ (ONE), has announced its second blockbuster event in Macao, China. ONE: KINGS & CONQUERORS will once again light up the glamorous Cotai Arena of The Venetian Macao with a showcase of authentic martial arts action. In the main event, ONE Bantamweight World Champion Bibiano Fernandes of Brazil will take on top contender Andrew Leone of the United States.

Ticket information for ONE: KINGS & CONQUERORS is available at www.onefc.com

Chatri Sityodtong, Chairman, and CEO of ONE Championship, stated: “ONE Championship is thrilled to announce another amazing extravaganza at the world-class Cotai Arena in Macao. Our last show did extremely well to showcase our unique brand of world-class martial arts action, and we are excited to do it all over again this August. We have an amazing card planned for fans all across the world, including a blockbuster championship showdown between tremendous competitors in Bibiano Fernandes and Andrew Leone. The interesting clash of styles should provide fans a solid matchup.”

37-year-old Bibiano “The Flash” Fernandes of Brazil is the reigning ONE Bantamweight World Champion and widely considered one of the best bantamweights in the world. He made his promotional debut back in 2012 and captured the title in 2013, and has since then remained unbeaten inside the ONE Championship cage, showcasing tremendous striking and grappling ability. A winner of his last 12 bouts, including three submissions and two knockouts, Fernandes is set to defend his title against Andrew Leone.

Andrew Leone of Cortland, New York, is a 27-year-old martial artist who trains alongside some of the most talented combat sports athletes in Asia at the renowned Bali MMA gym in Bali, Indonesia. With a standout record of eight wins and only two losses, Leone is coming off three solid victories over top caliber opponents, earning him a shot at the ONE Bantamweight World Championship. In his next bout, Leone will challenge Bibiano Fernandes for the world title.

27-year-old Timofey Nastyukhin is a professional martial artist from Russia competing in ONE Championship’s stacked lightweight division. He owns a 10-3 record, with all of his wins coming by spectacular finish. With four submissions and six knockouts on his resume, Nastyukhin is considered one of the finest offensive forces in the promotion. He announced his arrival on Asia’s biggest stage with an emphatic flying knee knockout victory over Eduard Folayang in 2014, and also owns stoppage wins over top talents Rob Lisita and Yusuke Kawanago. This time, Nastyukhin is set to face Koji Ando.

Koji “The Commander” Ando is one of Japan’s fiercest competitors, having been a professional martial artist since 2008. The Japanese combatant is never in a boring bout and always remains a threat no matter the opponent. With an array of diverse striking skills coupled with solid submission grappling credentials, Ando is ready to claim victory once again inside the ONE Championship cage. This time, he battles Timofey Nastyukhin.

Shannon “OneShin” Wiratchai of Thailand is a staple in exciting and memorable battles inside the ONE Championship cage. A mainstay of Bangkok Fight Lab, he trains in various martial arts disciplines at home in Bangkok, including Muay Thai, boxing, wrestling, and Brazilian jiu-jitsu. An offensive innovator, Wiratchai likes to be creative with his striking, employing a myriad of unpredictable off-angle elbows and kicks. Wiratchai seeks to continue his winning ways in ONE Championship as he takes on the veteran Rob Lisita.

34-year-old “Ruthless” Rob Lisita of Campbelltown, Australia, is known as a relentless offensive force, armed with powerful striking combinations intended to score highlight-reel knockouts. He is 14-9 as a professional martial arts athlete and has proven to be a fixture in big bouts owing to his fan-friendly style. A veteran competitor who has faced the best in his division and beyond, Lisita looks to continue fulfilling his goal of competing against the promotion’s top contenders. His next assignment is fierce striker Shannon Wiratchai.

21-year-old Joshua Pacio of Baguio City is a professional martial arts athlete with a 9-1 record. He is one of the Philippines’ most talented strawweights. A member of the famed Team Lakay MMA gym, Pacio is a wushu specialist with a solid grappling repertoire. All but one of his career victories have come by spectacular finish, including five wins by submission and three wins by knockout. A former ONE Strawweight World Championship title challenger, Pacio is looking to bring himself back to title contention with another victory. A tough task is ahead of Pacio, however, as he is slated to lock horns with Hayato Suzuki.

30-year-old Hayato Suzuki of Saitama, Japan, is a professional martial arts athlete with an unblemished 16-0-2 record. Spending the majority of his career competing in his native Japan, Suzuki is known as a well-rounded warrior who has the ability to stop his foes with his heavy hands and technical grappling skills. Out of 16 wins, Suzuki has finished 11 of his opponents, including six by submission and five by knockout. He is set to make his ONE Championship debut against rising star Joshua Pacio.

35-year-old standout Eric “The Natural” Kelly of Baguio City is widely considered one of the best homegrown martial arts athletes to come out of the Philippines. The wushu practitioner combines solid striking techniques with high-level grappling skills, which has resulted in nine impressive submissions and one knockout out of 12 total victories. Kelly’s most impressive showing to date came via a hard-fought submission win over Rob Lisita in 2014, a performance which earned him a US$50,000 ONE Warrior Bonus. In his next bout, Kelly will face tough striker Kotetsu Boku.

Kotetsu “No Face” Boku, although originally from South Korea, is a Japanese martial arts legend and the former ONE Lightweight World Champion. With more than 30 professional bouts on his resume, Boku has the experience of a seasoned veteran and has seen it all inside the cage. Always a crowd pleaser, Boku utilizes his dynamic boxing background with world-class grappling to subdue his opponents. He’ll now get the chance to put on a show once again opposite Eric Kelly.

Unbeaten 28-year-old “Rock Man” Chen Lei of Changsha, China is a Brazilian jiu-jitsu practitioner and the Shanghai Open BJJ Champion. His ability to grapple has led Chen to five straight victories as a professional martial artist. In his last bout, Chen made his ONE Championship debut a successful one, defeating Jeremy Meciaz by first-round technical knockout. Chen now moves on to his next contest, a tough assignment against Saiful Merican.

Saiful “The Vampire” Merican of Kuala Lumpur, Malaysia, is an explosive bantamweight striker who starts bouts fast, always looking to end matters early. He has had great success inside the ONE Championship cage with his fan-friendly and aggressive style. In his last bout, Merican stopped Burn Soriano, winning by TKO at the end of the first round. This time, Merican takes on the surging Chen Lei.

28-year-old Herbert “The Blaze” Burns of Rio de Janeiro, Brazil, is one of the most talented featherweights in ONE Championship. The grappling specialist has a penchant for locking in bout-ending submissions and is a legitimate threat to any opponent on the mat. With his strong background in Brazilian jiu-jitsu, Burns is widely considered as one of the top contenders in the division. He squares off against Russian combatant Magomed Idrisov next.

Professional martial arts athlete Magomed Idrisov is a newcomer in ONE Championship, competing previously for local Russian promotion M-1 Global. He owns a 7-1 record comprising of four wins by decision and three by knockout. Since dropping his first bout as a professional, Idrisov has gone on to win six straight contests, which includes capturing the M-1 Global featherweight title. He will now look to take his talents to the global stage of Asian martial arts. Idrisov will take on tough grappler Herbert Burns in his promotional debut.

Rika “Tinydoll” Ishige is a 28-year-old female atomweight from Bangkok, Thailand. She is of mixed Japanese and Thai heritage, beginning her martial arts training at age nine with aikido and taekwondo. Heavily influenced by her late father who trained in judo, Ishige went on to hone her skills as a martial artist and turned pro earlier this year. In her last bout, Ishige defeated Nita Dea, impressing fans with her solid grappling skills. She is currently on a two-bout winning streak in ONE Championship. Next up, Ishige takes on the Philippines’ Jomary Torres.

Jomary Torres is a female atomweight contender from the Philippines with a 1-0 professional martial arts record. In her last bout, Torres dominated opponent Krisna Lindaga to win by unanimous decision after three rounds. Torres is set to make her ONE Championship debut against Thai competitor Rika Ishige.

Leandro Ataides of Rio de Janeiro, Brazil, is a 30-year-old martial arts veteran who owns a professional record of nine wins and three losses, with only two of Ataides’ victories reaching the final bell. In his last bout, Ataides scored a much-needed win, stopping Mohamed Ali with a highlight-reel flying knee that was named ONE’s Knockout of the Year 2016. Despite mixed results so far in his career, the hard-charging Ataides remains a force to be reckoned with at middleweight and will look to excite the crowd by defeating his next opponent, Michal Pasternak.

Middleweight contender Michal Pasternak of Pinczow, Poland, is a tall and lanky martial artist with a 12-2 professional record. A well-rounded competitor, more than half of Pasternak’s victories have come either by knockout or by submission. In May of 2016, Pasternak challenged Brazilian jiu-jitsu legend Roger Gracie for the inaugural ONE Light Heavyweight World Championship, falling short of victory. Now, Pasternak takes on Leandro Ataides.

Malaysian warrior Marc Marcellinus makes his return to the ONE Championship cage and to professional competition after taking a short break. He is a solid competitor with solid all-around skills and a knack for striking. Marcellinus is set to go shot for shot with Vietnam’s Tran Quang Loc, who is making his professional debut.