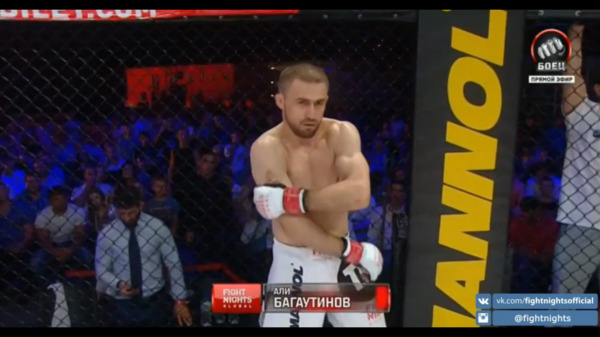 After a striking battle in the opening round, Bagautinov was able to sink in the rear-naked choke late in round two.

Nobre came in with a spinning back-fist before clinching “Puncher” against the fence. That closing of the distance allowed Nobre to get a pretty solid Thai clinch on Bagautinov. After eating a few solid knees at the hands of Nobre, the Russian reversed position. Not long after, Bagautinov got the fight to the mat.

Bagautinov landed some solid shots on a grounded Nobre before what seems to be a ref/fighter misunderstanding between the referee and Pedro Nobre. The referee stepped in and said something in his native language which was not understood by Nobre. During this time Nobre let his guard down which allowed Bagautinov to sink in the RNC.

He thought that referee pointed to the violation (Clinging to the mesh). After he recognized that just does not understand English language

Regardless, Bagautinov rebounds from the brutal KO loss to Tyson Nam in April. Check out the full fight below, skip to 12:40 for the finishing sequence!