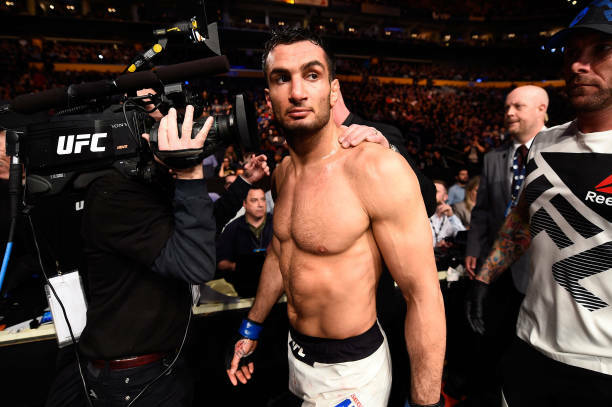 If the reports are true, Bellator has just added a massive name to their lacking middleweight division in the form of former Strikeforce Champion; Gegard Mousasi.

MMA Junkie’s Chamatkar Sandhu reported the signing on Twitter. The very reliable kimura.se added, even more, validity to the report.

If true, Mousasi (42-6-2) leaves the UFC ranked #4 in their middleweight division.

Gegard Mousasi could potentially, even realistically, fight for titles in two weight divisions under the Bellator MMA banner. He has fought in both the middleweight and light heavyweight divisions throughout his entire 50-fight career, though fighting exclusively at 185-lbs since 2013.

Early on in his career, Mousasi won the Cage Warriors Middleweight Championship, making quick work out of Gregory Bouchelaghem. Less than two years later he traveled to Japan and won the DREAM 2008 Middleweight Grand-Prix, along with the inaugural DREAM Middleweight Championship. That four-fight run in the tournament included wins over Denis Kang, Dong Sik Yoon, Melvin Manhoef, and “Jacare” Souza, the last two wins taking place on the same night.

Less than a year later, Mousasi joined Scott Coker’s Strikeforce promotion and won the Strikeforce Light Heavyweight Championship with a 60-second KO win over Renato Sobral. He then went on to defeat Sokoudjou before losing the title by unanimous decision against “King Mo”.

He then went back to Japan and won the DREAM 2010 Light Heavyweight Grand-Prix, winning the Light Heavyweight Championship in the process. The road to the title included stoppage victories over Jake O’Brien and Tatsuya Mizuno. He defended the belt against Hiroshi Izumi before returning to Bellator, going 2-0, and signing with the UFC.

Since joining the UFC in 2013, Mousasi has amassed an impressive record of 9-3 w/ 6 finishes. This includes wins over former world champions Chris Weidman, Vitor Belfort, and Dan Henderson, all three of which came by way of (T)KO.

Hell, a bit of a long shot, but Mousasi has competed against heavyweights in the past, beating Gary Goodridge and Mark Hunt.

All-in-all, absolutely tremendous signing for Scott Coker and Bellator MMA if true. Their middleweight division has never exactly been their strongest, but the addition of Gegard Mousasi could certainly change that.

The free-agent signings keep on coming, and Bellator MMA continues to make waves. What a time to be a fan of MMA.

EDIT: It has been CONFIRMED! Gegard Mousasi has signed a six-fight contract with Bellator MMA.

A new era has arrived. Me signing my @BellatorMMA contract. Bellator MWs, there is a new sheriff in town. pic.twitter.com/eJ1yDmROcu