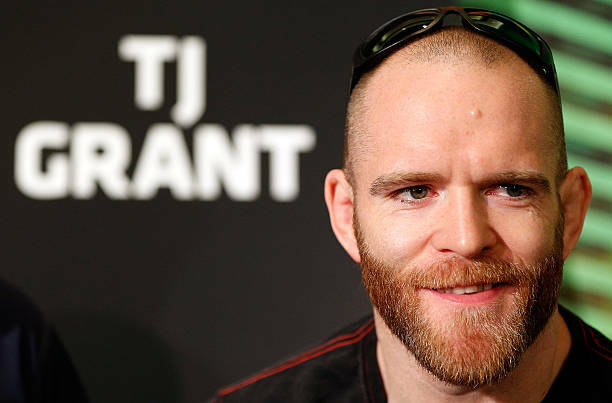 Canadian fight fans are longing for the good old days in the UFC. The time when there were contenders fighting at almost every weight class. There was Sarah Kaufmann in the women’s game, Mark Hominick at featherweight, Georges St. Pierre and Rory MacDonald at welterweight, Patrick Cote at middleweight and there was even a big man like the late Ryan Jimmo at light heavyweight. Canada has not had a legitimate top ten lightweight contender since 2013, when Halifax, Nova Scotia native T.J. Grant made an impressive five-fight march to a title shot between 2011 and 2013.

In 2017 title shots seem to be granted for less than ethical reasons, but Grant earned his the hard way by beating Shane Roller, Carlo Prater, Evan Dunham, Matt Wiman and Gray Maynard. That mean streak set up a shot at then UFC lightweight champion Benson Henderson at UFC 164 in August 2013. Grant was forced to pull out of the title fight due to an injury sustained in training, and little did we know at the time, May 2013 would be the last time we would see Grant inside the Octagon.

Canadian fans were left pondering the “what if” on Grant’s career, and are now wondering if he is the last lightweight contender this country will ever see.

MMASucka caught up with Grant this week and asked him about the lack of contenders coming out of Canada these days, and whether he himself has any plans to change that.

“No, I’m not coming back, I have a young family now and it just doesn’t make sense for me financially. Maybe if some multi-millionaire wanted to pay my mortgage for six months.” Grant jokingly said.

He is currently busy as a family man but still considers himself a big fan of the UFC. He spends his time in Nova Scotia with his wife Belinda, his daughter Casey (4) and his son Duncan (1). He has pretty much fully recovered from the concussion problems he suffered throughout his time in the cage. “No issues anymore. I sometimes forget when it’s beneficial to me, I’m sure my wife can attest to that. I sometimes forget to do chores and stuff like that but that’s probably my own doing,” he said.

Grant has been away from the UFC cage for over four years now, and at 33-years-old, he would need some time to get back to his proper fighting weight. Having just returned from B.C. due to the devastating forest fires, Grant feels that time and patience is the key to helping a fighter climb to the top.

No, I’m not coming back, I have a young family now and it just doesn’t make sense for me financially.

“Well, that’s kinda it, people make their decisions on fighters a lot quicker than they need to these days. I mean you look at a guy like Robbie Lawler. I would never say that he was written off or anything but, he wasn’t really looked at as a guy who would fight for the title. He went on his journey, and when he came back to the UFC he was ready to lay a hurtin’ on some guys,” said Grant.

“People judged me earlier in my career too, thinking I was just a .500 fighter at 170-lbs. You have to take the slow and steady approach. You have to be disciplined and put the time in,” notes Grant. “I think Olivier Aubin-Mercier is a hell of a fighter as far as his strong points. He looks like he is getting better at his striking and he’s strong as hell too.”

“You can’t really write anyone off, the landscape has changed a lot though.”

I am a huge T.J. Grant fan, and have interviewed him a few times over the years. He is as straight with his opinions as he was with his viscous elbow strikes. I then asked him his opinion on a bunch of different MMA topics:

Should GSP Actually Come Back?

“If he still wants to compete why not? No matter if you agree with the decision of his last fight or not he still won his last fight. The time away might help him because he was probably really tired and worn out when he left.”

“I’m not going to give any negative thoughts on it. Do I think it is going to be a competitive boxing match, probably not. I don’t think Conor [McGregor] has the experience to even hang with Floyd [Mayweather] but I respect him and what he is doing. He has the balls to take on the best fighter in the modern era in a boxing fight. I do think he might get hurt in the fight though, but I will probably tune in.”

“I’m excited for that one. With [Jon] Jones, you really try your hardest to cheer for him but he pretty much makes it impossible. You have to respect a guy like [Daniel] Cormier, but I would say Jones is going to win again. I was really excited for [Robert] Whittaker-[Yoel] Romero because I like two guys clashing in their primes. I think you could say the same thing about Jones-Cormier II.”

“Obviously it is hard for me to comment on that. I think he is a very good fighter. I was always humble in my approach. I think he would be one of the toughest guys I ever fought.”

Grant is probably the closest Canada has ever come to having a UFC lightweight champion. He was very well rounded and very aggressive in the prime of his career. He left the UFC at the top of his game, and while I’m hopeful for future fighters, he just may turn out to be the last Canadian lightweight contender we ever see.