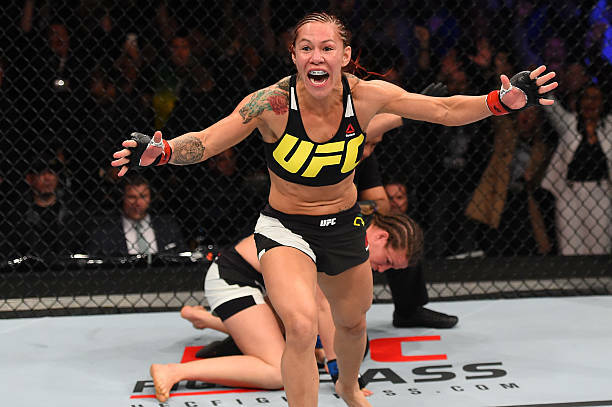 At UFC 214 the main event will settle one of the longest reigning feuds in MMA. Daniel Cormier will face Jon Jones. The result will be give an undisputed light heavyweight champion to the world. The gravity of this contest has overshadowed the fact that two more belts will be on the line.

Tyron Woodley will face submission ace Demian Maia for the welterweight crown in the co-main event. Before that the UFC is once again trot out the women’s featherweight title. This time Cris “Cybrog” Santos will fight Invicta bantamweight champ Tonya Evinger for the strap. The next welterweight contender will be decided, as Robbie Lawler ends his long layoff against fan favorite Donald “Cowboy” Cerrone. The action will kick off with another important fight, as Jimi Manuwa takes on surging prospect Volkan Oezdemir. All of these bouts are worth some time to go over.

Jimi Manuwa Attempts To Step Up

Manuwa looks like a stone cold killer. His knockout power is well known in the light heavyweight division. His biggest problem has been in fights where he fights the top echelon competition, with his two losses coming to his now training partner Alexander Gufstafsson, and to the only person with more power than him, Anthony “Rumble” Johnson. Now Volkan Oezdemir is his next and greatest challenge. Oezdemir has only had two UFC fights, but he’s been impressive in both and his ranking reflects that. He’s a talented striker who can outpoint you, or stop you. Expect a stand-up war.

It will be 355 days since Robbie Lawler was in a cage. After his devastating knockout loss to Woodley at UFC 201, Lawler changed camps and took enough time off to properly heal his body and mind. He starts his revenge tour against Cowboy Cerrone, one of the most active fighters in the sport, who was forced to take time off after getting knocked out by Jorge Masvidal. Cerrone is a kickboxer who can knock out opponents, but can also submit them. He’s come into his own since moving to 170 pounds, and is likely to have the crowd behind him. Lawler is a monster with huge power, technical abilities, and is incredibly durable. The big concerns will be if his durability is affected by the layoff, and if assimilation to a new training camp causes a slow start. Either guy might challenge for the belt, but this fight will be a fight-of-the-year candidate.

Cyborg Gets Her Shot

“Cyborg” has been waiting for a shot at a belt since she got into the UFC. Her shot comes against Invicta champ Tonya Evinger. Unless Evinger can find a way to out wrestle Cyborg, and control her on the ground, shes toast. Cyborg is the closest thing we have seen in the sport to Ivan Drago. Both are fighters with unnerving power, who have tested positive for steroids. Evinger is a gamer, and has a chance against Cyborg. The chance is slim, but anyone’s chin can fold.

Tyron Woodley is fighting to be the greatest of all-time. That is his ultimate goal. To do that he has to get through MMA’s greatest submission specialist. Demian Maia is the unquestioned BJJ king of the UFC. His striking is much improved, so it will be something for Woodley to keep aware of in between defending the takedowns. Woodley wants to knock him out. Putting Maia on his back is a dangerous prospect, no matter how good your wrestling is. The fight will end in either a knockout or submission.