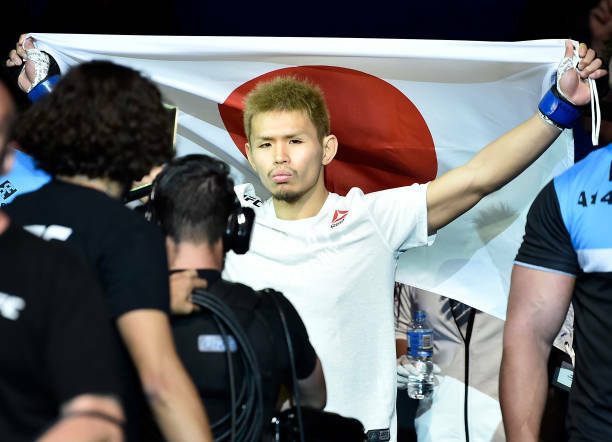 After being crowned Pancrase welterweight champion earlier this month, Daichi Abe has signed with the UFC. He will debut against South Korean brawler Hyun Gyu Lim.

Abe (5-0) challenged Hiromitsu Miura for the Pancrase welterweight title at Pancrase 288 earlier this month. Just 26-seconds into the second round, Abe defeated Miura by (T)KO. This was Miura’s first (T)KO loss since 2009. The 25-year-old finisher said post-fight that he hoped to fight on the UFC Japan card in September. His wish comes true on September 23.

Lim (13-6-1) made his UFC debut in 2013 and quickly became a fan-favorite known for putting on exciting fights. After a 2-0 start to his UFC career, Lim took on former Strikeforce champ Tarec Saffiedine in a 25-minute 2014 Fight of the Year contender. He followed it up with a vicious elbow KO against Takenori Sato but has now lost two-straight, being knocked out by both Neil Magny and Mike Perry. Come fight time, he will not have won in three years. The last victory over Takenori Sato took place on September 20, 2014.

The event will be headlined by a light heavyweight rematch between PRIDE legend Mauricio “Shogun” Rua and Ovince St. Preux. Kickboxing legend and former Glory Kickboxing LHW Champion; Gokhan Saki will make his UFC debut on the card when he takes on Luis Henrique da Silva.

The card is far from complete, but check out the revealed fight card thus far!