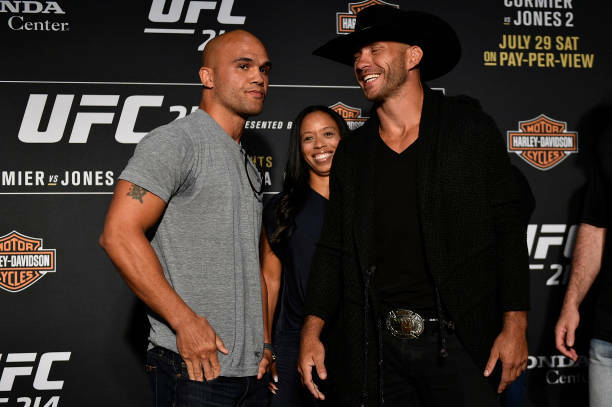 UFC 214 is set to go off this Saturday night from Anaheim and it definitely has the potential to be one of the most exciting fight cards of the year so far. There is no spectacle fighter (CM Punk) or circus build up, (any Conor McGregor fight) but there are three titles on the line and the return of arguably the best fighter on the UFC roster in Jon Jones. This is a stacked card from top to bottom.

Oddly enough, it is none of those things that have me the most jacked up for this card and I believe it will be two veteran stars that will ride in and ultimately steal the show.

Former welterweight champion and straight up brawler “Ruthless” Robbie Lawler will take on “The Cowboy” Donald Cerrone in a fight with major implications on the welterweight division. The stylistic match up is a dream for the traditional striking fan, as it pits power versus precision by two of the very best to ever step inside the cage. These two men do their talking when the cage door closes and I can’t wait to see who comes out on top in this battle of contenders.

Lawler (27-11-1 NC) makes his return after getting knocked out by current welterweight champion Tyron Woodley almost exactly one year ago. It was a fast, first round loss and it remains to be seen whether it was just a bad night for Lawler, or if it may be the start of a slide for the #3 ranked welterweight in the world. Lawler does not know how to bring a boring fight and will be looking to make a statement in his return. I don’t expect him to be cautious going up against Cerrone as he looks to get back to the front of the line and avenge his loss to Woodley. Lawler only knows one way to fight, and he has the perfect partner in Cerrone to deliver a typical Lawler brawl.

Is The Cowboy Mentally Ready

Cerrone (32-8) is also due for a bounce back after his ugly loss to Jorge Masvidal in January. Despite some recent health issues and a sometimes hit and miss motivation, he has a style that you cannot take your eyes off of when he steps inside the Octagon. It is true that he is less of a brawler than Lawler, but his arsenal of intelligent, precision strikes will ensure that this fight will have some epic exchanges. Cerrone is going to have to be all-in with his toughness and mental game because he is going to get hit hard in this fight. He is ranked the #7 welterweight in the world and will look to improve his paydays by leapfrogging Lawler in the UFC pecking order.

There is much at stake in this battle between two well respected veterans of the fight game, and it could be hunger and heart that ultimately wins the day. No matter what the outcome, this very little-hyped, hardly talked about main card fight has all the makings to steal the show right out from under the fights that follow it.