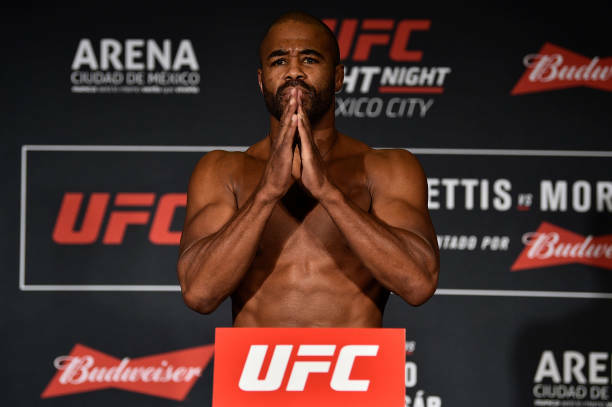 At UFC 88, “Suga” Rashad Evans took the MMA world by storm by knocking out Chuck “The Iceman” Liddell in the second round. After that loss, Liddell would suffer two more knockout losses en route to retirement–posting a record of 1-5 with four stoppage losses.

After their bout, Evans went on to capture the UFC light heavyweight championship from Forrest Griffin at UFC 92 and become a superstar. Eight years later, Evans finds himself fighting for not only his career but his legacy at UFC Fight Night 114.

Rashad Evans is fighting for legacy at UFC Fight Night 114

Since losing to his then-arch rival Jon Jones at UFC 145, Evans has had considerable difficulty finding consistency in the cage. Aside from his dominant first round victory over Chael Sonnen, victories have not come easy for the 37-year-old from Niagara Falls, New York. Since Jones, Evans came up short against Antonio Rogerio Nogueira, Ryan Bader, and Glover Teixeira.

After his loss to Teixeria, Evans re-evaluated his career and dropped down to compete in the UFC’s middleweight division. Evans’ long-awaited middleweight debut, however, was spoiled by Austrailia’s Dan Kelly in a three round split decision loss.

In terms of quality of opponents, Evans’ losses to Bader and Texeria were somewhat palatable, as they were both top-ranked contenders. The Kelly loss, however, stings due to Evans being the significant betting favorite. Even if he managed to edge Kelly on the judge’s scorecards, Evans did not impress viewers. Evans showed a significant decrease in his overall quickness and ability to let his hands go. Flat out, Evans looked old–which is ironic because Kelly is two years older than him.

Flat out, Evans looked old–which is ironic because Kelly is two years older than him.

For a former NCAA Division I wrestler, and UFC light heavyweight champion, walking away is not something that Evans was ready to do. In an interview with Luke Thomas following UFC 209, Evans quickly dismissed the topic of retirement. “I’ve got to get this loss off me. I know I’m better than this,” said Evans. “I know I’m a better competitor than this, and I want to go out there and fight as much as I can.”

Heading into his UFC Fight Night 114 bout against Sam Alvey, Evans finds himself with his back against the wall once again. Though, this may prove to be a favorable situation for him to snap his three-fight losing streak. Alvey is coming off of a unanimous-decision loss to Thales Leites back in April of this year.

In terms of promotion, UFC Fight Night 114 as a card is seemingly flying under the radar–possibly due to the spectacle that was UFC 214. It will be the former champion’s second fight at this new weight class. With a camp change, flying to Mexico in advance to get used to the altitude, and with nothing to lose, we should expect Evans to put on his best performance in years.

Throughout his career, Rashad Evans compiled one of the most impressive resumes in UFC history.

Throughout his career, Rashad Evans compiled one of the most impressive resumes in UFC history. From winning The Ultimate Fighter season two as a heavyweight, to knocking out Liddell with his very own signature overhand right, then eventually going undefeated–culminating in winning the UFC light heavyweight championship–Evan’s has earned himself legend’s status, and is a bonafide future UFC hall-of-famer.

In closing, with a loss to Alvey, Evans will once again have to consider his fighting future. Ultimately, in the grand scheme of things, Rashad Evans has accomplished some incredible feats in the sport. Whatever the outcome tonight, he can look back on a career full of accomplishments and be proud.