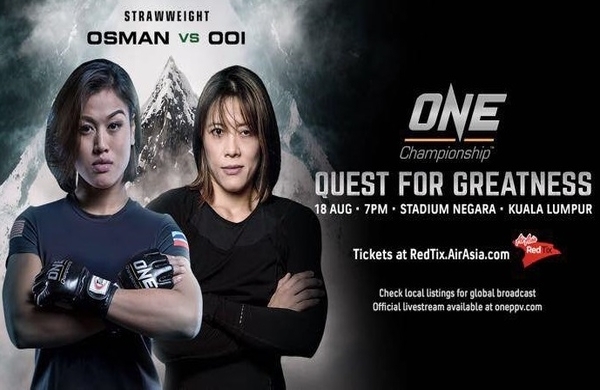 Rising Asian prospect “Mighty” May Ooi is set to make her much awaited ONE Championship (ONE) debut this Friday at ONE: Quest for Greatness.

The Singaporean has amassed an impressive list of accomplishments outside of MMA, which includes representing her country at the 1992 Summer Olympics in swimming. Adding to that list of achievements is a medical degree Ooi fell-back on when serving as a cage-side doctor for the recent 2017 International Mixed Martial Arts Federation Asian Open Championships in Singapore. Where she found herself in a position to combine her medical training with her fight experience to better understand and treat fighter injuries.

ONE Championship’s May Ooi

“All the fight knowledge that I have, I have to apply it in the realm of medicine. Now it’s for the safety of the athletes, and I see the hits and I see the submissions,” says Ooi. “I know potentially what submissions are coming, and I know what they are going for. So, it’s easy for me to treat or to say, ‘this is what happened.’”

For combat sports fans and promoters, a fighter’s professional record rarely ever tells the full story. “Having a perfect record is pretty, but not realistic, we all know that,” stated Ooi.

“Having a perfect record is pretty, but not realistic, we all know that,” stated Ooi.

When you look deeper into her performances you’ll find what isn’t obvious from her 2-2 record: the quality of her opponents. The likes of which include five-time European Pankration champion, Anna Bezhenar “The fight with the Pankration champion, it came to a decision, it’s not a loss I have to be ashamed about,” Ooi said while thinking back on the fight with the Ukrainian.

Ooi’s response is one of confidence, labelling the set-backs as “learning curves.” She focuses solely on the lessons to be learnt. “When it comes to competition, the mindset is always the same, it’s to win,” she said.

It therefore came as no surprise when the next fight she booked was against ONE veteran, Ann Osman. “It’s my first fight in ONE Championship and who am I getting? Ann Osman.” Osman is one of the pioneers of female fighting in ONE, having fought all her eight professional bouts for the promotion since her debut at ONE FC 11: Total Domination.

“It’s my first fight in ONE Championship and who am I getting? Ann Osman.”

Ooi will not only have to deal with Osman’s experience, but also with the fact that the fight will be taking place in Malaysia, Osman’s backyard. But the former Olympian is no stranger to the big stage, and she won’t be fazed by the bright lights of the Stadium Negara, in the neighboring Kuala Lumpur.

“In all the years of competition, I’ve been to very hostile environments, hostile crowds. The team had to be escorted out by security,” said Ooi. “The crowd doesn’t bother me, I don’t even hear them. I see them, I know they’re there, but they don’t even register.”

Ooi has competed at the highest level most of her life, and truly understands the spirit of the fight game. Her respect for her opponent is evident and can been seen from her social media updates. But what you’ll also find among those updates is this quote, “All civility ends when the cage door closes.”