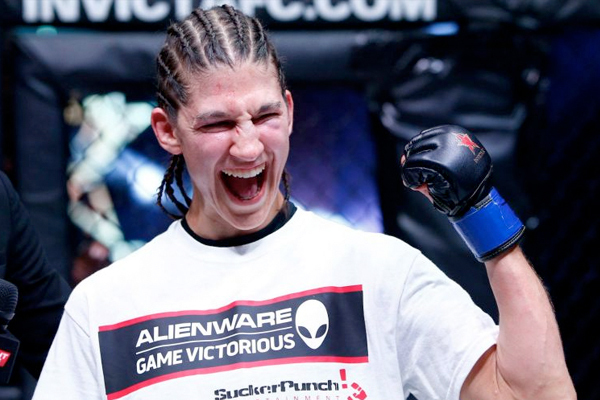 Wednesday, August 30th marked the return to the airwaves of The Ultimate Fighter. Entering its 26th season, the venerable reality show is on a mission to crown the first UFC female flyweight champion. So too, does the TUFtermath return! With 16 competitors ranging from young upstarts to established veterans, this season is guaranteed to have some superb fights. TUF 26 should also be mercifully free of coaching drama, as well. Coaches Justin Gaethje and Eddie Alvarez are both the type who prefers speaking with their fists. This is more of a commentary than it is a recap, so don’t expect everything to be in chronological order. You’ll just get what I feel are the most important parts of the episode, plus the fight results. So, let’s get down to business.

#2) Score One for Inclusion – There is a lot of talk going on in social media circles about representation of marginalized groups in entertainment. The editors for TUF 26 must have been aware of that, as they made sure to include a conversation between Shana Dobson and Sijara Eubanks about coming out. Dobson’s girlfriend was also heavily featured in her pre-TUF home video. While there have been out fighters on all of the TUF seasons featuring women, this is the first time I can remember them presenting lesbians of color, especially in a manner that felt like no big deal. It’s kind of funny how our sport is ahead of the curve on some things.

#3) Redemption Strong – From the episode’s opening at the tryouts to the post-fight interview, “The Happy Warrior” Roxanne Modafferi was focused on one thing. That was redemption. She repeated how she wanted to show the fans that she “doesn’t suck anymore.” We hardcore fans would not need convincing, especially after seeing her run in Invicta. The casual fan, though? They would need that nudge to see how  much Roxanne has grown since her stint on TUF 18. She did not disappoint, stopping her opponent in the first round.

Stock up – Roxanne Modafferi. As I mentioned during The Big Three, this episode was the start of “The Happy Warrior’s” personal TUF Redemption story. From being awarded the #1 Seed, to her first round TKO victory, everything’s coming up Roxy. It’s hard not to see that she has vastly improved as a fighter since TUF 18.

Roxanne Modafferi (#1) squared off with striking specialist Shana Dobson (#16) in the first bout of the season. Modafferi kept her composure while Dobson initially attempted to pressure from distance. It was only a couple of minutes before “the Happy Warrior” was able to close the distance, take Dobson down, and stop the fight with ground and pound in the first round.

Next week, Deanna Bennett (#4) will take on Karine Gevorgyan (#13) in the second preliminary bout. Also, what kind of drama and craziness can we expect from the fighters this season? Keep it locked to MMASucka.com for the next TUFtermath!