Rick Glenn Settles Into Team Alpha Male Ahead of UFC 215 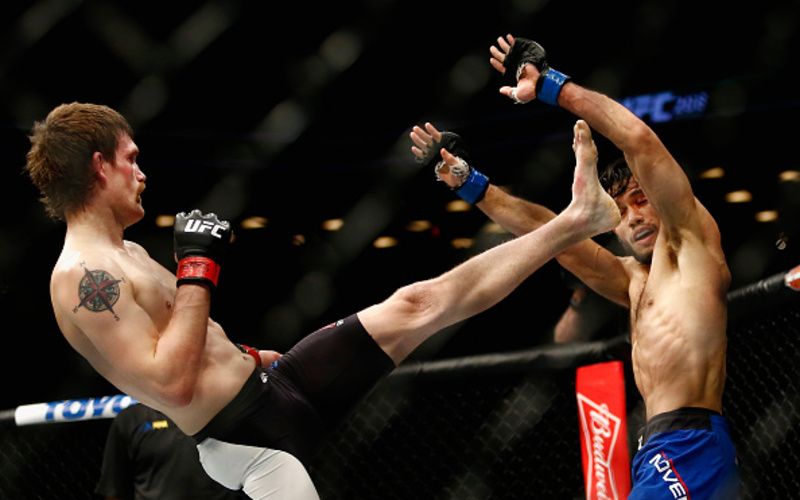 Another UFC fighter has joined the ranks of Team Alpha Male. Rick “The Gladiator” Glenn (19-4-1 MMA, 1-1 UFC) and his wife sold their house in Milwaukee and moved to California after his UFC 208 win over Phillipe Nover in February.

Glenn, 28, told MMASucka that the couple had been considering a move to California for awhile now, and wanted to make sure that his spouse was ready before moving to the west coast. Glenn said that it was actually his wife’s idea for the featherweight to check out Team Alpha Male.

Before uprooting, Glenn had wanted to make sure that he would be welcome at his potential new gym.

“They said I was more than welcome,” he said. “I liked it there. Good atmosphere, good training partners. I told them my intentions and they were cool with it.”

Glenn completed his first camp at his new home ahead of Saturday’s UFC 215 bout against Gavin Tucker, and has immediately noticed improvements in his training regimen.

“I’m actually training with people in my weight class,” he said. “Normally I train with people a little heavier.”

Glenn said that now that he can train with people his size, specifically fellow featherweights Darren Elkins and Andre Fili, the largest difference is the speed of his partners.

“We train at a pretty high pace at Team Alpha Male,” he said. “The change in pace is going to help me a lot in this fight.”

Glenn, who’s had an 11-year MMA career, said that he views Tucker as his biggest challenge to date, though he feels that his next fight is always his toughest challenge, whoever the opponent may be.

Tucker stands at an undefeated 10-0 in his MMA career, and has earned the excitement of fans after he cruised to a unanimous decision victory over Sam Sicilia in his UFC debut. Glenn sees the fight as an opportunity to put his own name in fans’ mouths.

Glenn is no stranger to important bouts. He fought top-15 lightweight Evan Dunham up a weight class in his own UFC debut, and is the former WSOF featherweight champion; he defeated Georgi Karakhanyan via injury TKO back in 2014 for the title.

While there is no belt on the line or mystique surrounding a promotional debut in this fight for Glenn, a win over Tucker could certainly draw the respect of fans that see the potential in the young Canadian.

Other than the result of the fight, the most important question that remains is: what will Glenn do with his facial hair for the fight?

“You’ll have to wait and see for that one,” he said with a laugh. “We’ll have to see how I’m feeling. If I’m feeling extra nasty and dirty, the mustache will come out.”