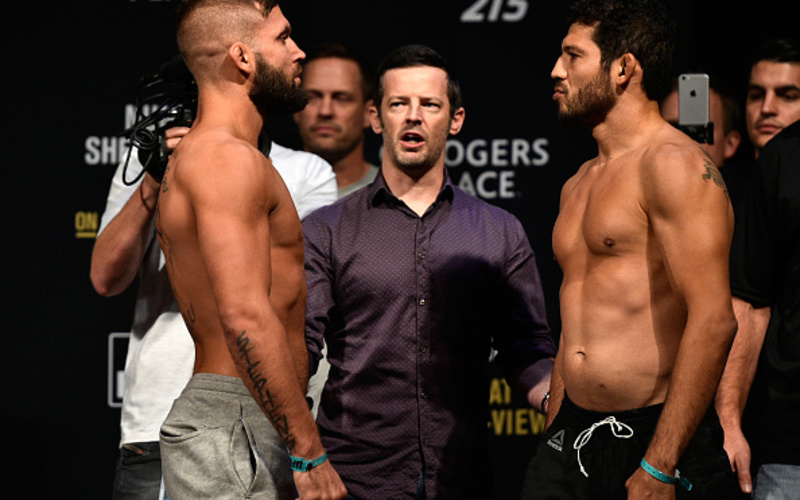 The UFC’s most dominant champion Demetrious Johnson was looking to make history with an eleventh title defense against Ray Borg in UFC 215’s main event. Unfortunately, the fight was scrapped. The co-main event of the night, now the main event, sees a women’s bantamweight title rematch between Brazilian powerhouse Amanda Nunes and striking ace Valentina Shevchenko. We look ahead to the weekend’s most compelling bouts and break down the action.

Sleeper Fight of the Night

This is a do or die fight for Gilbert Melendez. Coming off three straight losses at lightweight, Melendez drops to 145lbs to take on the heavy-handed Jeremy Stephens. Had this fight taken place in 2012, Melendez would have been a huge favorite, but Stephens has become a solid top ten fighter at featherweight. In recent years, defeating the likes of Darren Elkins and Dennis Bermudez, and also turning in good performances against Frankie Edgar and Cub Swanson, makes him an interesting opponent. Melendez is the more well-rounded fighter, and his durability has never been in question, but cutting to 145lbs for the first time in a decade to meet a power puncher will be a serious challenge.

Lock of the Night

Adriano Martins is a wrecking machine against all but top twenty to top fifteen-ish opposition at lightweight. His demolitions of Islam Makhachev, Juan Puig and Daron Cruickshank strongly attest to this. A win over Rustam Khabilov, and a very competitive split decision loss to the extremely underrated Leonardo Santos, further bolster his case.

Kajan Johnson is a fun veteran riding a two fight win streak over, frankly sub-UFC competition, in TUF China winner Zhang Lipeng and Naoyuki Kotani, who has an 0–5 record with the promotion. Given Johnson’s chin issues, not to mention the broken eye socket and broken jaw he has suffered in the past, Adriano Martins is a dangerous fight for him. Add to this that Johnson is returning from a nearly two-year layoff, and it is pretty clear that the UFC made this fight as some kind of punishment for publically blasting the Reebok deal.

In any case, Martins to defeat Johnson, likely by knockout, is a lock.

Seth is an avid reader and writer with a deep knowledge of and appreciation for mixed martial arts, having followed the sport closely since 2012.

He is based out of New Zealand where he studies at the Victoria University of Wellington, currently completing his Bachelor of Laws. Seth spent four years training and competing in Judo throughout high school but his true passion is for Brazilian Jiu Jitsu, which he has travelled to Gilbert Melendez's El Nino gym and Simpson Go's Cobra Kai gym to pursue.