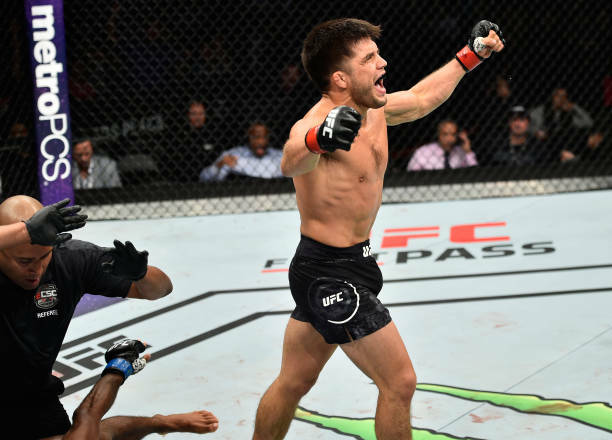 Henry Cejudo‘s game has historically fit into the traditional wrestle-boxer mold. His high-volume, meat-and-potatoes boxing game allows him to strike his way in and out of the clinch, though he’s also active with kicks at distance. Despite winning an Olympic gold medal in freestyle wrestling (for those of you who haven’t yet heard), Cejudo has always trended more toward the boxing side of the style. UFC 215 saw more of the development of a wrestle-boxer

Making his top game work in MMA has been a struggle for Cejudo, as has controlling the clinch against strong competition. Although many were surprised when flyweight champion and pound-for-pound king, Demetrious Johnson, sliced Cejudo up in the clinch, the openings were visible even before Johnson ruthlessly exploited them. Re-visit Cejudo’s fight with Jussier Formiga and you’ll notice that he gives Cejudo fits in the clinch by digging his head in, angling off, and going to work with knees.

His failure to dominate with grappling lead to a sort of identity crisis. His boxing was designed to take him into the clinch with consistent flurries, but he often struggled once he got there. His kicks on the outside were sound, but not strong enough to decisively win fights on their own merit. Henry Cejudo was good everywhere, but no particular area of strength stood out. This can be seen in close fights with Formiga and Chico Camus, in which Cejudo outstruck his opponent but failed to put a decisive stamp on his victory.  It would come back to hurt him later in his career against Joseph Benevidez, when two of three judges decided that his offense hadn’t been enough to win the fight.

It’s important to keep in mind that Cejudo only has four years of professional competition under his belt, and his title shot came just past the three-year mark. This means that he isn’t even close to a finished product and will likely be making large improvements and alterations to his game in between fights. Cejudo’s thorough drubbing of a top-five opponent in Wilson Reis at UFC 215 marked one of these great leaps forward.

Cejudo abandoned his narrow stance and tight guard in favor of a wider, more bladed stance and an extended lead hand. As someone who has often had trouble closing distance safely, Cejudo’s longer stance left his lead hand closer to Reis and put more distance in between his head and Reis’ punches.  Maximizing his distance allowed Cejudo to sit back and lead Reis onto him, opening up counter opportunities when Reis took the bait.

The extended lead hand allowed Cejudo to hand-fight effectively.  In a match between an orthodox opponent and a southpaw, the lead hands fall on the same side, making it more natural to jostle with an opponent’s hand for position. Hand-fighting can serve many purposes – measuring distance, removing the threat of an opponent’s lead hand, distracting them, or flinging their guard away to create an opening. Cejudo used his lead hand to frustrate Reis. He was constantly controlling and stuffing the lead hand, denying Reis the ability to measure distance and set up entries with it.

Cejudo’s extended lead hand encourages Reis to jab into it. Reis seeks to measure the distance between him and Cejudo, but Cejudo’s hand is extended far away from his face. As a result, Reis doesn’t have a good read on how much distance he needs to cover in order to reach Cejudo’s head. However, jabbing into the lead hand does give Cejudo the knowledge of how far Reis’ jab can extend and how much distance he needs in order to remain safe. As soon as Cejudo retracts his lead hand, Reis springs in with a jab that falls short. Confident in his distance, Cejudo stands his ground and parries the jab, landing a sharp counter straight behind the ear as Reis leaps in.

In his fight with Benavidez, Cejudo would often retreat straight backwards when pressed. He did a much better job of angling off against Reis, particularly to the inside angle. The inside angle is often readily available in a southpaw/orthodox matchup. A common tactic in open guard engagements is stepping outside of the lead foot, and this can expose the inside angle if one isn’t careful.

Reis steps outside Cejudo’s lead foot, thinking about throwing the straight.  Cejudo bounces toward Reis’ center line, squaring him up, and counters.

The knockout came in a similar manner. Cejudo didn’t get his lead foot on the center line, but his constant circling toward the inside forced Reis to turn and keep up with him. A quick straight while Reis was turning put him on his back and Cejudo followed up on the ground for a knockout victory.

The inside-angle straight is a favorite of Conor McGregor, and Johnson used it to great effect in his recent title defense against Reis. McGregor’s coach, John Kavanagh, even commented on the similarity to McGregor in Cejudo’s new style:

Something about Henry reminds me of someone's style…

The kind of bouncing footwork you see from a lot of fighters with backgrounds in traditional martial arts is useful in many respects, but also risky. It can be used to disguise the rhythm of entries, draw opponents onto counters, and quickly close or create distance. If you need to be convinced of its utility, go watch Kyogi Horiguchi get the better of everyone he’s ever fought on the feet, including pound-for-pound king, Johnson.

But it also has drawbacks. Bouncing with a wide stance–not the short, tight hop-steps of boxing–necessitates taking both feet off the ground briefly. This means that, if a fighter is caught mid-bounce, he won’t have the positioning or stance to react. Closing distance as an opponent bounces in, or kicking the trailing leg as they bounce out are high-percentage solutions.

Shortly after Cejudo landed his first inside-angle straight of the fight, Reis adjusted and kicked his trailing leg as he bounced out. For his part, Cejudo immediately took it back by countering with his own kick.

Before his fight against Reis, Cejudo would often eat shots due to standing in front of his opponent after entering with punches. Here he was much more disciplined about exiting on angles.

As Cejudo throws his straight right, he steps his rear leg in behind it at an angle, exiting on a different line than he entered on. When he throws the leg kick, he turns his foot out to open up his hips and steps directly behind it to a new angle instead of pivoting his lead foot back to its starting position. As a result, Reis has to turn to line him up and is unable to land counters as he exits.

Cejudo’s defense in the pocket looked sharper than ever. He’s previously gotten hit for keeping his head upright in exchanges. He could duck or slip an initial punch well, but his head movement tended to fall apart amid exchanges or when faced with combinations.

Note how Cejudo stays in the pocket, sees the lead hook coming, and makes a defensive movement in response. Not only does it prevent damage, but it also allows him to continue his offense unimpeded. He’s no Jose Aldo and his defense still needs a lot of cleaning up. But even Aldo was no Jose Aldo four years into his professional MMA career. Cejudo also looked more comfortable applying his kicks at range, even showing off some new set-ups.

Cejudo has never been one to “lay down” on his kicks. According to some kickers, this is blasphemy since it leaves the head on the center line to be hit.  But really its a question of priorities. Cejudo often uses his kicks to open up his hands.  Kicking while remaining upright allows him to quickly continue his forward momentum and step in to punch off his kicks, rather than leaning to take his head off-line. Andy Ristie is perhaps the best example of the benefits of upright kicking, using it to shift forward and land his punches.

Here Cejudo gives Reis a little shove after landing a kick to break his balance and open him up for punches.

This is a crafty little set-up. Cejudo punts Reis’ lead leg out from under him.  Then he steps out with his lead leg, opening his hip as if he’s about to throw another round kick, before coming up the middle with a knee. Reis picks his leg up to check the kick he thought was coming and ends up eating the knee.

Cejudo feints and Reis responds by dropping his lead hand to his stomach and ducking down in a poor imitation of the Philly Shell. But as soon as he comes out of his crouch, his lead hand covers his head, leaving the body exposed.  Cejudo initially goes to the head, but Reis is able to block his flurry. Cejudo feints again and Reis shows the same response. Finally, Cejudo shifts his weight onto his lead hip while stepping in and showing the right hand, prompting the shell by Reis. This time, Cejudo hooks the body as Reis’ lead hand rises to his head.

Although you would expect a gold-medalist wrestler to excel in the grappling department, Cejudo has had a difficult time controlling opponents on the ground. In his fight with Chris Cariaso, he hit six takedowns but was unable to do much on top. He would try to pass guard and give up an underhook to Cariaso, who would use it to stand up, or else he’d just end up stalled in guard. Cejudo mounted him briefly at one point, only for Cariaso to quickly re-establish guard and threaten a leg lock.

Wrestlers have to learn a new positional hierarchy and method of approaching grappling when transitioning to MMA.  It’s easy to leave the folkstyle control behind and fall into the Brazilian jiu-jitsu progression of passing the guard, mounting or taking the back, and submitting, but that might not be the most effective method of control for wrestlers.

Cejudo was flirting with the folkstyle metagame in this fight, which may provide a glimpse into future developments in his game.

At one point, Reis shot for a failed takedown and Cejudo used a cradle to get behind him. He avoided taking the back and went right into a ride, looking to land ground and pound.

When Reis stood up, Cejudo controlled his right hip and used his left arm to punch. This forced Reis to shell up. With Reis arms protecting his head, his elbows came away from his body and created space for Cejudo to secure a body lock. Cejudo then stepped around and returned Reis to the mat by forcing his weight onto his hands and twisting to break his base.

Interestingly, Cejudo skipped collegiate folkstyle wrestling and went right into olympic freestyle after high school. It’s often said that folkstyle translates better to MMA due to its prioritization of control and riding. This is a decision that may have hurt Cejudo in his ability to control opponents on the ground.  Reis was able to roll back to guard out of Cejudo’s ride and stand up.

For a more in-depth look at the folkstyle metagame as it relates to MMA, BJJ Scout has an excellent youtube channel with several film studies on folkstyle tactics in MMA.

At 30-years-old, and with only four years of professional competition behind him, Henry Cejudo has all the potential in the world. He’s still in the development stage of his game, figuring out where he wants to be and what works for him, and he’s already one of the best fighters in his division.

Cejudo wasn’t ready for a shot at Johnson when he received it, but he’ll get another crack at the flyweight belt eventually. Hopefully the UFC holds off on giving it to him for a while in order to allow his game more time to fully develop.