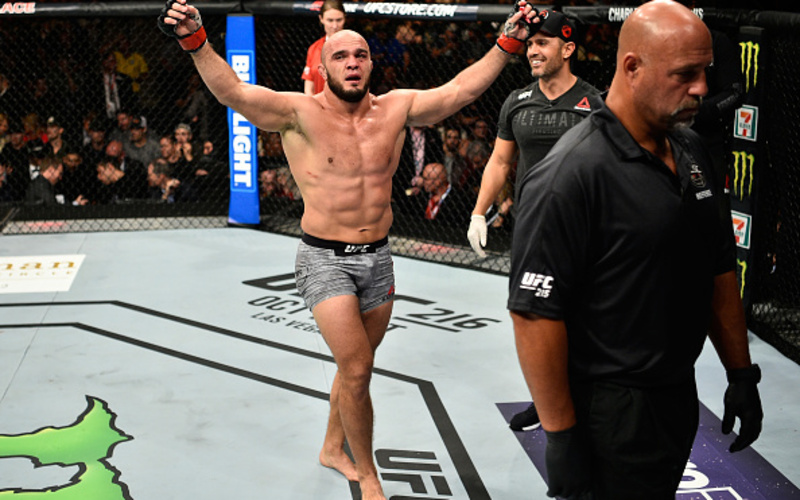 Ilir Latifi Returns from Brutal Knockout to Get Convincing Win

The last time we saw Ilir Latifi in the cage was over a year ago. It was UFC Fight Night 93, and his face was being unceremoniously blasted by Ryan Bader’s knee. After that shot, Latifi hit the mat with enough violence to make even hardened MMA fans wince a bit. It was the kind of brutal finish that either shakes a fighter’s confidence and derails his career or causes him to step back, reassess, and come back stronger. Latifi chose the latter.

It’s easy to forget that Latifi, now a fixture of the UFC’s light heavyweight division, got into the organization under the most longshot of circumstances. If he hadn’t been called in as a last-minute replacement for Alexander Gustafsson against Gegard Mousasi, Latifi may have never gotten to the big stage. Yet the Swede has now gone 6-3 in his UFC tenure and is ranked in the top ten. The fact that he’s only five-foot-eight at light heavyweight makes his success all the more impressive – and harder to believe.

Leading up to UFC 215, a lot of people wrote Latifi off as a stepping stone for Tyson Pedro’s ascent. Pedro, a gifted athlete with a ton of potential at only 25 years old, came into the fight undefeated. He looked like an undefeated fighter as he walked to the cage, too, wearing a carefree smile and looking very confident.

Latifi didn’t mind being written off as a stepping stone. “It’s just business,” he said after the fight. That workmanlike attitude is exactly how he went about putting the brakes on the Pedro hype train.

Latifi’s game plan was to strike with Pedro, but after taking a few shots he quickly changed his mind and switched to his bread-and-butter – relentless grind and nuclear-powered takedowns.

Though the final result was a 30-27, 29-28, and 29-28 unanimous decision for Latifi, Pedro had his moments, for sure. He landed a couple body kicks that clearly hurt Latifi. He also busted up the Swede’s eye with some long jabs. All in all, Pedro exhibited the tools and athleticism that have won him so much buzz from around the MMA community. He just wasn’t quite ready to crack into the top 10. Not on this night, anyway, and not against Latifi.

Latifi pressured Pedro relentlessly, putting him up against the cage or on the ground for most of the fight. Latifi’s best moment came in the second round when he scooped Pedro up into the air and smashed him headfirst onto the canvas. It was a hell of a sight to see five-eight guy hay-toss a six-three athlete. The strength it takes to overcome such a disadvantage in leverage is hard to fathom.

By the third round, Pedro looked tired and beaten. It was the first time he’d ever fought longer than four minutes and ten seconds. He never quit and actually landed his best shots of the fight in the third round, but he just didn’t have the gas to turn up the heat enough to get a finish. When Latifi again planted him on the ground, Pedro didn’t have enough wind left to resist, and the fight ended there.

Outlook in the Aftermath Looks Just Fine for Both Fighters

Ultimately, Pedro didn’t lose much. He’s clearly going to be a force at light heavyweight and is young enough to chalk up this fight to a learning opportunity.

Latifi, meanwhile, delivered a physically dominating performance. At 34 years old, any run he plans on making at the title needs to start now. After the fight, he made it clear that that’s exactly what he intends to do. He’s not in the UFC to be a gatekeeper or a stepping stone. He’s asking for a top five opponent, and he’s in the game to become champion. Whether or not that works out, only time will tell.

Either way, Latifi secured a quality win against a dangerous young fighter, and so one of the more improbable UFC stories continues to unfold.

Jeff Suwak lives and writes in the great Pacific Northwest.