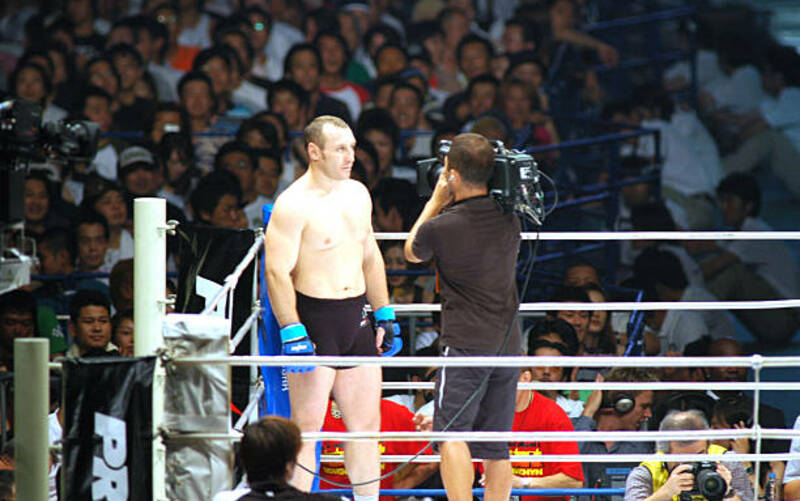 It’s probably difficult for new MMA fans to understand the thrill of fights such as the one that “Ice Cold” Igor Vovchanchyn and Mark “The Smashing Machine” Kerr had on September 12, 1999, for the Pride Fighting Championships (Pride FC). To those of us who cut our teeth on old school MMA, however, it was pure electricity.

In modern MMA, the top-tier fighters are at least competent in every aspect of the sport. Everybody still has their bread and butter, but in any given fight they might pull off something completely unexpected. Neither Vovchanchyn, or Kerr, fit that bill. Each guy was really good at one thing, while being pedestrian at-best at everything else. Such lopsided talents wouldn’t be taken seriously in today’s sport.

The pace of fights in MMA’s past was very different, too. Fighters could stall for far longer than they can nowadays. Many fans at a modern MMA event would explode simultaneously if a fighter were allowed to ride top position while doing no significant offense, for as long as fighters could in Pride FC at that time.

Because of the one-dimensional skill sets, and the pace of the fights, today’s fans would probably find it hard to see the excitement that Vovchanchyn versus Kerr held for old-school fans.

Old school MMA had its own unique brand of magic. This isn’t to say it was better than what we have now, and I have no desire to get into some goofy pissing contest over that. Old school MMA was just different, and it was the kind of things that will never be replicated in the sport again. And those of us who were watching at the time will never forget it.

As Royce Gracie has said, modern MMA is all about the fighters and their preparation. However, old-school MMA was all about styles. The real thrill came from seeing one martial art tested against another, and the most passionate theme of debate was whether striking was better than grappling, or vice versa.

Elite fighters were becoming a little bit more well-rounded by 1999, but for the most part, everyone still had a very clear path to the victory. The utterly lopsided nature of many of these contests is what made them so intriguing.

No Margin for Error

A palpable tension filled the air when pure strikers and pure grapplers battled. You just knew that the tiniest mistake could end the entire fight. One wrong move by the grappler and he might get leveled by a counter strike. One whiffed shot by the striker and he might get taken down, and never get back up again. It felt like there was no room for error on either side, and that was exciting to watch.

This “pure striker” versus “pure grappler” dance still played-out regularly in 1999, but nowhere did it play-out so clearly as it did in the battle between Vovchanchyn and Kerr. While commentating the fight, Stephen Quadros called Kerr the number one heavyweight in the world at the time, with Vovchanchyn coming in second. I can’t honestly claim to remember where they stood in any kind of rankings, but I do remember feeling like they were the very best the sport had to offer in ’99.

Could Kerr get past Vovchanchyn’s infamous pancake sprawl? Could Vovchanchyn catch Kerr with a knockout shot before going down? Everyone had an opinion. Everyone was pumped up to see how it’d play out. Watch the replay today, and I suspect that many newer fans wouldn’t understand how the hell the contest could have been considered so epic.

Vovchanchyn and Kerr: As Alike as Arnold Schwarzenegger and Danny DeVito

Vovchanchyn versus Kerr was the old school MMA equivalent of the film Twins. The two men couldn’t have been more different. Vovchanchyn was a short, stocky (some may even say “fat”) guy that looked like a cue ball with biceps. He was also a devastating striker with a penchant for knocking out grapplers in an era when grapplers usually ruled the roost.

Kerr, meanwhile, was 6′ 4″ and built like something out of a Marvel Comics super villain factory. On top of that, he was a dominant wrestler. He’d developed some passable striking under the tutelage of Bas Rutten, but there was never any mistaking where his path to victory lie. Kerr was there to take a man down and smash him. Period.

The one thing both men had in common was that they were elite MMA fighters. Vovchanchyn was 38-2 going into the fight. Kerr was 11-0. Both had far more finishes than decisions on their records. For all their mutual accomplishments, it was very unlikely that any MMA newbie would have picked Vovchanchyn to win the fight as the two men stood across from each other in the ring. Fans would soon be reminded, however, that one of the best things about MMA is its persistent habit of showing us that looks can be deceiving.

Even Vovchanchyn looked a little intimidated by Kerr’s physique as they met in the middle of the ring to hear the referee’s instructions. Once the bell rang and the fight began though, he was ready to roll as usual, with all the cool demeanor that earned him the moniker “Ice Cold.”

Somewhat surprisingly, Kerr actually threw the first shot. It was a lumbering jab-type thing followed up by an awkward kick. Once the two collided clumsily, things started to heat up.

Kerr nearly got Vovchanchyn down but was blocked by the ropes. He then landed a knee to Vovchanchyn’s head as they came out of the clinch. Then, about 45 seconds into the fight,  Vovchanchyn caught a Kerr low kick and countered with a huge overhand right that put Kerr on the mat. It was the classic Igorian hammer of god.

Things stayed high-paced for a couple minutes, but Kerr eventually secured a takedown. From there, the vast majority of the first round’s 10 minutes was spent with the American lying on top, while the Russian pecked at the side of his face with knuckle-shots.

Nobody would call the fight high-paced from there, but it’s a grueling thing to watch. Many fighters mentally break under the pressure of being held down for several minutes, helpless to get to a better position. But Vovchanchyn just looked perpetually angry and impatient to get to his feet and start reigning hell.

Into a Second Round

The fight went to the second round, and Kerr got Vovchanchyn down again pretty quickly. This time, though, something changed. In addition to looking physically exhausted, Kerr seemed mentally distant, like he just wanted to get the whole thing over with as safely as possible and go home.

When Vovchanchyn kicked Kerr off of him, the wrestler looked utterly exhausted. The documentary The Smashing Machine would later reveal that Kerr was dealing with personal demons back then. At the time though, it was unclear what was going on. Nobody really cared for all that drama anyway, as Vovchanchyn sprawled on a shot and began kneeing the hell out of Kerr’s head.

Kerr went limp as if knocked out, though it didn’t look like he was actually unconscious at any point. As he commentated, Rutten agreed that the whole thing looked a little strange.

As quickly as Kerr slumped to the mat, he snapped right back to full awareness after the ref stopped the fight and started complaining about Vovchanchyn’s knees being illegal. Whether Kerr was ever actually out or not, the more important issue is that he was right about the knees. He’d been a downed opponent, and Pride FC rules didn’t allow knees to the head of a grounded opponent.

As Vovchanchyn danced around the ring in victory, the fact was that he’d broken the rules. The bout was later ruled a no contest. A rather unceremonious end to what was, a true clash of titans. I get the feeling that people watching now wouldn’t feel too inspired by the battle. Far too much time was spent with Kerr lying on top of Vovchanchyn, while Vovchanchyn lay robot-like punching Kerr’s face with weak, ineffective shots.

In the context of the time however, it was a monumental battle between pure striker and pure grappler. A clash of styles truly emblematic of old school MMA. In that space in time, Vovchanchyn versus Kerr was about as exhilarating as MMA got. Maybe you just had to be there.

Jeff Suwak lives and writes in the great Pacific Northwest.