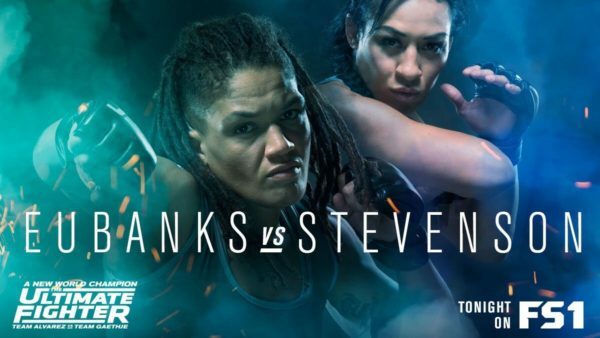 The TUFtermath for The Ultimate Fighter Season 26 is back again this week. Featuring fifth seed Maia Stevenson taking on twelfth seed Sijara “Sarge” Eubanks, this was also the first episode to show signs of drama. The aftermath of Lauren Murphy’s loss last week revealed a fighter who did not handle things as well as her coaches would have hoped. We’ll look at that and more as we look at the key aspects of this week’s episode of TUF 26.

#1) Everybody Deals Differently – Team Alvarez fighter Lauren Murphy was not like her teammates in dealing with a loss. Crushed under the weight of her own expectations, the UFC veteran needed time to work through it and skipped morning practice. This did not please head coach Eddie Alvarez, who had hoped she would show up to help keep team morale up. The two mildly clashed over the difference of opinion at the afternoon practice, and sowed seeds of discord that may bloom later on in the season.

#2) Weight Control – Sijara Eubanks is not a small flyweight. She may well be one of the largest fighters in the competition. It was only natural that she just barely made weight. In fact, she had to trim a significant portion of her hair to do so. It’s not Cody Mackenzie donating blood to make weight, but it’s still on the scale of extreme measures.

#3) Somebody Had to Say It – Echoing what a large number of fans had been saying on Twitter, Eddie Alvarez referred to Barb Honchak as the real number one seed.

Stock Up – Sijara Eubanks. While she was seeded at twelfth, Eubanks definitely made the case tonight that she should have been higher. Maybe not the Top Four, but certainly Top Eight.

Stock Hold – Eddie Alvarez. While I entirely get Alvarez’ point about showing up, I also see Murphy’s about needing time to process her defeat. I think it was more of a reflection the two not having enough time to properly gel as fighter and coach, not a failing on either person’s part.

Stock Down – TUF Talk. We don’t get the post-show in Canada, but every so often we hear about something egregious. This time, the TUF Talkers showed that they did absolutely no research and made the demonstrably false claim that Eddie Alvarez had never trained with women before this season of TUF. WMMA OG Tara LaRosa was quick to jump in, as you’ll see in the tweet below. This is not a good look for official UFC programming.

Hey @KarynBryant … @Ealvarezfight has trained and coached women before. I trained with him at Philadelphia Fight Factory for 4 years ?‍♀️ pic.twitter.com/EHVZCYIAyF

The bout between Team Alvarez’ Sijara Eubanks and Team Gaethje’s Maia Stevenson was best described as a “mugging.” While it seemed like it would be competitive at the start of round one, that impression changed the moment that Eubanks could lay more than a fist on Stevenson. While the pair looked fairly even at punching range, it was all “Sarge.” Whether it was on the mat or in the clinch, Sijara Eubanks controlled Maia Stevenson for the duration until getting the submission victory with a picture-perfect kimura/double wrist lock in the second round.

Next week, Barb Honchak (#2) of Team Alvarez takes on Jillian Robertson (#15) of Team Gaethje. It will be interesting to see if the young upstart, Robertson, can bring the fight to veteran and former Invicta FC flyweight queen, Honchak. Keep it locked to MMASucka.com for more MMA news and opinon, as well as the next edition of the TUFtermath!